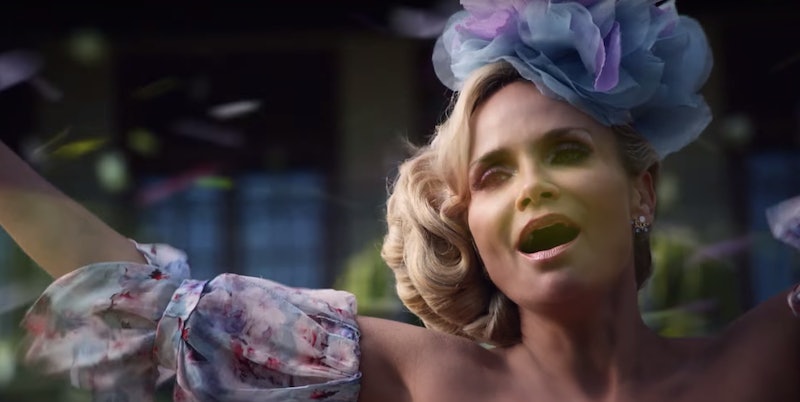 Season 2 of American Gods picks up exactly where Season 1 left off, but there are some elements of the series that changed in the nearly two-year gap between the premieres of Season 1 and Season 2. Perhaps one of the biggest shifts is that the god Easter, played by Kristin Chenoweth, is suddenly inconspicuously missing while many of the other Gods are still present. Easter may be out for good, leaving fans to wonder if this is what happens to Easter in the American Gods book or if the writers will have to come up with another storyline for her.

Chenoweth left the show between seasons, soon after the departure of showrunners Bryan Fuller and Michael Green over what Deadline describes as conflicts over the show's budget with producer FremantleMedia. Chenoweth told TVLine that her reason for leaving American Gods was an act of solidarity with longtime friend Fuller, whom she previously worked with when she played the Emmy-winning role of Olive on Fuller's short-lived series Pushing Daisies.

"I couldn’t come back without him,” Chenoweth revealed to the publication, “It wouldn’t be right ... He's my guy." Chenoweth was joined in her departure by Gillian Anderson, who worked with Fuller on Hannibal and exited American Gods following the showrunner's departure. The writers are reportedly working Anderson's character Media into another, new character.

Easter's role in the American Gods novel is relatively small, but she does have a least one crucial moment that is imperative to the narrative of the novel. After having been recruited to fight alongside the New Gods, despite the fact that she seems relatively fine sharing her name and season with Jesus Christ, Easter proves instrumental in keeping Shadow alive during at least one harrowing moment. After being stabbed, Easter is brought to Shadow to try and heal him. She literally breathes life into Shadow, healing his wound and allowing him to continue his role in the epic struggle.

It's a minor but crucial moment, and one that the current showrunners will have to find a creative way to adapt if they hope to keep that dramatic moment but substitute the God that plays such an important role in it.

American Gods is still quite a distance from the moment in the book in which Easter's heroic resurrection occurs, which means the current showrunners have plenty of opportunities to craft a new rendition of the scene or decide if they even want to bring the scene in questions to their adaptation. The book and show both make a big to-do about Easter's ability to bring people back to life, suggesting that there's some exclusivity to her abilities, which makes the problem of finding a new solution while staying true to the lore of the original novel even more difficult. While the show will likely find a way to exist without Easter and Shadow's big moment, there may not be a way to remove the sting of the fact that fans won't get to see Chenoweth performing her character's heroic act.