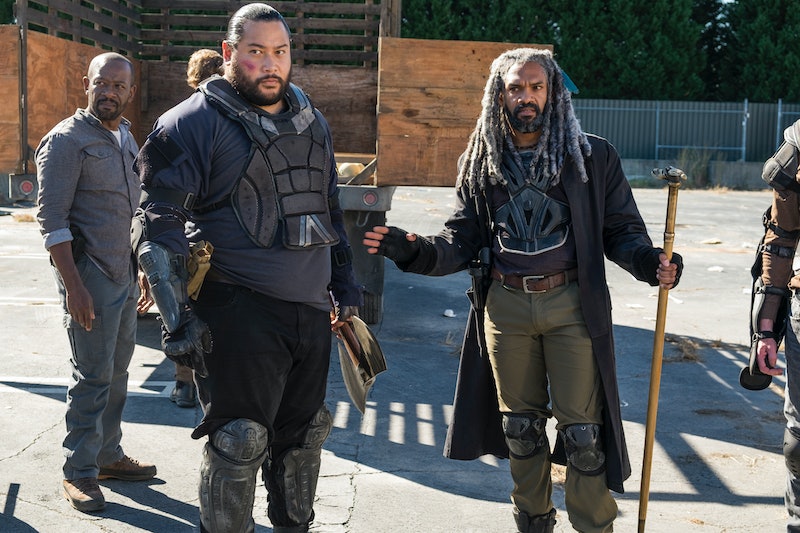 Since his introduction to the world of The Walking Dead, King Ezekiel has made a memorable impact — and not just because he walks around with an enormous tiger named Shiva. His community, The Kingdom, projects a safer, more comfortable vibe than Alexandria and, of course, Negan's Saviors. But nothing good lasts forever, so viewers may want to know what happens to Ezekiel in The Walking Dead comics.

On the AMC series, the Kingdom is already plotting how to take down Negan, which means their rosy way of life is probably coming to an end sooner rather than later. And though the show doesn't always follow Robert Kirkman's comics, they still offer some good clues as to what's coming this season. Spoilers for The Walking Dead comics ahead.

Ezekiel first appears in Issue 108, and one major deviation we've already seen is that in the comics, Ezekiel is in love with Michonne. Not to say that couldn't still happen, but based on last week's episode, I'm pretty sure Michonne and Rick are in it for the long haul. But in the comics, Ezekiel does team up with Rick, just like we're seeing in the show, to take Negan and the Saviors down. Unfortunately, their attempt doesn't quite work and Negan's men get the best of them, just as many walkers arrive. The worst part? Shiva the tiger is one of the casualties.

After all of that happens, Ezekiel kind of loses his stance as a leader and goes into a depressive state for a while. Eventually, he is able to help fight the Saviors once again and returns to the Kingdom — with Michonne. But because no one actually survives in The Walking Dead (OK, almost no one), the king does meet his maker. And sadly, it's partially because of love.

See, Michonne leaves him. But once Ezekiel hears that she still has some feelings for him, he goes after her and encounters a woman named Alpha. She is the leader of the Whisperers, a group that's even more terrifying than Negan's Saviors. (I know, it seems impossible, but trust me.) She decapitates Ezekiel and leaves his head on a stake, where he's later discovered by Rick and everyone else.

As if that isn't bad enough, Ezekiel's head actually reanimates itself. Since Michonne can't do the deed, Andrea (yes, she's still alive in the comics!) does it for her and stabs Ezekiel in the head.

Ezekiel doesn't have to face the same fate on The Walking Dead, so don't start mourning him yet. And even if he does, he could easily stick around for another season or two, since the show is just now getting to the early stages of the war against the Saviors, and the Whisperers haven't been introduced yet. Then again, the AMC series could defy the comics by killing Ezekiel even sooner.

No one is ever safe on The Walking Dead, and knowing all of this about Ezekiel's comic book background doesn't change that.