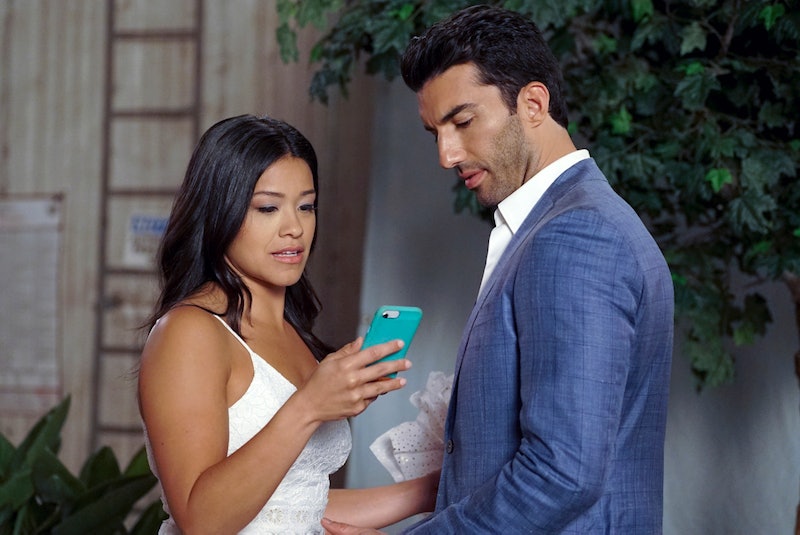 Spoilers ahead for Jane the Virgin Season 5. When Jane Gloriana Villanueva was 30 years old, the romance author's story came to an end. July 31 marks the conclusion of Jane the Virgin's five-year run on The CW, which chronicled seven years in the Miami writer's life. Audiences have been privy to her surprise pregnancy, romantic exploits, publishing struggles, financial woes, and unparalleled dedication to her family. But since it's time to say goodbye, here's what happened to our beloved protagonist in the Jane the Virgin series finale.

"[Telenovelas] always have an ending," Alba informs a devastated young Jane, who's just discovered that her novela is going to conclude. "But it's a happy one. The good people get what they deserve. And there's usually a wedding." So naturally, our protagonist also gets what she deserves. Not only does Jane finally walk down the aisle with Rafael, but she makes a small but important change to her novel, which has the main character turning her story into a telenovela.

Which begs the question: Is this "Jane" in the show actually Jane, or is it an actress playing Jane? After all, the finale confirmed the theory that Mateo is the narrator, so if her son is performing the voiceover on her life, then whoever is portraying Jane is not actually her, right?

Whatever the case, the author's manuscript has already been sent to the printer, thus rendering her ending obsolete. Fortunately, Rafael takes it on himself to deliver her latest version in person, getting himself arrested after exiting the printer's parking lot by accelerating through a barrier. Of course, Jane must bail her husband-to-be out of jail, spending an egregious amount of money to rent a city bus (and bribing all of its passengers) in order to make it to their wedding in time. It would have been cheaper to call another Lyft, but that wouldn't be quite as fun, would it?

There have been several weddings throughout Jane the Virgin's run: Jane and Michael's back in Season 2, Xiomara and Rogelio, Alba and Jorge, and now Jane's literally show-stopping ceremony with Rafael. Whatever your thoughts on her love interest, it's clear that Michael had overstayed his welcome in Jane's life, and it's been satisfying to see her finally move on and settle down with Mateo's father — for good this time.

And their wedding is certainly a moving experience — it is the culmination of five seasons, after all. She and Rafael are predictably a puddle of tears, unable to get through their vows without choking up. They resign to swapping cue cards and reading each other's pledges silently, and have to be physically separated by Alba (their officiant) because they keep kissing each other before her pronouncement.

But of course, the real love story has always been about the three generations of Villanueva women, which is why the the episode's most moving scene contains no dialogue and takes place on Alba's front porch swing. Since Jane's big day is tomorrow, it's the end of an era for the three generations, and they're — understandably — loathe to face the music. Xiomara is moving to New York with Rogelio so they can film This Is Mars (which is confirmed to be his big break in America). Alba will remain in their house with Jorge, while Jane and Rafael begin their new life together.

And so, the most powerful image in the show's finale is not Jane's wedding ceremony — however touching — or the inevitable success of her book. Instead, it's Alba, her daughter, and her granddaughter wordlessly crying while grasping mugs of forgotten tea. These three women have lived either with each other or near each other for their entire lives, and to say anything would be redundant. Although Jane assures Mateo earlier in the episode that they'll FaceTime Xo and Ro every night, his face falls. "It's not the same," he mumbles. "It's just not."

The series has always expertly threaded the needle between self-awareness and self-indulgence, simultaneously parodying telenovelas while itself being one. So just as Jane, Xiomara, and Alba won't be able to watch their telenovelas together anymore on Abuela's couch, neither will audiences be able to watch Jane the Virgin. And so, friends, like all good things, this telenovela has an ending. But it's a happy one.