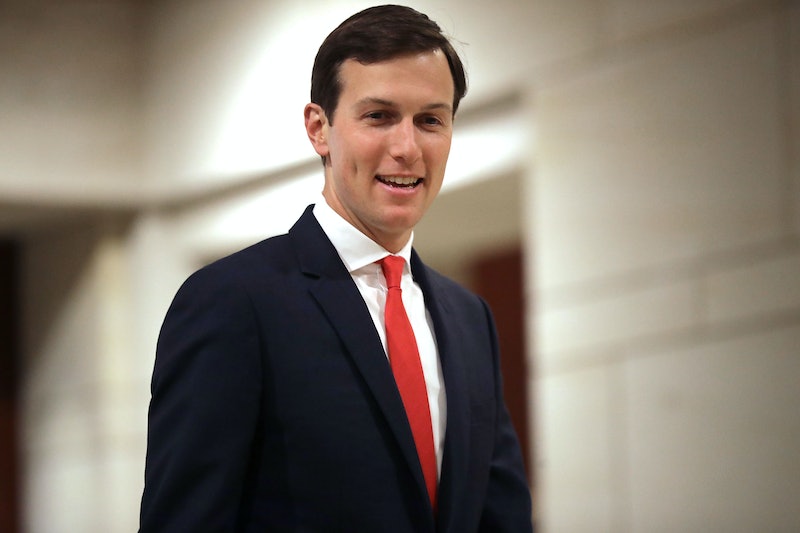 While it's far too early to predict what might happen to President Donald Trump and his administration thanks to independent counsel Robert Mueller's ongoing investigation, it's no surprise that some people are already thinking (and talking) impeachment. But the very idea does raise some questions; like, if Trump had to resign or was removed from office, what would happen to the cast of Trump-associated characters he's stocked the federal government with? For instance, what would happen to Jared Kushner were Trump impeached?

While it's impossible to say with 100 percent certainty, this question really does seem like one of the safest ones to speculate on in all of American politics. Kushner, 36, is the president's son-in-law, and has no prior government experience, or training in any area relevant to the jobs he's been tasked with.

In addition to being a close adviser to Trump, he's also reportedly been put in charge of a sprawling portfolio of sensitive diplomatic jobs, including negotiating peace in the Middle East. In fact, Ashley Parker and John Wagner of The Washington Post described Kushner's portfolio like this:

During the campaign, Kushner began quietly amassing power, acting as a jack-of-all-trades troubleshooter who, by the end, was basically the de facto campaign manager. He also served as the primary point of contact with presidents, ministers and ambassadors from more than two dozen countries and quickly emerged as the phantom chief diplomat within the administration.

That's an absolutely towering amount of responsibility and influence for someone who's only qualification is having married Ivanka Trump. And if Trump were impeached, or left office for any reason, Kushner would almost certainly be riding out of Washington, D.C. on the very same flight.

As for what might happen to him legally, that remains to be seen. Even beyond the ongoing Trump-Russia investigation, Kushner was recently subpoenaed over his businesses' use and promotion of the EB-5 federal visa program. A while a subpoena alone by no means indicates he's guilty of anything, if his father-in-law were no longer the president, the fail-safe possibility of receiving a presidential pardon goes out the window, too.

But as far as his future in politics is concerned, it'd almost certainly be a done deal. Kushner is not a figure of any stature in the Republican Party ― indeed, prior to working on the Trump presidential campaign, he was a Democratic donor ― and absent his father-in-law's orbit, he has no real relevance. In other words, if the Trump administration ever comes to an end, so too will his career in government, clearing their way for some more traditional, establishment Republican officials to fulfill the many roles he left behind.