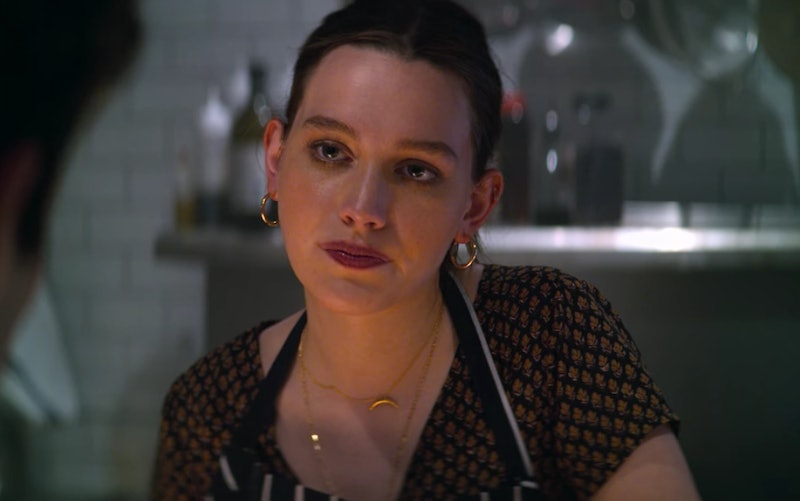 Spoilers ahead for the second season of YOU. Joe Goldberg (Penn Badgley) is handsome, charming, and seems like a catch, so it's only natural that his objects of obsession would be oblivious to his murderous tendencies. And in YOU Season 2, Love Quinn (The Haunting of Hill House's Victoria Pedretti), fills the Beck-shaped hole in Joe's heart. You can't help but wish she'd keep her distance, but it seems like Joe has found Love — in every sense of the word. And since the Lifetime-turned-Netflix show is based off a book series by Caroline Kepnes, it's interesting to see what happened to Love in Hidden Bodies — the second installment of the book series — and if it matches up to the show.

Kepnes's first series installment, YOU, was published in 2014 and covered Joe's ill-fated relationship with Guinevere Beck. Hidden Bodies came out in 2016 and followed a similar plot to the one featured in the Netflix show's second season. But while the TV version shows Joe moving to L.A. to escape his ex-girlfriend, who has mysteriously resurfaced, the antagonist killed Candace at the end of the first book, per Entertainment Weekly. As a result, Hidden Bodies opens with the bookstore owner still living in New York and dating a girl named Amy, per the Guardian. Joe's girlfriend robs him, however, and flees to SoCal, where he follows.

Eventually, however, Joe begins seeing Love, whose parents own a grocery store. But instead of being an aspiring chef/baker like in the show, Love wants to be in the entertainment industry, per EW's book review. But after they fall for each other, it seems like Love is doomed for an unhappy ending — and she gets it, though not in the way readers might expect.

According to a fan blog synopsis of Hidden Bodies, Joe tells Love everything, and she actually forgives him!!! Oh yeah, and she's pregnant (because of course). Eventually, the police catch up with Joe and put him in jail, which is where the second book ends, per the blogger's rundown. But since there will be at least two more books in the YOU series, per EW, it's likely that Joe will get out in no time. After all, he's got a baby on the way.

However, this doesn't mean that YOU Season 2 will unfurl the same way as Hidden Bodies. In an interview with the Closer Weekly podcast Classic TV, Kepnex explained that the show will diverge from the book's plot this season, per Refinery29. "[Joe] meets [Love and Forty] in the show, and their family owns a bunch of grocery stores, so we have that, too," Kepnes told the podcast, referring to Anavrin, the store all three of them work at in Season 2.

But while there will be plenty of plot points that Hidden Bodies readers will recognize in Season 2, the author assured listeners that there will be "twists," too. "[A]s soon as you think you're comfortable and you know what happens next, there are going to be things that are different," Kepnes continued. "Whether or not you read the books, you're going to be surprised."

So whether that includes Love's baffling acceptance, audiences will just have to watch Season 2 and see for themselves.

More like this
'Bridgerton' Star Nicola Coughlan Confirms Season 3 Will Focus On Colin & Penelope
By Grace Wehniainen and Alyssa Lapid
Michael & Kathleen Peterson’s House From ‘The Staircase’ Has New Owners
By Kadin Burnett and Kayla Blanton
'Bridgerton' Season 4 Will Likely Focus On This Brother's Divided Heart
By Grace Wehniainen and Alyssa Lapid
The Time Traveler’s Wife Book Has A Heartbreaking Ending
By K.W. Colyard
Get Even More From Bustle — Sign Up For The Newsletter