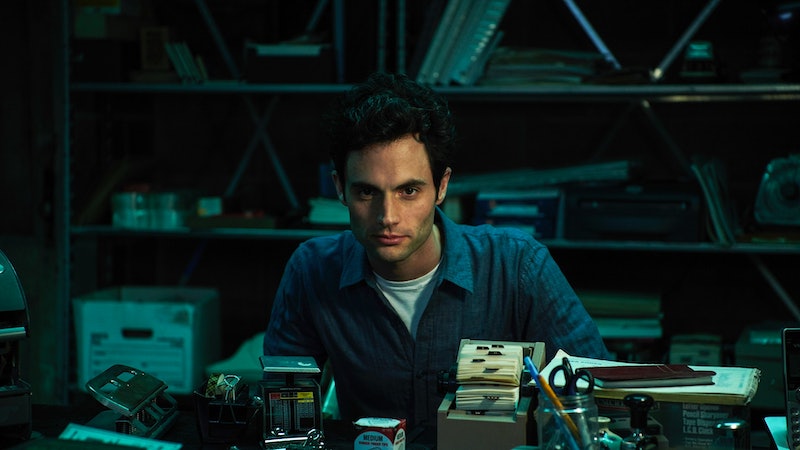 If your Netflix queue has been in desperate need of YOU Season 2 — you're not alone. While fans eagerly await a release date for the upcoming season, the show's star Penn Badgley discussed YOU Season 2, and even revealed more about Joe's new love interest.

On the heels of Season 1, which ended with Joe Goldberg killing his romantic obsession Beck, Joe is headed to Hollywood and meets a new love interest while in la la land. Love Quinn (played by Victoria Pedretti from Haunting of Hill House), is "an aspiring chef ... tending to a deep grief — so when she meets Joe she senses a shared knowledge of profound loss," according to a tweet from Netflix.

However, Badgley gave even more insight about Joe's new crush in an interview with Entertainment Tonight. "I’m really excited for people to get to know Love," Badgley said. "She adds a dimension that hasn’t existed yet. There's a side to Joe that we haven't seen yet because her character, in some ways, is the polar opposite of Beck." Badgley continued:

"Joe was always trying to get Beck's attention, sort of almost against her own instincts and will, whereas Joe is trying to be better. And Love won't let him say 'no' to her, even though he's trying desperately. It's very different between Joe and Love than it was with Beck, and thank god, because you can't do that again. That would just be brutal. To me, that would be irresponsible if we did the same thing again."

While YOU seems to be shaking things up in the love department for Joe, there's something that probably won't change when Season 2 is released. During Season 1 of the series, which premiered on Lifetime before moving to Netflix, an unexpected corner of the Internet (a very large one, at that) declared their own love for Joe. Even when he stalked, murdered, and psychologically tormented women, people began to root for the antagonized antihero.

It was a trend the former Gossip Girl star said he wasn't here for. But he opened up about what the audience's attraction can say about society as a whole.

"I don't want to just say that it's problematic and that the viewers themselves have a problematic reaction. I think what's inspiring about it is that at a time when we're striving for the empowerment of women and for the equality of men and women, that we are also simultaneously able to be transfixed and charmed by a character like Joe. It speaks to how deeply ingrained a lot of these standards and norms are where we love to see a guy behaving like him. In a way, Joe is a great cultural touchpoint to say, 'We still have a lot of work to do.'"

Badgley even told ET that after Joe murdered Beck in Season 1, he was the most baffled at fans' ability to still root for him. "That always haunts me, thinking of Beck," Badgley explained. It's like, 'You really did that in the first season, and we're still going, and people really like this guy?' That's disturbing. In his mind, she's not even dead." But Badgley was quick to add that Joe's former love is in fact deceased. "I'm not giving you some kind of spoiler, she's dead," Badgley clarified. "In his mind, everyone's still alive because the pain that he feels he suffered at their hand is very much still alive."

When YOU Season 2 drops on Netflix...soon, hopefully, fans will see Joe and Love's relationship develop.