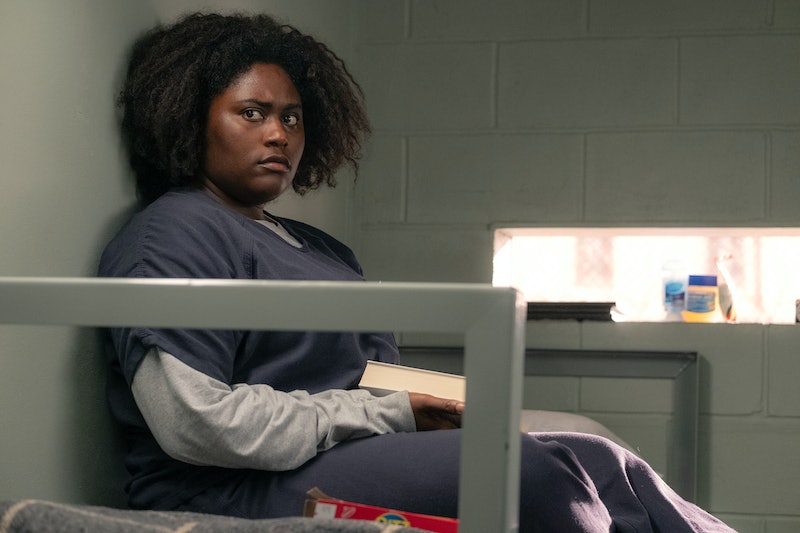 Spoilers ahead for Orange Is the New Black Season 7. For most of her time at Litchfield Penitentiary, Taystee has been the glue that holds everyone together. She's always been strong, responsible, and determined to beat the odds that life has dealt her, which is why the version of Taystee we see in Orange is the New Black Season 7 seems like a totally different character. Stuck in a maximum security facility following the Season 5 riots, she grapples with a life sentence she doesn't deserve. It puts her in a very dark headspace, and for much of the season, it seems as if she might never recover.

As one of the main organizers of the riots, Taystee witnessed the death of violently abusive C.O. Piscatella and, despite her innocence, was tried and found guilty of his murder. When Season 7 picks up, the reality of her conviction has set in, leading to intense suicidal ideation. She doesn't want to spend the rest of her life in prison, so she seeks out a way to end it.

The Innocence Project reports that between two and five percent of incarcerated people are innocent. If two million people are behind bars, two percent equals 40,000 wrongfully imprisoned people, which means Taystee's case is, sadly, representative of real life. According to the National Registry of Exonerations, there have been 2,468 exonerations in the U.S. since 1989, which add up to a total of 21,726 years of time served by innocent people.

According to the World Health Organization, inmates are already at high risk for suicide, and though Taystee has largely remained positive throughout her time in prison, her new sentence is too much for her to bear. Feeling as though she has nothing left to work toward, she decides to end her life. Before she does so, though, she's given a glimmer of hope: Suzanne comes forward and writes a witness testimony clearing Taystee for Piscatella's death. It's submitted to Taystee's lawyer as potential evidence and could call for a habeas corpus hearing. While she awaits an outcome, Taystee gets roped into tutoring Pennsatucky for the GED, and for a short time, she seems to be back to her old self. But she's let down once more when her lawyer decides Suzanne's account is not enough to change her case.

Feeling defeated, Taystee takes one final walk back to her cell and reflects on her life, only to be stopped by the sight of Pennsatucky laying lifeless on the laundry room floor. She runs to her and screams for help, but it's too late. Pennsatucky has died from an overdose.

Taystee is devastated by the loss of another friend, but instead of letting it push her further into a dark hole, she allows it to inspire her next steps. She abandons her plan to take her own life and instead finds ways to make the best of her sentence: teaching personal finance classes to the inmates and running her newly founded Poussey Washington Fund, which distributes micro-loans to ex-felons in order to help them get on their feet. She may never see her own release, but in helping her fellow inmates find success after prison, Taystee discovers the purpose she needs to keep going. Ultimately, she seems to return to the bright, driven, and joyful person fans have always known and loved, and though her journey is bittersweet, in the end, at least it's more sweet than bitter.