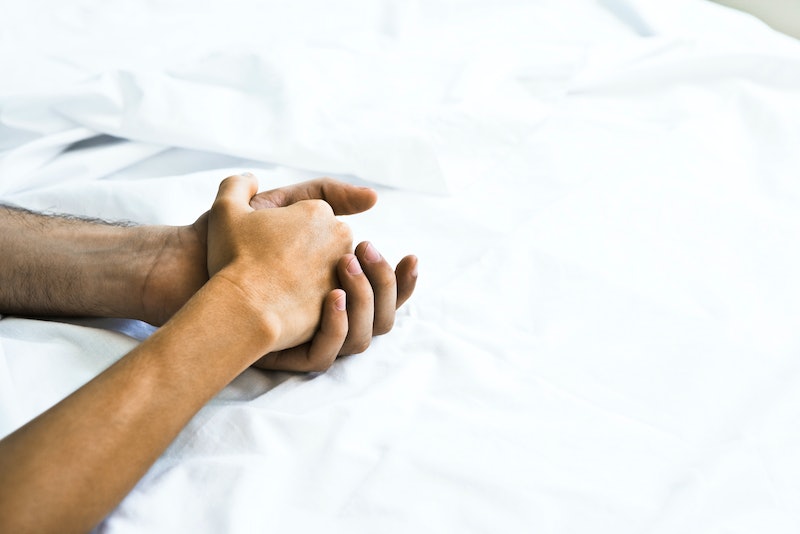 What happens to the body during orgasm is a lot more famous than what happens afterwards. Just because movies and TV only generally show that latter part doesn't mean that most of our fascination isn't focused on the former. That famous scene from When Harry Met Sally? Come on, people! After all, we as a culture are almost entirely focused on getting to that point, and less. But what happens to the body after you orgasm — and why — is it often confusing, strange, slightly weird, and frankly a bit emotionally vulnerable. We all know the stereotype that men roll over and want to fall asleep after sex, but do people with different genitals really experience post-coital bliss in such different ways?

Whatever an orgasm looks or feels like to you, post-orgasmic states are often dismissed as a haze of pleasure and intimacy. But if you look at the science, they're actually significantly more complicated, especially considering many orgasms don't involve penis-in-vagina sex. An orgasm is a major event for the body no matter its sex, involving huge coordination between the genitals, the organs, the hormones, and the brain; it stands to reason that the come-down, as it were, is also a very complex process. It may not be pretty — imagine the clean-up after a massive music festival — but it's crucial for understanding why, post-O, people may sometimes feel needy, angry, sullen, or even disoriented.

Here's the guide to what happens in your body once you're breathing heavily in a pile of sweaty sheets.

We're All Blissfully Relaxed, But In Different Ways

The mechanism of an orgasm for people with vulvas is actually a series of rapid, rhythmic contractions. And they're not just in the vagina: an orchestra of pulses go through your genitals, anus, uterus, and pelvic floor all at once, extremely rapidly. But it also makes the brain explode, flooding it with opioids from the limbic system, as a "reward" full of pleasure and happiness, satisfying the urge to orgasm created by dopamine.

According to a report from Salon, people with penises and vaginas manifest this happiness in different ways. (Though research often uses binary terms that conflate sex and gender, not everyone with a penis identifies as a man, and not everyone with a vagina identifies as a woman, and the system of hormones that governs these reactions isn't dependent on someone's gender identity.) People with penises, it turns out, do not just roll over and go to sleep, as 1950s cartoons would have it; they eat, smoke, ask for favors, or drink — in other words, they keep looking for another source of pleasure after the orgasm has ended. Their dopamine hit is over, but they want to recreate it in some other way. People with vaginas, the research suggested, like to communicate, touch bodies, and experience bonding with their intimate partner by staying in the same room. They're busy enjoying the after-fuzzies, not looking for another high.

Importantly, while people with penises like to communicate and increase intimacy too, their pull towards it may not be as strong. The reason for that appears to be to do with testosterone levels and how they impact bonding behavior — and we'll get to that in a second.

A key part of orgasm is a kind of tunnel vision — and it's not only blocking out the doorbell and construction noise outside. Orgasm is actually built on complete focus, and we become effectively unaware of any other stimulants, either physical or, it turns out, mental. And people with vaginas in particular become very focused indeed.

A 2005 study from the Netherlands showed that the parts of the brain regulating feelings, the amygdala and hippocampus, actually "turn off" in the build-up to orgasm. We become completely focused on sensation and pleasure, rather than registering love, worry, or anything else. The part of the brain regulating behavior turns off, too, so we're not controlling ourselves out of fear of judgement, either. Once we've come, we return to our bodies, our consciousness re-calibrates, and our emotional intelligence returns — which leads to our next point.

People With Vaginas Have A Greater Drive To Bond

The "cuddle chemical" oxytocin is a huge part of human bonding: birthing parents release it copiously while bonding with their newborns, for instance. So, unsurprisingly, people who've just had sex will find themselves awash with it. It's generally agreed among scientists that the pituitary gland releases it after orgasm for people of any sex.

An oxytocin hit leads to a corresponding feeling of trust, safety, and emotional openness. However, a 2013 study by the University of Connecticut theorized that warm, fuzzy oxytocin paradise isn't the post-orgasm experience for all of us. People with higher testosterone levels may not experience the oxytocin cuddles, because testosterone is antagonistic to oxytocin and might blunt its effects.

People With Penises Might Have More Trouble Feeling Pleasure

Immediately after an orgasm, Hochberger says, people with penises will likely want to retire. "Half of their erection is lost immediately, and they feel like this intense relaxation, they feel drowsiness, and then they go into this refractory period where they can't get an erection."

An interesting 2003 study on the side effects of the post-orgasmic state focused on longer-term consequences — and the results were a bit unusual. After a mind-blowing orgasm, it seems, the body's pleasure receptors, those that produce the chemical dopamine (which controls our pleasure and reward centers), get slightly tired out. The theory is currently that the body literally depletes itself after a serious orgasm, particularly in people with penises. It's called sexual exhaustion, and it seems to be all in the brain: the scientists, who were working with male rats, could make them feel revitalized and full of lust again by fiddling with their neurotransmitters. But if you don't feel like having sex again for several days after a particularly good orgasm, science isn't surprised: your brain chemistry seems to need to recover. And if your dopamine receptors aren't recovering well, you may actually become angry and angsty.

It's no mistake that orgasms are referred to as climaxes — they're the culmination, and hopefully release, of an intense series of built-up sensations in the body, particularly in the genitals. But for some people with vaginas, sometimes one's not enough. Basically, people with vaginas don't have a long "recovery period" after our first orgasm like people with penises do. We can, for all intents and purposes, keep going without a breath. And sexuality counselor Ian Kerner pointed out in Women's Health that one possible (and common) feeling after a first orgasm can be, well, dissatisfaction — because the body's tension hasn't been fully dissipated by multiple crackers. Our body gets grumpy and greedy — almost the same as if we hadn't orgasmed at all. The good news? Post-first orgasm, the next ones are easier and more rapid.

Just remember; when it comes to sex, the journey is just as important as the destination. Still, no matter who you're having your orgasms with, or if you're having them solo, it's interesting to know the science of what happens once the big O comes.

This article was originally published on Aug. 26, 2015