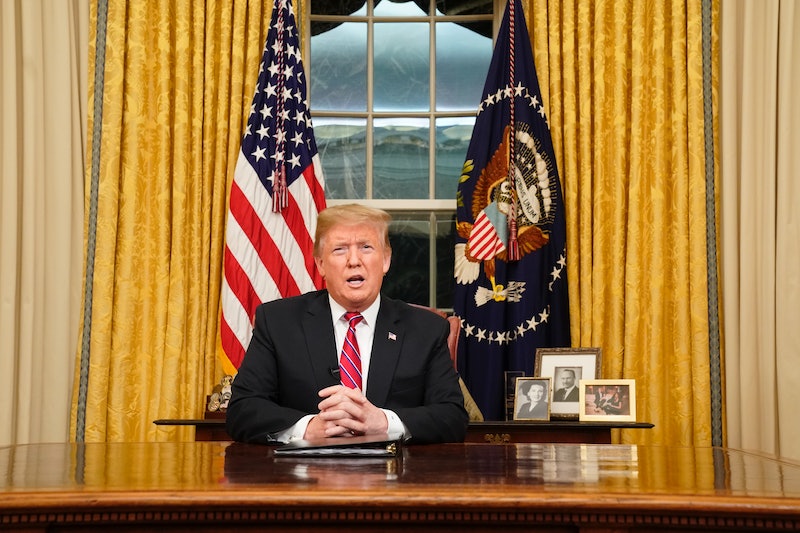 More than 50 senators have backed a Senate vote to reject President Trump's national emergency for his demand to build a border wall between America and Mexico. This means Trump will likely use his veto power for the first time since he became president, setting up a political battle between the executive and legislative branches.

As CNN noted on Thursday, such a Senate vote against a president's declaration is considered "a defeat," meaning that Trump will most probably have to use veto power. So, what happens now? According to The Constitution Daily, the resolution will now head toward Trump's desk. At that point, Trump will have to either sign the measure or leave it unsigned for 10 days, according to the website. The Constitution gives the president the power to veto this resolution and explain his rationale under Article 1, Section 7.

Because Trump's national emergency declaration is a complicated subject, it's worth checking out that specific clause The Constitution Daily mentioned in order to understand how exactly it works.

According to that clause, "Every order, resolution, or vote to which the concurrence of the Senate and House of representatives may be necessary (except on a question of Adjournment) shall be presented to the President of the United States; and before the same shall take effect, shall be approved by him, or being disapproved by him, shall be re-passed by two thirds of the Senate and House of representatives, according to the rules and limitations prescribed in the case of a bill."

With Thursday's development, Trump can either sign the measure or veto it. If he decides to veto it, which is most likely to occur, he has two kinds of veto power he can exercise as an American president, as The Constitution Daily reports. One type is a "direct veto," which takes place when the president rejects the resolution and returns it to Congress with an explanation. The other type of veto is a "pocket veto"; if Trump doesn't sign the resolution back during the 10 days he's given and Congress adjourns, the measure doesn't pass. For now, though, it's not known what direction Trump will take for the Senate resolution.

The Thursday Senate vote may not surprise some readers. In the past, a few Senate GOP members have been clear about their opposition to Trump's national emergency declaration.

In mid-February, one of those Republicans, Sen. Collins, said in a press statement, "Such a declaration would undermine the role of Congress and the appropriations process; it’s just not good policy." Collins added that "it also sets a bad precedent for future Presidents — both Democratic and Republican — who might seek to use this same maneuver to circumvent Congress to advance their policy goals."