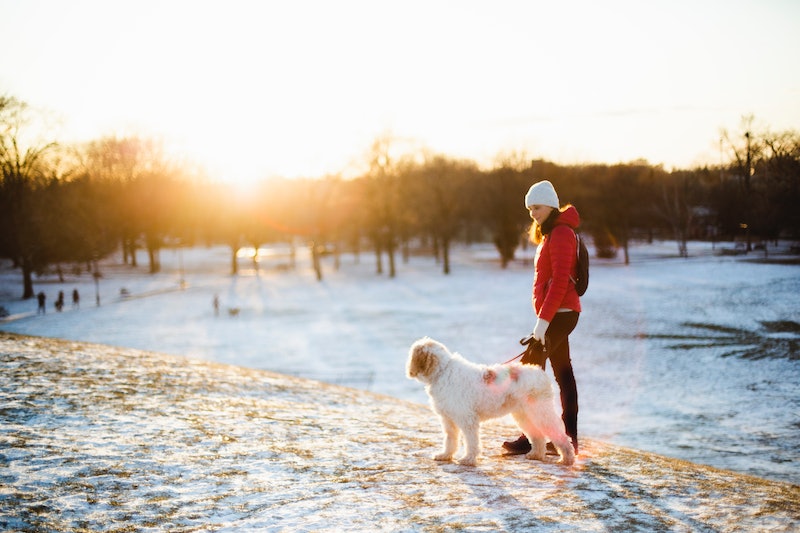 The winter solstice marks the shortest day and longest night of the year — and after that point, days gradually begin to get longer again. Winter solstices have great cultural significance in many places worldwide, and have been celebrated for thousands of years. After the winter solstice passes, your body may experience some interesting side effects: your sleep patterns might change as the hours of daylight begin to lengthen and spring arrives. Experts tell Bustle that both morning light and changing temperature can have tangible effects on our bodies as they adjust after the winter solstice.

The change isn't likely to be radical, according to Dr. Clifford Segil M.D., a neurologist at Providence Saint John's Health Center. "It is challenging to say winter sleep is better than summer sleep," he says. However, there are several ways in which sleep after the winter solstice can be different from sleep before, and one element can cause powerful changes: natural light.

Humans have an internal circadian rhythm — a kind of clock found in the brain — that regulates when we feel sleepy and when we wake up, but our rhythms can be affected by external cues like daylight. "Light is often a stimulus to awaken," Dr. Segil tells Bustle. Exposure to the light of dawn can prompt our internal circadian clock to shift and wake us up. A review of the science around circadian rhythms published in Somnologie in 2019 found that even short exposure to bright morning light can shift our circadian clock. Over time, the shifting daylight after the winter solstice may mean you awaken naturally at earlier and earlier times of day.

After the winter solstice, dawn gradually arrives earlier, though the degree of change depends on your longitude, or distance from the Equator. Dawn on the winter solstice in New York is at roughly 7:20 a.m., while on the summer solstice it's around 5:20 a.m., according to meteorological predictions. Further north, the difference is more significant; in Anchorage, Alaska, the sun rises on the winter solstice at around 10.20 a.m., while at the summer solstice it's 4:20 a.m. If you sleep in a room with natural light in the mornings, Dr. Segil says, your brain will recognize dawn light as a cue to get up — and that may affect your waking patterns throughout the year. However, many of us don't actually wake up with the dawn; we sleep in darkened rooms and use alarm clocks, in part to resist the effects of the changing seasons on our sleep schedule (since the rest of our day's schedule doesn't change during the year).

The other shift that may occur in sleeping patterns after the solstice, Dr. Segil says, has to do with temperature. "It is well documented that a colder sleep environment allows most people to fall asleep faster, and some people believe there is better restorative sleep during cold nights," he tells Bustle. Being cool when you sleep is important for more than just bodily comfort. As we fall asleep, our circadian rhythms prompt our core body temperature to fall and our skin temperature to rise, which helps us sleep deeply and remain comfortable. Disturbing that cooling process with a hot room means we won't sleep as well overnight.

This doesn't mean that sleep is universally worse for us when it gets warmer in the spring and summer. The human body has a variety of temperature changes during sleep, and research has shown that the 'right' temperature for sleep can be a complex thing. A study published in Frontiers in Neuroscience in 2019 found that the quality of non-REM sleep might depend on a combination of our natural temperature drop during sleep, and our tendency to snuggle in a warm environment, keeping our skin nice and cozy. However, it's worth remembering that the hotter nights of summer may affect your sleep quality negatively.

If you'd like to maintain a regular sleep schedule throughout the year, try regulating your bedroom temperature and waking light year-round, so you aren't at the mercy of the changing seasons. People who prefer waking with the sun and keeping their windows open year-round might find that their sleep and waking both change significantly after the winter solstice.