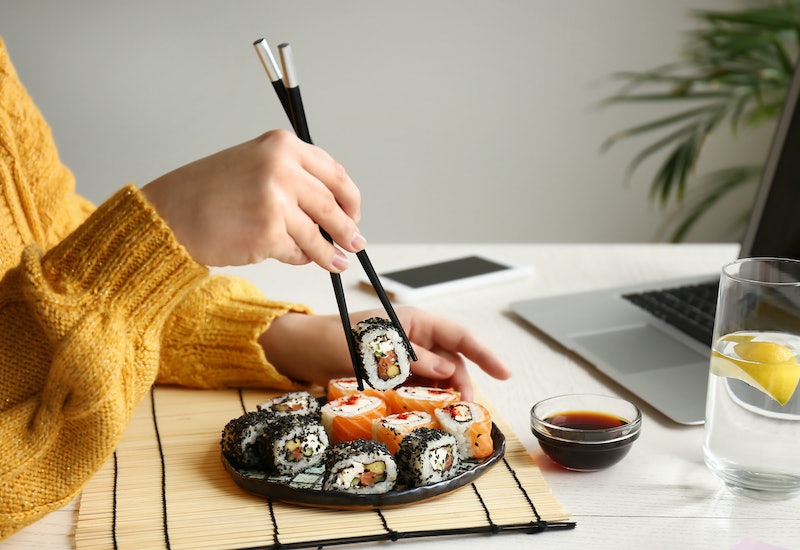 If you're used to eating burgers for dinner, or having chicken at lunch, a lot will change when you go pescatarian. But more importantly than getting used to reaching for different foods are the changes that can happen in your body. You might not wake up the very next day a glowing beacon of pescatarian life, but experts say you are likely to feel different in the long-term.

Of course, "a pescatarian is someone who avoids all animal flesh, other than seafood," Susan Bowerman, MS, RR., CSSD., CSOWM., FAND, Sr., a registered dietician, tells Bustle. "They would not eat meat or poultry, but obtain their protein from seafood and, for most, also dairy products and eggs, as well as plant-based proteins (such as beans, lentils, soy, etc.)."

It's not necessarily the biggest dietary change, but it's one that can certainly make a difference, Bowerman says, including having an impact on the environment. In general, fewer resources are used to produce seafood compared to meat, she says, which could prompt someone to make the switch. But there's also the long list of health benefits. Since it's rich in omega-3 fatty acids, Bowerman says, seafood is considered to be one of the healthiest animal proteins. And it's these fatty acids that can lead to a noticeable difference in overall health.

"The increase of omega-3 fatty acids from the seafood can, over time, reduce a person’s risk for heart disease, lower blood pressure and cholesterol levels, reduce the risk for colorectal cancer (particularly if they are replacing red meat with seafood), slow the rate of mental decline, and improve mood," Bowerman says. It's quite a list, but it's one that's backed by many a scientific study, which have pointed to the benefits of eating fish versus red meat.

For folks with anxiety and depression, it's interesting to note that research has indicated a diet rich in omega-3 fatty acids may have the potential to improve mood and energy levels, Lisa Richards, a certified nutritionist, tells Bustle. Not to mention, red meats tend to be inflammatory, she says, which can lead to mood issues. "Therefore, by making the switch to fish only," Richards says, "you should see mental benefits as well."

A pescatarian diet may also eventually help ease joint pain. As Richards says, "The American diet is typically low in anti-inflammatory omega-3s and high in inflammatory omega-6s. This causes chronic inflammation in the body leading to a host of health conditions both acute and chronic. Eating fish on a regular basis can reduce this imbalance and as a result the inflammation that occurs."

When eating more of these foods, and opting for them instead of red meat, it's also possible to notice an improvement in the appearance of skin breakouts and rashes, Bowerman says. And this is, again, due to the anti-inflammatory properties of those omega-3s.

All of that said, any new pescatarian looking to get these benefits from seafood will want to aim for two servings of fatty fish per week, according to the American Heart Association, which includes the likes of salmon, mackerel, herring, lake trout, sardines, and albacore tuna.

For anyone looking to reduce red meat, it's important to take it easy. "Switching to a pescatarian diet may be more difficult for those who consume a lot of red meat and poultry," Kristen Carli, RD, a registered dietitian nutritionist and owner of Camelback Nutrition and Wellness, tells Bustle, so it may be an ongoing process. It can, however, help to remember that pretty much every food group remains in a pescatarian diet, Carli says, including whole grains, fruits, vegetables, dairy products, eggs, etc.

Making any change like this one is ultimately all about figuring out what feels best. "When switching to a pescatarian diet, aim to not only eat fish as a source of protein, but plant-based sources of protein like beans, lentils, nuts, and seeds to consume a varied diet," Carli says. And it should result in covering all the nutrition bases.

Pescatarians should also try to avoid eating large amounts of seafood that's known for carrying high levels of mercury, Richards says, as that can have a negative impact on health. These typically include the big fish, she says, like swordfish, Mahi Mahi, and marlin. And this is especially true for those who are pregnant.

Changing what you eat will always result in an adjustment period, but experts say adding more seafood — while reducing the amount of red meat and poultry eaten — can certainly lead to health benefits over time.