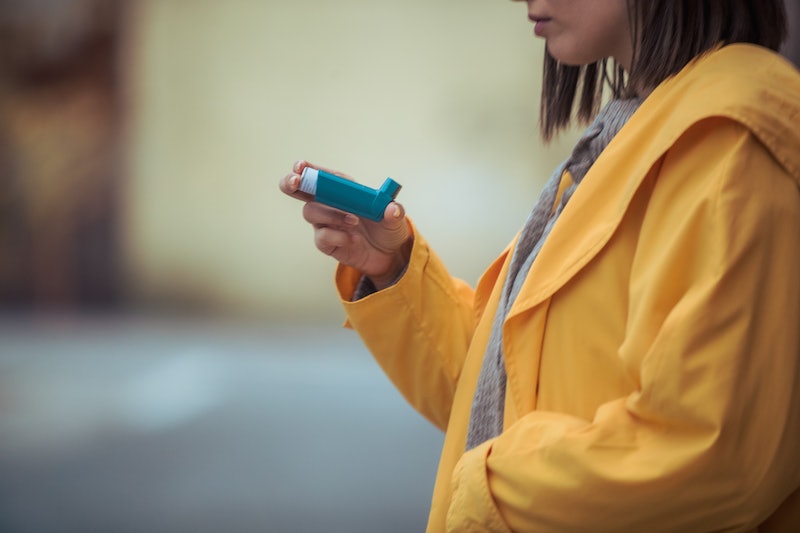 One in 13 people in America have asthma, according to the Asthma and Allergy Foundation of America, which is a little less than 8% of adults. You might associate asthma with difficulty breathing, but asthma's effects on the body can be far-ranging.

"It's a disease that doesn't discriminate," Dr. Juanita Mora, M.D., an allergist and national spokesperson for the American Lung Association, tells Bustle. "I have heard patients describe asthma as a disease that has taken control of their bodies and their lives."

Asthma primarily affects your lungs, Dr. Omid Mehdizadeh M.D., an otolaryngologist and laryngologist at Providence Saint John's Health Center, tells Bustle. It's a long-term condition that makes your lungs swell and airways narrow, making it difficult to breathe. Inflammation is normally your body's response to threats, but for people with asthma, the lungs become over-sensitive to perceived threats, like allergens or smoke. The response — narrowed airways and inflammation — ultimately hurts your ability to breathe.

Dr. Mehdizadeh says that asthma triggers can include all kinds of allergens (like pollen, mold, or dust mites), exercise, cold weather, smoking, vaping, and infections. Particle pollution, smog, smoke, and pet dander can also make asthma worse, according to the Centers for Disease Control & Prevention (CDC). "Some individuals with asthma may also develop symptoms when taking aspirin," he says.

Asthma attacks are the most well-known symptom of asthma, but they're not the only way it shows up. "Asthma causes periods of wheezing, chest tightness, shortness of breath, and coughing," Dr. Mora says. People with asthma can also cough up more phlegm than usual, according to Asthma UK, because their lungs are inflamed and trying to fight off infection.

It's only when symptoms get very severe that they're classified as an attack — and when a person has an asthma attack, their body really goes through it. The lungs get so inflamed they struggle to bring in enough oxygen, and the person might wheeze, cough, and struggle to breathe. "Asthma attacks can produce signs of decreased oxygen levels in the blood, as a result of an attack, can look like rapid or shallow breathing, pale skin, or bluish discoloration of the lips or fingernails," Dr. Mehdizadeh says. An attack can even wake you from your sleep.

Over the long term, asthma can physically reshape your lungs, as years of inflammation build up. It's a process called airway remodeling, and according to a study published in 2017 in Cell & Tissue Research, it can either lead to normal airways as the lungs grow and recover from inflammation, or permanent alteration in lung structure.

Asthma affects other parts of the body, too. Some people with asthma, Dr. Mehdizadeh says, get nasal polyps: little growths inside your nasal passage that are benign, but can cause restricted airway flow and make you lose your sense of taste and smell. They're more likely in people with asthma because they're associated with inflammation of nasal and lung tissue. Unhelpfully, people with both nasal polyps and asthma are often allergic to aspirin, according to Harvard Health, and will have breathing difficulties if they take it.

Asthma attacks can cause a feeling called "air hunger," where a person struggles hard for oxygen and can feel like they're dying. People also get this feeling from panic attacks, and asthma can even be triggered by the rapid breathing in a panic attack.

Dr. Mora says there's still a lot to discover about how asthma affects the body, from the role of genetics to the long-term impact of asthma on the immune system. In the short term, though, if you're feeling short of breath a lot of the time, it's a good idea to see a medical professional to test your lung capacity and inflammation; if you have asthma, a good inhaler and treatment will help a lot. People with more severe asthma are also at higher risk of developing complications from coronavirus, so now is a good time to work out an action plan with your doctor.