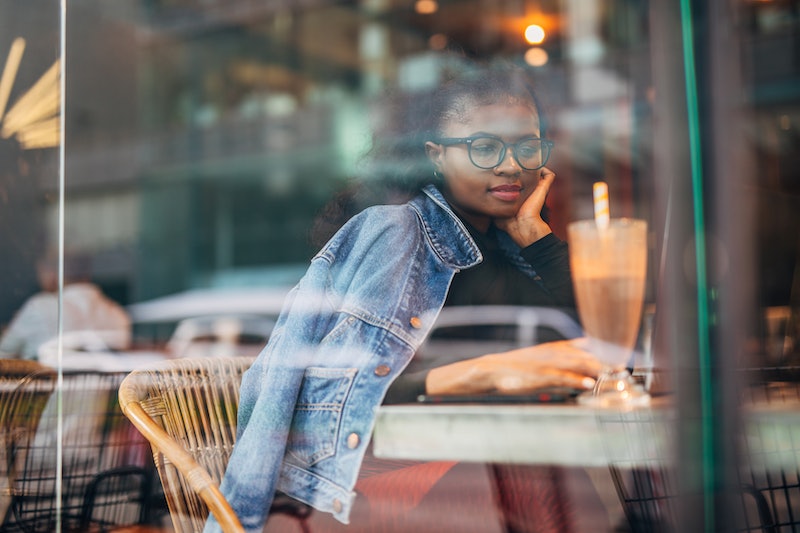 If you've been vegetarian for ages but are hearing the siren song of meat once again, you may be worried that you'll encounter digestive woes when you take your first bite. Cramps, undignified journeys to the bathroom, a very confused colon, the works. The reality is a bit different. While the body definitely adjusts to a vegetarian diet over time, experts tell Bustle that eating meat after being a vegetarian won't necessarily cause a lot of discomfort — and if it does, it's temporary.

It's worth noting that scientists don't believe that humans lose the ability to digest meat over time simply because they stop eating it, but starting out with a huge plate of Swedish meatballs might be a slight shock to the system. "If you don’t produce enough stomach acid or digestive enzymes to break down the proteins in meat, it could cause some bloating and constipation," Stephanie Papadakis, N.C., nutritional consultant and founder of Gut Of Integrity, tells Bustle. Meat has one advantage over vegetables, and that's that it will release a steady flow of energy throughout the day. "Grains and legumes are higher in carbohydrates and can cause your blood sugar to surge," Papadakis says. "You’ll see less blood sugar spikes when introducing meat because it is lower on the glycemic index."

The long-term effects of eating meat don't necessarily show up if you have a bagel with lox after being vegan for 15 years. A small amount of meat won't automatically change your risk for developing diseases, gastroenterologist Dr. Will Bulsiewicz, M.D., author of Fiber Fueled, tells Bustle. "Most of the concerns that exist related to long-term meat consumption are, well, long term. Conditions like heart disease take decades to develop, and while meat can be a contributing factor, you won't necessarily feel any different," he says.

One area which may change pretty rapidly, however, is your gut microbiome. Bulsiewicz tells Bustle that according to a 2014 study published in Nature, our gut composition can change within 24 hours of altering our diet. "Meat consumption, high in animal fat, is known to increase the growth of microbes that tolerate bile, because bile is secreted from the liver to help us absorb the extra fat content," he says. A single meat-heavy meal can encourage bile-tolerant microorganisms like Bilophila wadsworthia to grow, which may not be good news for the gut.

Eating meat after years of vegetarian meals may also affect some other aspects of your health. Bulsiewicz tells Bustle that when we eat meat and other animal products, our bodies produce an organic compound called TMAO, which is heavily associated with heart and vascular disease. "TMAO is produced by our gut microbes when they are exposed to carnitine from red meat or choline from meat, egg yolk or high-fat dairy." Interestingly, scientists in a 2013 study published in Nature Medicine gave a ribeye steak to a long-term vegan and found that they didn't produce any TMAO at all — but omnivorous people on the study who ate steak saw their TMAO count increase by 600%. Eating meat regularly after being on a plant-based diet might change your TMAO count over time.

Over the longer term, Papadakis says, re-introducing meat into your diet may change other aspects of your health, including your skin and your energy levels. Zinc is linked to curing acne, so if your plant-based diet has been deficient in zinc and you start eating zinc-heavy meats like grass-fed beef or lamb, you may see improvements in your skin, she says. Your energy levels may also rise if you haven't been getting enough vitamins or minerals — like B12, A, D, iron, and omega-3s — in your plant-based days. "It's possible you will feel really energized once you start eating meat again," she says.

If you do want to make the change to meat-eating, experts tell Bustle, go for it in moderation and be aware of how it may change your health. "Proper nutrition is about balance," Bulsiewicz says; he advises focusing on whole foods and plant-based meals, and eating meat sparingly because you enjoy it. Papadakis recommends sticking to one ounce of meat or less at a time, and taking some digestive enzymes to help your stomach deal with its momentary confusion.