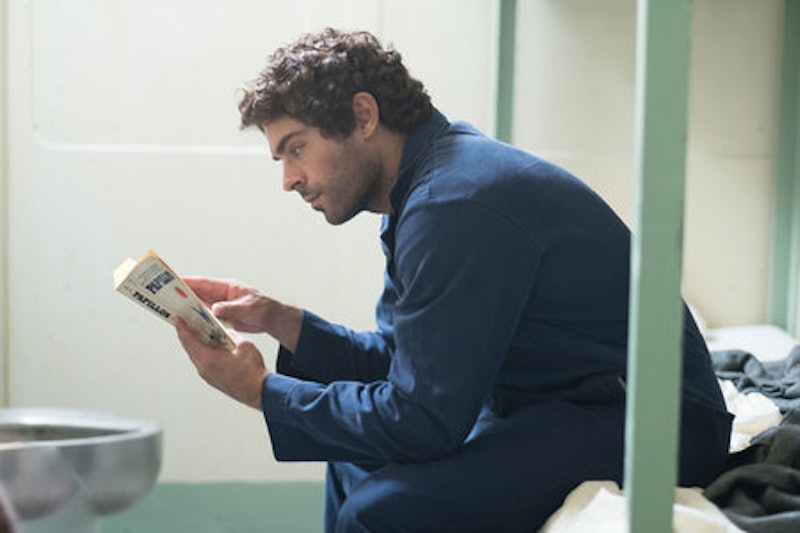 True crime is big business these days, thanks to the popularity of Serial, Making a Murderer, and My Favorite Murder. But what happens to your brain when you read true crime? Bustle reached out to three experts to find out exactly how consuming true-crime entertainment can affect you, and their answers were pretty eye-opening.

True crime is not a new genre of entertainment. It became highly popular in the 1970s and '80s, when serial killers were making headlines each week, and Ann Rule published her famous tell-all on former co-worker Ted Bundy, The Stranger Beside Me.

"I think that the true-crime genre has had an incredible explosion in the past five or six years," Illinois Wesleyan University Professor Amanda Vicary tells Bustle over the phone. "It used to be, if you wanted to read something about true crime, you would have a magazine, back in the day, of crime stories. Then we had true-crime books. Now we have podcasts. Now we have television shows. Now we have television stations devoted to true crime. And it tells us that there’s something about this that is really appealing to a lot of people."

True crime's immediate effect on the brain has a lot in common with that of other frightening or intense media. Urban Balance's Dr. Aimee Daramus tells Bustle that the "cocktail" of brain chemicals produced by watching a true-crime documentary are very similar to those produced while watching a horror movie.

"It’s like a particular cocktail of chemicals: I’m scared and it’s fun."

"Adrenaline is a stimulant, so you get that kind of excited, energetic feeling," Daramus says. "When there’s an actual, real-life emergency, it’s what makes you stronger and faster. But just sitting there watching a movie, it’s what helps you get excited about the movie." She explains that your brain can produce endorphins, which act as "mild opiates." "So like any painkiller, they are a little bit addictive." Your brain also produces dopamine and serotonin, which Daramus says creates a wicked combination. "Those [feel-good chemicals] get mixed in with the chemicals that usually happen when you’re scared. It’s like a particular cocktail of chemicals: I’m scared and it’s fun."

So You Identify With A Serial Killer?

True crime's appeal goes far beyond neurotransmitters, however. The experts Bustle spoke with all agreed that the true-crime genre has something to tell us about ourselves as individuals, in addition to providing valuable insight into the minds of cold-blooded killers.

"I think that why we enjoy true crime is related to why we enjoy fiction in general," says York University Professor Raymond A. Mar, "and that’s because fiction is really about other people and their relationships." In a way, it can be considered a matter of vicarious psychology in that a majority of people will never know what it's like to commit a murder or a heinous crime, so by reading it, "it’s sort of intrinsically fascinating to us, because we’re fascinated at other people," Mar says.

Daramus takes it one step further, theorizing that true crime allows audiences to identify with the major players in the drama. "We might imagine ourselves as the hero," she says, "or as somebody who can solve the problem. It’s fun to imagine ourselves succeeding, like somebody attacks us and we’re actually able do something about it."

As it Daramus notes, however, empathizing can go beyond the protagonist in the story and straight to the villain. "Read about the famous serial killers, the famous cult leaders, people like that — There are going to be parts of their childhood, parts of their past, that we can really relate to and feel for," Daramus says. "There’s also the sense of, 'Oh, that could so easily have been me, if circumstances were just a little bit different.'"

This identification with the killers and victims in true-crime narratives plays out differently on the basis of gender. It isn't just your imagination — the appeal of true crime is stronger for women. In 2010, Vicary and R. Chris Fraley published a study, "Captured by True Crime: Why Are Women Drawn to Tales of Rape, Murder, and Serial Killers?," which uncovered not only why women were more likely than men to choose true-crime entertainment, but also why the genre appeals so much to us.

For women, true crime may very well "act as a sort of dress rehearsal."

Vicary asserts that the most appealing elements of true crime — "learning how to escape from a kidnapper, or learning the signs to watch for in someone" — all have something to do with survival, with being able to avoid becoming a statistic. For women, true crime may very well "act as a sort of dress rehearsal," as Daramus puts it, because it allows readers and viewers to identify tactics they might use if they were to ever become the victims of a violent crime. That aspect may very well make true crime dangerous to some people, however.

"We can feel prepared, but that doesn’t make us prepared," Daramus tells Bustle. "So if we’re learning things from true crime that are a little bit sensationalized, and are not actually great things to do in a real crime situation, then we might actually have some false ideas about what we should do in that emergency."

True crime can also skew audience perspectives on crime statistics and the U.S. court system, according to Mar. "People who watch quite a lot of primetime television tend to make pretty systematic misjudgments about the real world," he says. "So they believe that there’s more police officers than there truly are, for example, there’s also more criminals, and these criminals are more likely to be caught, the good guys are more likely to prevail. But they also believe that they themselves are more likely to be the victim of a violent crime than is actually the case."

"You start to believe everyone is a predator and everything is dangerous."

Thankfully, Mar says that these "effects tend to be relatively small, and they tend to be associated with very high levels of exposure. People who watch a lot of primetime TV are often watching 30, 40 hours per week. So that’s a lot of exposure producing some relatively small effects when it comes to judgments of police prevalence or the prevalence of violent crime."

Vicary points out a few other issues that may arise if someone has a negative reaction to true crime. "Potential problems could come if, after being exposed to so many stories of people being killed, that you start to believe everyone is a predator and everything is dangerous," she says. "Does it get to the point where we aren’t friendly to the person in the grocery store anymore, because we’re afraid of them? Is it to the point that we’re afraid to leave our house because we’re worried we’re going to be kidnapped? I think that’s where the danger comes — when people start to take their paranoia and their fear too far."

How To Course Correct

So what should you do if you believe true crime has had a negative effect on your life? The experts Bustle spoke with recommended taking some time away from true crime if you're not feeling like yourself anymore.

Daramus emphasizes the importance of self-assessment and adulterating your true-crime habit with other forms of entertainment. "Make sure that you’ve balanced it with kind of normal social activities, other, less dire stuff to read," she says. "You absolutely have to be self-aware. ... True crime itself might not be harming you, but it might be good to watch something else before you try to sleep, or make sure you have other social activities, other reading, other stuff to watch."

Mar agrees. "Mixing it up is probably a good idea," he tells Bustle. "Watch some romantic comedies. Remind yourself that there’s humor and love and other things in the world as well."

Vicary advocates for a logical, information-based approach. "Probably the quickest, easiest thing to do is to remind yourself — look up statistics online — how rare it is that someone would ever be kidnapped by a stranger or killed by a serial killer," she says. "The odds of these things happening are extremely slim. We think it’s more likely, because we’re exposed to it all the time. If someone is kidnapped while they’re jogging on the street, and killed, that makes the front of the news. But when you think about how many millions of people there are in the United States, there’s a lot of people that are out jogging that aren’t getting killed on a regular basis."

In short, your true-crime habit probably isn't hurting you, and you don't need to worry that you're an odd duck for enjoying tales of murder and the macabre. But if you do feel like the world's become a bit more nightmarish since you started filling your nightstand with true-crime books, make sure to take some time for yourself before you start reading the next item on your TBR.