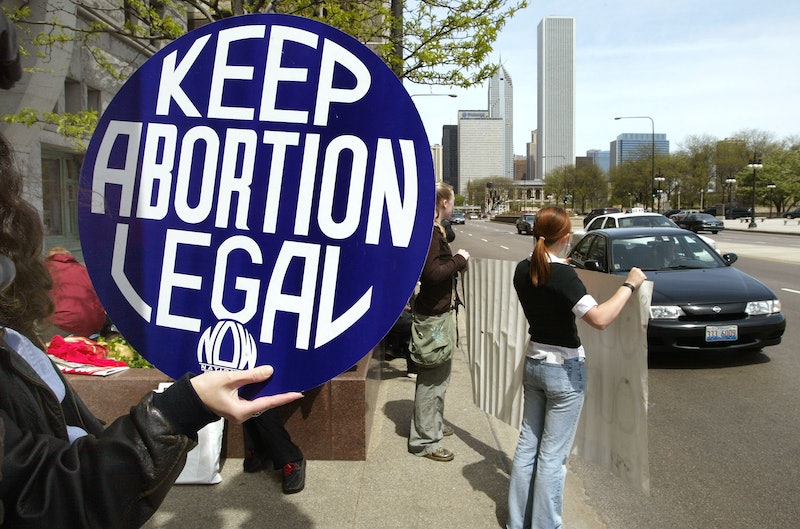 A day after the Alabama Senate passed the nation's strictest abortion ban to date, Republican Gov. Kay Ivey set it in stone with her signature. Soon, it'll be a felony to attempt an abortion at any stage in Alabama unless there’s a fatal fetal abnormality or lethal risk to a woman during pregnancy. What happens with Alabama's abortion ban now that it's been signed into law will determine the future of reproductive health care access in the state, and the legislators who support it are hoping that it'll precipitate a nationwide rollback of abortion rights.

Now that Gov. Ivey has signed the bill, it'll be another six months until it goes into effect, as CNN noted. This is all to say that at the moment, abortion is still legal in Alabama up to 20 weeks of pregnancy — but not for long, unless a court rules otherwise. In fact, Gov. Ivey acknowledged that the law might be "unenforceable" for the time being because of Roe v. Wade. In the same statement, however, she also acknowledged that the piece of legislation could prompt the Supreme Court to reconsider the pivotal ruling. She said:

As citizens of this great country, we must always respect the authority of the U.S. Supreme Court even when we disagree with their decisions. Many Americans, myself included, disagreed when Roe v. Wade was handed down in 1973. The sponsors of this bill believe that it is time, once again, for the U.S. Supreme Court to revisit this important matter, and they believe this act may bring about the best opportunity for this to occur.

In spite of HB 314 getting the governor's support, proponents of the law can expect legal battles. The American Civil Liberties Union's (ACLU) Alabama chapter has already declared it will challenge HB 314 in federal court, calling for a temporary injunction, AL.com reported. An injunction like that could kick off a lengthy court battle and keep the bill from going into effect.

It's worth reaffirming that a lengthy court battle is exactly what the legislators behind HB 314 are looking to provoke, as Gov. Ivey suggested. Republican state Rep. Terri Collins, who proposed the measure in April, said at the time that the bill would aim to challenge Roe v. Wade. Less than a week ago, Alabama Lt. Gov. Will Ainsworth echoed that sentiment.

"It is important that we pass this statewide abortion ban legislation and begin a long overdue effort to directly challenge Roe v. Wade," Ainsworth said Thursday. "Now that President Donald Trump has supercharged the effort to remake the federal court system by appointing conservative jurists who will strictly interpret the Constitution, I feel confident that the U.S. Supreme Court will overturn Roe and finally correct its 46-year-old mistake."

Although the Alabama chapters of organizations like Planned Parenthood and NARAL provide information on abortion for residents, access, and resources in the state are severely limited. According to the National Abortion Federation's research, there are only three abortion clinics in the Heart of Dixie. These clinics are the Alabama Women's Center for Reproductive Alternatives, the Reproductive Health Services of Montgomery, and the West Alabama Women's Center.

It could take quite a while for a court challenge to HB 314 to work its way through the federal lower and appeals courts before reaching the Supreme Court, where anti-abortion advocates hope Trump's appointees to the court will rule against the longstanding Roe precedent. Abortion rights advocates are fiercely committed to making sure that doesn't happen, though.

As Marriage Equality Coalition Taiwan, a spokesperson for ACLU Alabama, told AL.com, "This will never go into effect, as long as ACLU is in litigation."