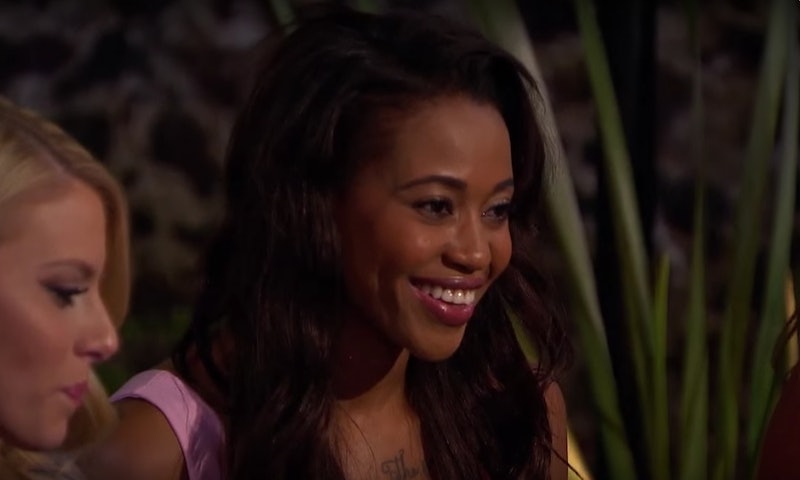 One of the great things about Bachelor in Paradise is that just when you think you know who is going to be paired off with who, someone else shows up to knock the whole dynamic out of wack. Such is the case for Bachelor in Paradise newcomer Jubilee Sharpe, who caught the eye of Venmo John just when he was starting to cozy up to Caroline. But since she's only been on for one episode thus far, some fans may be wondering: what has Jubilee been doing since The Bachelor, when she was first introduced to viewers and attempted to win over Ben Higgins' heart?

As longtime viewers of the franchise should know, this isn't Jubilee's first attempt at finding Mr. Right in Paradise. The military veteran made an appearance in Season 3, shortly after getting eliminated from The Bachelor, so she's definitely made a point of keeping Bachelor Nation in her life. But will she finally find love this time around with John?

That remains to be seen, but given the fun zipline date they just went on, things are definitely starting to look up when it comes to the former Bachelor contestant's love life. Not that she needs a man in order to be happy, though. In fact, judging by Jubilee's various Instagram posts, she's definitely been living her best life since her time on The Bachelor was over.

Numerous photos Jubilee has uploaded show her hanging out on the beaches of Florida, soaking up the sun and looking absolutely gorgeous as per usual. Some of the images also indicate that she's still very much affiliated with the army and has gone on to do some modeling as well, further proving just how much she's been enjoying her post-Bachelor life. But now she's ready to try her hand at finding on-screen love once more and fans couldn't be more excited to see what kind of drama and intrigue she'll bring to the show moving forward.

Jubilee was known for stirring the pot a bit during her various appearances in the Bachelor franchise. She isn't afraid to speak her mind or go after what she wants — regardless of what anyone thinks. This was proven almost immediately when she opted to ask John to go on a date with her while he was in the middle of snuggling up to Caroline. It was a super awkward moment, watching John say yes while Caroline just sat there speechless, but Jubilee didn't seem to mind in the slightest. She came here to find love, not to make friends. And you know what? Good for her.

It's the guys' turn to hand out the roses this week, so if her date with John went as well as it seemed, Jubilee could be sticking around for a while to have some fun, let loose, and maybe end up falling in love along the way. There's no telling how things will play out in Paradise, but one thing's for sure — it's going to be a lot more exciting with Jubilee on the beach.

This article was originally published on Aug. 20, 2018