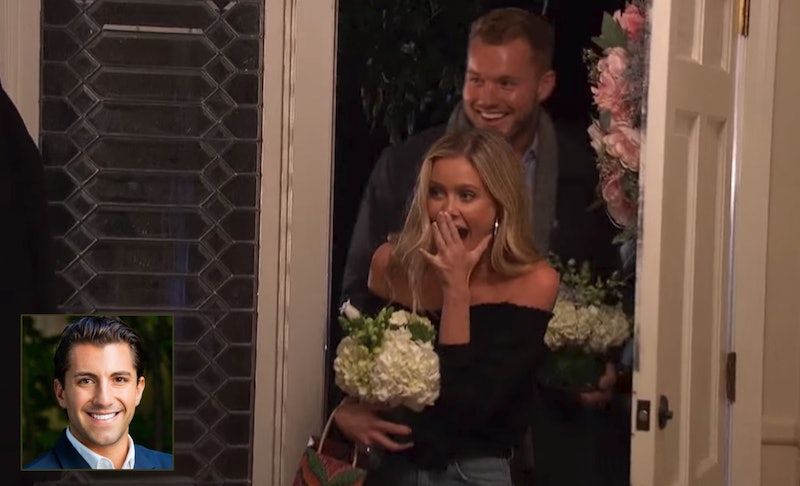 While competing on Becca Kufrin's Bachelorette season, Jason Tartick experienced love and heartbreak on national television. Now that he's been through it all, he has plenty of words of wisdom for new contestants, and he's dishing all to Bustle. Read what Jason has to say about what it's really like to take the Bachelor or Bachelorette home for hometown dates in this week's recap.

Hometown dates are always an entertaining episode filled with difficult conversations, tears, and polarizing opinions. It’s an episode that’s so relatable because we’ve all been there before, right? But while you may have brought a significant other home to meet your family, bringing the Bachelor or Bachelorette home with a camera crew is a whole different experience. Watching Colton's hometowns brought back vivid memories of my own hometown date with Becca. Here's what it's really like to be a cast member bringing the lead to your hometown to meet your family.

As unrealistic as you may find it to be, I want you to imagine leaving your friends, family, job, and home to embark on a journey to find love. A journey where you move into a mansion with 30 strangers competing for one person's heart. I can imagine your initial reaction, which was probably similar to mine: "Don’t get your hopes up, kid." Now picture a journey where week after week your feelings develop so drastically for this individual that before you know it, you receive a rose and are going to hometowns.

So by week seven, 26 cast members have been sent home, there are four family introductions left, and only three weeks left until a potential engagement with one person who you are falling in love with. Full transparency: I understand it sounds crazy. During this venture, you don’t have outside communication with friends or family, your phone, the internet, TV, your job, or even music. Essentially all of your day-to-day life distractions are removed. The result of this is magnified connection with your emotions, your peers, and your relationship. It creates an environment that allows for more in-the-moment discussions, life reflections, romance, and drama... lots of drama!

I am usually asked if I had a say on what the date was during hometown weekend. The answer was yes. There was so much time and effort dedicated by production to make these hometowns meaningful. The other other obvious issue is how much proactive planning is involved in this day. God bless the production team, as they have to proactively plan the dates for usually the top six or seven cast members without knowing who the lead will select for hometowns. Thankfully in Buffalo, we enjoy the simple things in life: hockey, beer, wings, family, and friends! (Speaking of which: not many people know, but I chipped my tooth at the chicken wing eating contest and talked out of the side of my mouth the rest of the night.)

The afternoon date is a time for the roles to be reversed. I was able to demonstrate my ability to lead a date for the first time, and this reversal in roles was thrilling for me. For others, it could be a burden. My thought was to have fun doing what we do best... playing hockey, eating chicken wings, and visiting Buffalo's best spots. As a viewer, pay attention to those who can lead a well-orchestrated hometown: They may just be your next lead if they don't end up earning the love of the Bachelor.

The anticipation of the evening date is overwhelming. It's the first time that you have seen or spoken to your family in seven weeks. There aren’t any second takes; it's truly an organic moment. Consistent with that first moment, the family goodbye is just as difficult since you will leave that house not knowing if you will come back as a couple or heartbroken.

For me, hometowns were a time of self-reflection and understanding what was important in my life and in my relationships. There was a point during week three when I actually broke down because of the realization that for so many years, I had built up walls to avoid facing insecurities. Rather than addressing those concerns, I ran from them. After three weeks of being so in tune with my emotions, it all hit me, and while it hurt, it was the best thing that ever happened to me. For these reasons, I am so grateful for what my time on the show did for my personal growth.

Spoiler: I speak to my mom and dad every single day on the phone. Thus, being on The Bachelorette was the longest I had gone without speaking to my parents since the days I literally learned how to speak. All of that said, it’s likely crystal clear that heading into hometowns, everyone involved is going through an emotional overload. My parents were worried about what I was going through and about being on television for the first time; I was nervous about how the city of Buffalo would be showcased and if I could do the city justice through this unique lens. My brothers, meanwhile, were just baffled as to how I made it this far!

The experience of watching hometowns week is even more intense when you've lived through it: The reactions of the families are so raw and so real. One of the most challenging conversations I had with my family was explaining to them how I genuinely fell in love on a journey they felt was unrealistic. Caelynn, Hannah G, Tayshia, and Cassie should feel content knowing that their hometowns were shown in a positive light filled with families who love and support them. For that, we are all grateful.