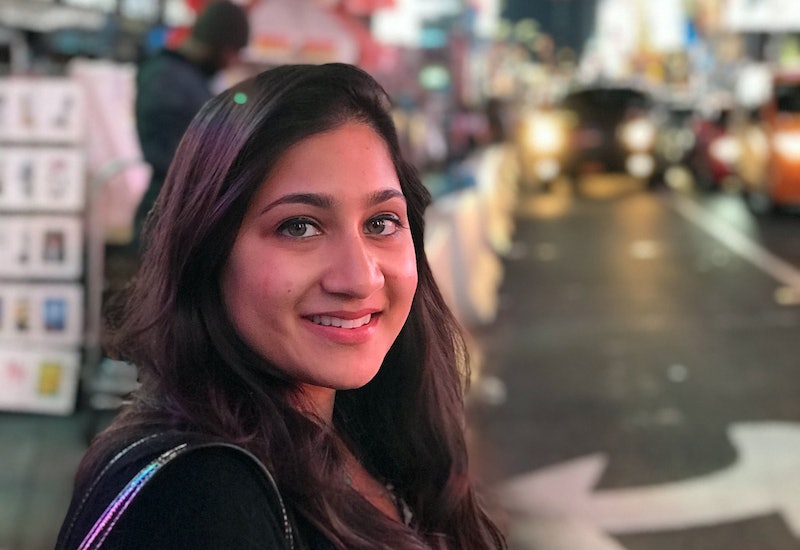 In this op-ed, Manal Moazzam, an editor for MuslimGirl.com, the world’s leading platform for Muslim women voices, explains what she learned when she tried to see herself as a "good" immigrant.

On all the government paperwork I had to fill out after I made the decision to immigrate to the United States, I was referred to as an “alien.” I hated the exclusionary term so intensely. It “otherized” me, and the repetition of the word served as a reminder that, despite being in the United States physically, I was still on the outside of an “authentic” American experience, looking in.

My husband, who’s from California, was working in the same Middle Eastern country as me when we got married. As a U.S. citizen, it was far simpler for him to return to his homeland than it was for him to bring his wife, too. In 2016, after a grueling and expensive vetting process, I landed in San Francisco, elated to be reunited with him after a lengthy time apart. But the utter dread of not being seen as a “good immigrant” continued to follow me as I threw myself into learning the ins and outs of my new home. Fear that people would think I didn’t belong here because of my “Muslim-ness” and my “brown-ness” incapacitated me.

This fear — that the elements of myself that make me stand out would expose me as “too different” or too “alien” to belong in the United States — made me take up less space and dodge certain situations where my cultural and religious differences might stand out. My mind was always a tsunami of calculations to determine how to avoid making anyone around me uncomfortable. I figured this determination to be a “good” immigrant might help appease those residents of this country who constantly lament a loss of so-called “American” culture to immigration.

Even now, I worry about how people might react when I have to perform my religion’s obligatory prayers in public five times a day. I feel like the “good” immigrant label evades me during the required annual 30-day period where I fast from sunrise to sunset. When I choose to wear a burqini-style swimming suit that is more akin to active wear than a traditional swimsuit, I feel self-conscious and vulnerable, as though I am featured on a billboard as a resister of American norms.

I worry about nights out with my husband’s colleagues, because I’ll have to explain that my husband, who is also Muslim, and I opt not to drink alcohol for religious reasons, while they knock back celebratory Cosmopolitans and tequila shots. I worry about having to explain why I’m not eating meat at dinner parties even though I’m not a vegetarian. I stick to meat that is certified “halal,” meaning that the animal is raised ethically, and then slaughtered in a certain way.

No one should have to deal with the anxieties that come with being perceived as a “good” immigrant.

I worry about being seen in public in my traditional dress — a salwar kameez, which is the most comfortable outfit on earth — for fear of being seen as someone who isn’t willing to assimilate. I love a comfy pair of jeans as much as anybody, but when I’m running errands after a hectic week, the task just calls for airy, harem-style pants and a loose, flowy, caftan top. But the price for this comfort is uncomfortable stares and the fear that someone may physically lash out at me because of what I’m wearing.

As a force of habit, I regularly use terms like “Mash’Allah” (as God willed), “Allhumdullilah” (praise be to God), and “Subhan’Allah” (God is perfect). These are standard terms in Islam that refer to gratefulness and help us stay rooted. These are words of kindness within my cultural context, and kindness should be applied liberally. And yet I hold them back now, because I’m afraid those words will be received with suspicion and heard as a threat.

I often wonder if I’m condemned to feel this way for life, whether I might always feel like I’m not doing enough to be a “good” immigrant. But I know I live my life as authentically as I can.

We are all the sum of our own unique and diverse cultural experiences, and that means our understandings of American culture differ. I live in anxiety that some part of my religious identity that is perceived as “too alien” will preclude me from being a “good” immigrant. But why should this be the case? Everyone should be willing to challenge anyone who insists there is one authentic way of being American, because that type of thinking is what leads to people like me feeling like they’re straddling the line between “good” immigrant vs. “bad” immigrant.

I want those who feel they can justify holding immigrants to an arbitrary definition of “American-ness” to reflect upon this impossible dichotomy, because being a “good” immigrant or an authentic American shouldn’t depend on the way I live my religious identity or how I dress. No one should have to deal with the anxieties that come with being perceived as a “good” immigrant.

Even though my religious identity may not represent the majority in America, I AM a good immigrant, because I am here to do good. It is as simple as that. I am here, in the United States of America, searching for my sense of belonging. All I am asking for, as a Muslim woman, is to not be judged as unworthy for the more “alien” aspects of my religious identity.