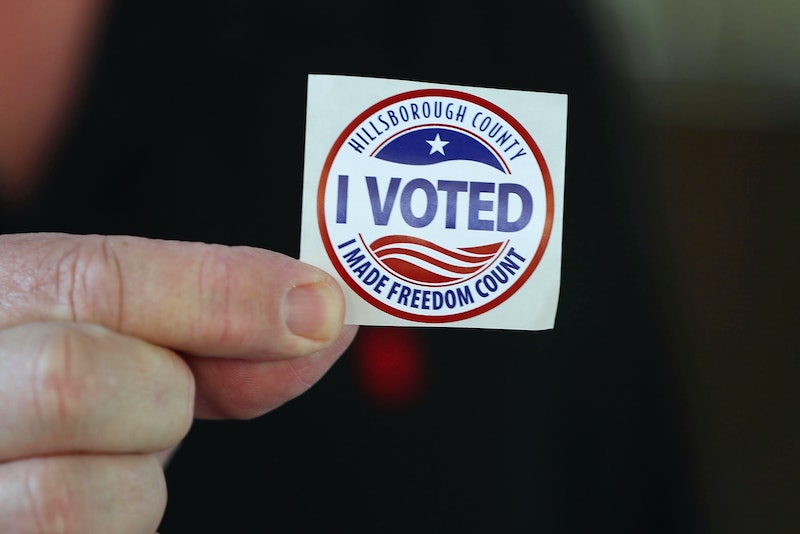 The midterm elections are coming right up, and they'll serve as the first electoral referendum on Donald Trump's tenure as president. But what happens if you don't vote despite being registered to do so?

In all likelihood, nothing. Of course, some might argue that if you don't vote, you give up the right to complain about the outcome of the election, but in practical terms, refusing to cast a ballot probably won't have any direct consequences.

There's a chance, however, that it will. Voting isn't a legal requirement in America, unlike in some other countries; however, failing to do so could result in your name being removed from the voting rolls in future elections. The Supreme Court ruled in January that it's legal for states to kick residents off of voter registration rolls if they fail to vote in past elections, and six states have laws like this on the books.

The specificities of these laws vary by state. But if you live in Ohio, Georgia, Oregon, Pennsylvania, Oklahoma, West Virginia and Montana, your ability to vote in future elections could be imperiled if you don't vote in this one.

This is already playing out in Georgia. In the lead up to his own campaign for governor, Republican Secretary of State Brian Kemp invalidated 1.4 million Georgians' voter registrations. The purge disproportionately affected black voters, and according to an analysis by Let America Vote, 850,000 of the registrations were thrown out simply because the Georgians in question hadn't voted in the last two elections. Kemp is running neck-and-neck with Stacey Abrams, a voting rights activist, for the governorship in 2018.

In theory, there's a fairly simple solution to being kicked off of voter registration rolls: Simply re-register to vote. But this is of no help to voters who, for instance, weren't notified that they'd been removed from the rolls, and don't realize that they were until after the deadline to re-register — which again varies by state — has passed.

(If you're not quite sure whether you're registered to vote, or are curious where your polling place is, you can find out here and here, respectively.)

In a more general sense, not voting can have serious electoral consequences. For instance, one study found that around 5 percent of millennials who voted for Barack Obama didn't cast a ballot in 2016 — and that if they had, Hillary Clinton would have probably won the election.

America has notoriously low voter participation. In the 2016 election, around 56 percent of voting-age Americans cast a ballot; according to data from the Pew Research Center, that's lower voter participation than in Mexico, Estonia, Italy and 21 other developed countries. Interestingly, although the share of voting-age citizens who cast ballots is relatively low in America, the share of registered voters who do so is the third-highest in the developed world.

It's too soon to say whether the midterms will produce higher turnout than normal, but some preliminary evidence suggests that they might: According to Pew, turnout in congressional primaries was 56 percent higher in 2018 than during the last midterms.