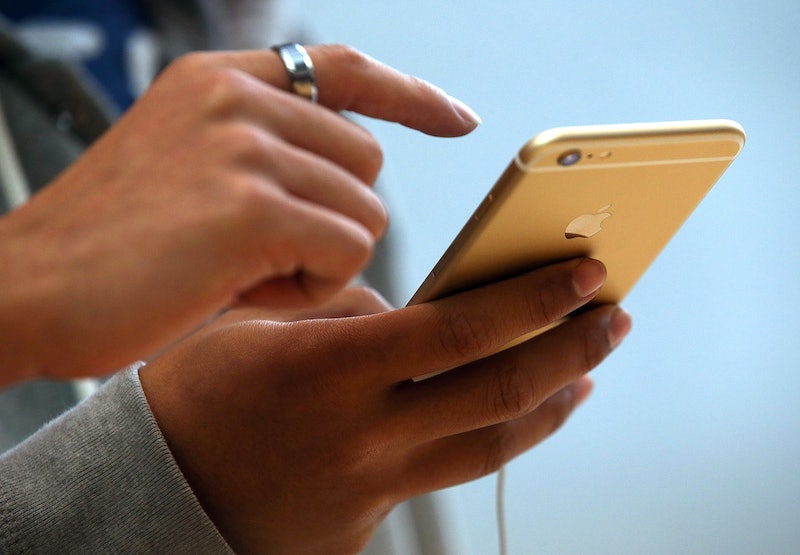 The iOS 13 software update is expected to come out soon, but the iOS your iPhone 6 has at the moment might be what you're stuck with — at least for now. The latest software update won't be compatible with the iPhone 6, and though that doesn't render the phone useless, it could be a reason to buy a new one. And until you get that newer model, it's worth figuring out what iOS version you're currently using, and whether downloading a newer one is an option.

Luckily, it's super easy to figure out what update your phone is currently operating on. You simply go to the settings app, then click the "About" tab. The second row of information in that section will tell you what software version you have installed on your phone. This should be iOS 12, if you've downloaded the most recent update. But if you haven't, there's another quick fix for that, too.

If your phone is way behind on updates, you should see a little red circle by the "General" tab in your settings app. Clicking on that tab will direct you to download a new update. Of course, you might have to figure out storage if your phone is crammed with photos and other types of data that take up space. But if not, iOS 12 is mere minutes away.

It's not the end of the world if you don't always have the latest iOS update as soon as it's released. But it is important to try to update your phone regularly, so that you don't deal with annoying glitches or risk a security breach. New iOS versions usually come with a security update for your phone.

For this reason, you're likely going to have to consider getting a more recent iPhone model soon, if you have the iPhone 6. This is because iOS 13, the new software update coming out this fall, will not be compatible with the iPhone 6, as mentioned above. All newer models, including the 6S and 6S Plus, will be able to install the update.

That doesn't mean it's time to panic if you're an iPhone 6 user. It just means you should start considering your options. For example, you can contact your phone retailer to see when your next upgrade is and plan to get a newer model then. Or you can consider buying an iPhone straight from Apple, if you don't have an upgrade for the foreseeable future. If the price of a brand new iPhone is less than ideal for you, you can also consider buying your phone on eBay or from a retailer that sells refurbished phones, which can often cut the price in half or even more.

So for the long term, you're likely going to have to buy a new phone. But for the short term, you can check what iOS you're already working with and make sure you're up to date. That way, your phone will be running as smoothly as possible, up until the very last day you have it.