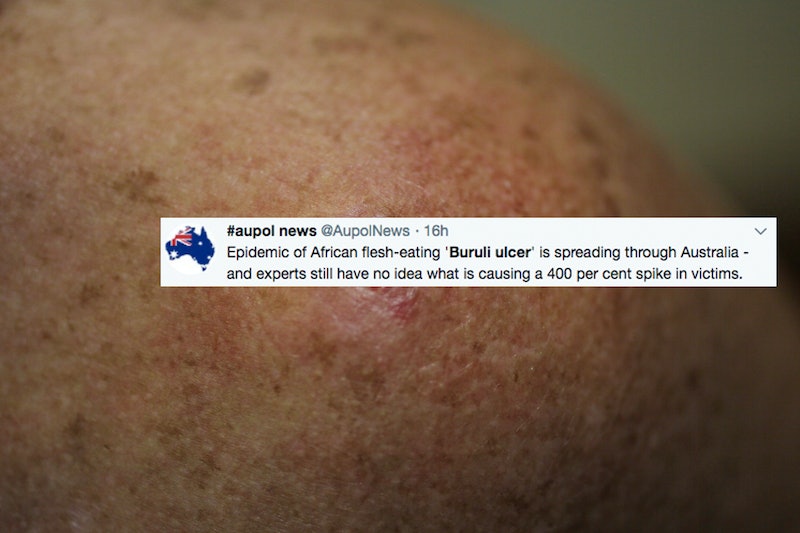 When you hear the word ulcer you probably think of a sore that causes stomach pain. However, ulcers can also develop on the skin, and some of them pose life-altering health risks. What is a Buruli ulcer? This flesh-eating ulcer is spreading in Australia, and can cause severe physical and emotion pain, according to an article published today in the Medical Journal of Australia. It sounds like a storyline from Grey's Anatomy, and "[Buruli ulcers cause] severe destructive lesions of skin and soft tissue, resulting in significant morbidity, in attributable mortality and often in long term disability and cosmetic deformity."

According to the World Health Organization's website, "Buruli ulcer is a chronic debilitating disease caused by Mycobacterium ulcerans. It often affects the skin and sometimes bone, and can lead to permanent disfigurement and long-term disability." Basically, it eats away at your body. While advances in medicine mean that Buruli ulcers can be cured, the MJA reported that medications to treat the ulcers are often not covered under health plans in Australia, and are so expensive that some patients can't afford them. Between medication, multiple hospitalizations, and surgery to repair deformities caused by Buruli ulcers, those afflicted can end up spending around $14,000 to treat the condition. The journal noted that an average of 2,000 cases are reported worldwide each year, mostly in tropical regions.

While it's not common in the U.S., Buruli ulcers are prevalent in more than 30 countries around the world, and are from the same family of bacteria as tuberculosis and leprosy, the WHO noted. This means that if you're traveling to one of the countries where the disease is present — tropical regions in Africa, Asia, and Australia — you'll want to be aware of the symptoms. It's not yet known how people contract the ulcers, and there is no known way to prevent them. The Centers for Disease Control and Prevention noted on its website that symptoms include swelling of the skin accompanied with destruction of skin tissue, often without any pain.

If treatment is not sought immediately, the ulcers could lead to bone infections, permanent disability, and secondary bacterial infections. "The delayed recourse to surgery — the main treatment for the ulcer — is much more traumatic than if carried out early, when it is highly effective," the International Website of Médecins Sans Frontières explained. "At a later stage, wide excisions or removal of the affected skin area, including healthy tissues, are recommended to stop the infection and prevent recurrence or relapse at the same site. It requires skin grafting and means a long stay in hospital." MSF also wrote that the Buruli ulcer is named after a county in Uganda.

The website Study.com's Critical Care Nursing section reported a case of a man from the U.S. who contracted a Buruli ulcer while vacationing in Australia. "A couple days after returning home to the U.S., Nick noticed that he had developed several pimple-like sores on both of this arms, and these sores progressively got worse as time went on. After a couple weeks, they started to look like skin ulcers," Dan Washmuth wrote for the website, adding that Nick was treated with antibiotics and did not sustain and long-term damage. Even though the infection is generally only found in tropical regions, the epidemic is spreading to Victoria, Australia.

Dr. Jyothi Shenoy shared her experience of having a chronic Buruli ulcer infection on the website DisorderFree.org. "Initially, this disease seemed like any other infection. However, it turned out to be the worst nightmare of my life. It’s not a minor infection that goes away within a few days. In my case, [three] years have already passed and I am still reeling under the burden of this infection." She noted that the ulcers have significantly altered her appearance, caused her to miss work, required multiple trips to the hospital, and have left her severely fatigued. You can't catch a Buruli ulcer from an infected person, but if you do travel to a country where the infection is present, and you start to experience symptoms, getting treatment sooner rather than later can increase your chances of a positive outcome. Because, this sounds like a complete horror show. #TheMoreYouKnow