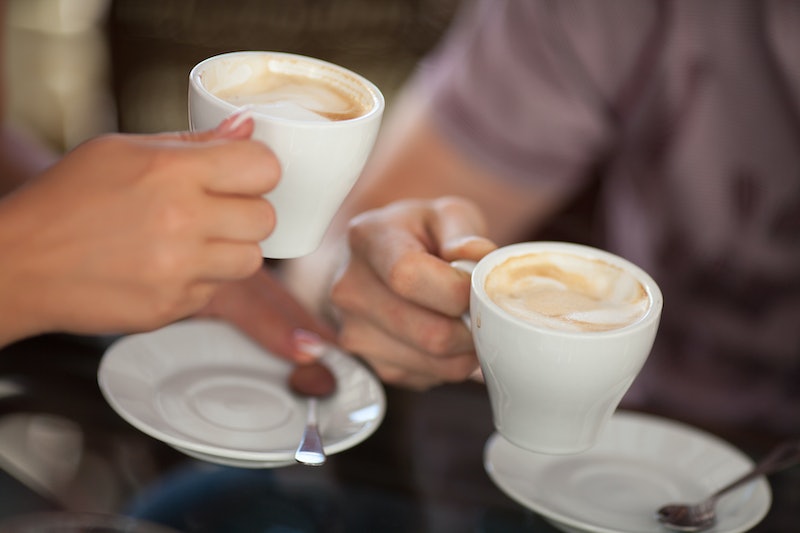 Some people will go to extreme lengths to "cleanse" their bodies (which, by the way, do a great job of "detoxing" on their own, thank you very much). Heard the latest? "Coffee enema" is now a term that has entered the lexicon, thanks to a Goop detox guide that recommended a machine made for that express purpose. In an article called "The Nuts and Bolts of Colonics," Goop linked to the $135 Implantorama System, which is, per the Implantorama website, "a clean way to do coffee enemas, ozone water enemas, or nutrient implants."

Though Goop put a disclaimer in its article stating that it is not "a substitute for professional medical advice, diagnosis, or treatment" and did not specifically recommend the coffee enema itself (just the machine), the concept still raised a lot of eyebrows across the internet. It should hopefully go without saying, but there are a lot of reasons a coffee enema is a bad idea.

Like the vagina, the colon cleans itself, so there's really no need for you to spend your hard-earned money messing with your body's natural process. The product page for the coffee enema self-administering device claims, "Coffee enemas can mean relief from depression, confusion, general nervous tension, many allergy related symptoms and, most importantly, relief from severe pain. Coffee enemas lower serum toxins."

Um, no. In fact, coffee enemas can be pretty dangerous. The American Journal of Gastroenterology reported that coffee enemas can cause proctocolitis, which is inflammation of the rectum and colon. "Coffee enema has no proven benefit and carries considerable risk of provoking unwanted complications," the journal noted. What's more, unless you've been poisoned, there is really no need to do any kind of cleanse or detox at all.

"If your goal is to detox your system, don’t waste your time or money. Your body is an expert at getting rid of toxins no matter what you eat. Toxins don’t build up in your liver, kidneys, or any other part of your body, and you’re not going to get rid of them with the latest detox wonder," Dr. Michael Smith told WebMD. "Especially avoid diets that promise to detox your liver with supplements or 'cleanse' whatever the diet determines needs washing out."

That's not to say you can't change your eating habits to emphasize non-processed foods, but jump-starting the desired change with a "detox" isn't going to be helpful. "The only type of detox diet that is worthwhile is one that limits processed, high-fat, and sugary foods, and replaces them with more whole foods like fruits and vegetables," Dr. Smith advised.

Additionally, the Journal of Family Practice details several cases of people who suffered adverse reactions from colonics, including vomiting, diarrhea, overall weakness, dizziness, severe abdominal pain, and even renal failure. While new cleanse trends seem to pop up every year, colonics and enemas have been around a long time and have recently experienced a revival.

The Journal of Family Practice reported that colon cleansing was popular in ancient times because people believed that the waste in your colon could poison you (it cannot). Though the American Medical Association condemned colon cleansing in 1919, it's experienced a resurgence of popularity in recent years. It's important to note that people also used to believe in bloodletting, which is purposefully making a person bleed to cure diseases, which is another "medical" practice I truly hope doesn't come back.

According to the Journal of Clinical Gastroenterology, "Today we are witnessing a resurgence of colonic irrigation based on little less than the old bogus claims and the impressive power of vested interests. Even today's experts on colonic irrigation can only provide theories and anecdotes in its support. It seems, therefore, that ignorance is celebrating a triumph over science."

Things like coffee enemas promote the false perception that you can shortcut your way to optimum health by doing something that makes zero sense, and is even potentially dangerous. If there is one lesson I have to learn over and over again, it's that there are no shortcuts in life.

The key to being healthy is making a commitment to making healthy choices, and that can take a long time because habits are hard to break. Trying to bypass putting time and energy into achieving any goal is only going to leave you disappointed in the long run, especially if you're doing it because [insert celebrity here] is doing it. If that's not reason enough to shun the coffee enema cleanse, consider that it could also leave you with an inflamed rectum. No, thanks.

More like this
6 Abortion Advocates To Follow On TikTok
By Sara Youngblood Gregory
So You're Having A Medication Abortion
By Dana Smith
The Benefits Of Omega-3 Supplements, According To Experts
By Carolyn Steber
How To Take A .5 Selfie On An iPhone
By Emma Carey
Get Even More From Bustle — Sign Up For The Newsletter