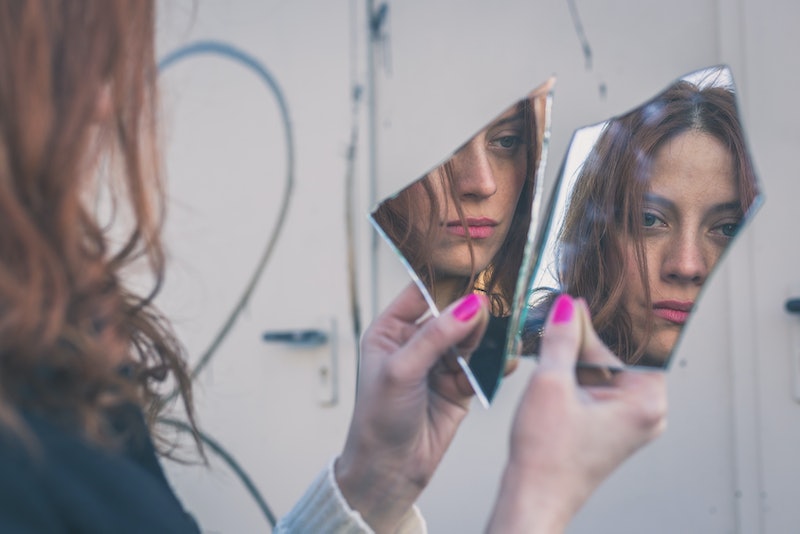 You've probably experienced, at one point or another, someone telling you that they saw someone who looked exactly like you. Or perhaps you're the one who thought for sure you saw a person you knew, only to find out it was just a random lookalike. Could it have possibly been their... doppelgänger? If you're judging by the supernatural meaning of a doppelgänger, then I certainly hope it wasn't. Today, we often use the term doppelgänger casually to refer to a "twin stranger," or a random person who just so happens to weirdly look a lot like you. Coming across an almost-identical stranger can definitely be freaky, but the original interpretation of a doppelgänger is way more disturbing.

So exactly what is a doppelgänger in supernatural terms? The word itself translates literally to "double goer" or "double walker" in German, and it's defined as "a ghostly counterpart of a living person." In traditional folklore, doppelgängers are usually considered to be ghostly apparitions or entities rather than physical beings, and almost always sinister in nature. The sight of one — either your own or someone else's — is widely considered to be a bad omen, as doppelgängers are supposedly harbingers of darkness, bad luck, and sometimes straight-up evil. "[T]he idea of a spiritual, ghostly or demonic double ... of living people have existed for millennia," explained The Paranormal Guide. "Much of the time, a doppelgänger is viewed as an omen for a tragedy, illness, or death of the person who is copied." You know the "evil twin" trope that's common in so many cultures, playing out in literature, art, film, and more? That's likely tied directly to the mythology of the doppelgänger.

So according to legend, how could one identify their doppelgänger? Well, first of all, the dead giveaway is that they'd look exactly like you (or at least very, very similar), and would essentially be you in every way except for that, well... they're not. According to The Paranormal Guide, "These doubles may at times be seen by others as performing a person’s actions before the real person makes them, or they may be a shadow, performing the same movements, but after they have happened." Many historical reports claim doppelgänger sightings have been a premonition for death and tragedy, and these apparitions have other strange, paranormal qualities as well. "The doppelgängers of folklore cast no shadow, and have no reflection in a mirror or in water," explains metaphysics website Crystalinks. And while doppelgängers themselves allegedly have no reflection, there are many reports of people seeing their own doppelgänger in the mirror, either next to their actual reflection, or as a distorted version of it.

A very famous doppelgänger sighting was in the case of president Abraham Lincoln, who allegedly claimed he saw a double reflection of himself in the mirror with his face appearing in "two separate and distinct images." The second face, though, was distinctly paler and more sickly-looking than his actual reflection. He allegedly shared this haunting experience with his wife, and according to Ancient Origins, "[she] was said to be very worried and told Lincoln she believed that the paleness of half the dual image was a bad omen, which meant that Lincoln would serve his first full term, but would not live to finish his second." Tragically (and bone-chillingly), this proved to be true. Whether that reported doppelgänger sighting was a warning or a premonition is up for debate, but honestly, it's creepy AF either way.

So your alleged "evil twin" could, according to doppelgänger mythology, appear to you or someone else at any time, bringing negative omens galore — but apparently, they might also try to mess with your head. Many doppelgänger accounts suggest the apparition "might attempt to provide advice to the person they shadow, but that this advice can be misleading or malicious," according to Ancient Origins. "They may also attempt to plant sinister ideas in their victim’s mind or cause them great confusion," and apparently, they may also try to interact with others as you, which adds a whole new layer of confusion. In all cases, it's considered advisable to never interact with your doppelgänger, as it's thought to bring even more bad luck.

And while there are many reports throughout history of doppelgängers serving as bad omens or appearing as supernatural apparitions, sometimes you may just come across a regular person who, by freak chance, looks a lot like you. In playing the game of genetic roulette, there's always a chance that someone somewhere will end up looking strangely similar to someone else, even though there's no direct relation. We only have so many genes in the collective human gene pool, and while there are definitely a lot of variations, apparently those variations are eventually finite. "We aren’t that genetically diverse," reported Canada's Global News, "So eventually, the numbers would dictate that certain features resembling yours ... will randomly combine." That means that, according to science, it's totally possible for you to come across a stranger — an actual person, not a foreboding apparition — who looks eerily just like you. This could possibly explain some of the seemingly paranormal reports of doppelgänger sightings throughout history, but who's to say? In any case, here's to hoping that if you ever do spot a doppelgänger, it's of the modern day, non-ghostly persuasion, with zero bad luck vibes in sight.