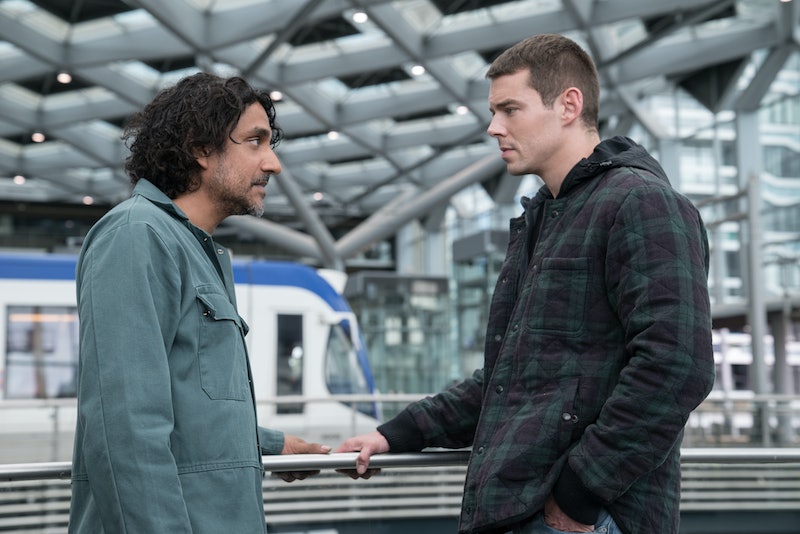 Sense8 weaves a gripping but tangled narrative, tracing the lives of eight strangers who suddenly discover they're psychically linked. When the series debuted back in 2015, they were just coming to terms with their newly unearthed identities, and when Season 2 returns to Netflix on Friday, they'll continue to piece together who (and what) they are. That means learning a few new terms, and as fans settle in to watch the fresh batch of episodes, one in particular may be puzzling them right out of the gate. What is a homo-sensorium?

Essentially, it's just a more formal name for sensate, which is what the main characters and those like them are called. Sensate is actually a real word, meaning "relating to or apprehending or apprehended through the senses." Though Sense8 obviously uses it in a different capacity, it's a fitting definition, since the sensates can see, hear, and feel, everything each other is experiencing.

Homo-sensorium, however, is a term dreamt up specifically for the show. It can be described as an evolved variant of the "homo-sapien," which, for those who don't know, is the scientific genus for humans. As a a refresher, sensates are human, they're just distinguished by a small genetic mutation that allows them to be mentally and emotionally linked to others of their kind.

Homo-sensorium are grouped into clusters of people. Each of the members are physically born on the same day at the exact same moment, and later in life, they're born again as sensates. They can then communicate with one another through sharing or visiting. During sharing, they can access each other's skills and knowledge — for example, Nomi's technical prowess or Sun's kung-fu mastery. Visiting, on the other hand, is basically exactly what it sounds like, but without any travel time. Sensates can mentally connect from anywhere across the globe, appearing as if they are physically present.

Though Sense8 never gives an explicit definition of homo-sensorium, the term is used interchangeably with "sensate" throughout Season 2. As described in Episode 2, the founder of BPO — the organization now hunting down the sensates — believed sapiens and sensorians to be "obilgate mutualisms" dependent on one another for survival. BPO was initially dedicated to a natural and ethical balance between the two species, but after 9/11 gave rise to the War on Terror, sensates were viewed as an immediate threat to secrecy and sovereignty, and the organization began targeting them as such.

Now, the sensates find themselves embroiled in an escalating war between BPO and themselves, and as they begin to uncover more clusters, they'll have to figure out who, if anyone, they can trust. Watch it all unfold in Sense8 Season 2 on Netflix.