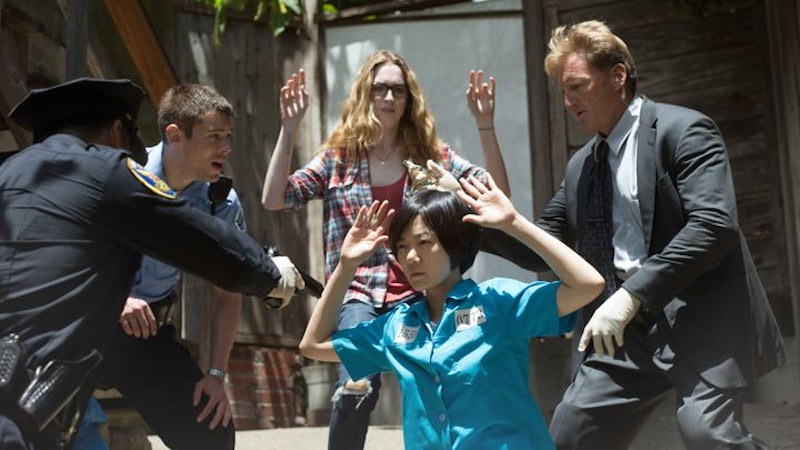 As much as I love them, Andy and Lana Wachowski, the siblings behind the groundbreaking Matrix series, are having a rough go of it at the box office right now. Their last few films, Jupiter Ascending, Cloud Atlas, and Speed Racer, didn't catch on the way the Matrix series did. So, they're taking the next logical step, and moving production to Netflix instead. Their show, Sense8 , which premieres on Netflix on June 5, follows a group of strangers who suddenly gain the power to experience each other's lives. There are bigger forces at work — they start to get visits from a mysterious person named Jonas (Naveen Andrews from, fittingly, Lost) — but the real connection doesn't become clear until later. But, what about the title? Why is the Netflix show called Sense8 ?

The Wachowskis aren't ones to hide the meanings of their title. The Matrix, after all, is about The Matrix. Jupiter Ascending may have a double meaning, but it's not all that hard to figure out once you realize that Mila Kunis' character is named Jupiter. Still, it's fun to speculate. So, here are eight reasons why the show could be called Sense8, from most sensible to — in true Wachowski fashion — totally bonkers.

There Are Eight Main Characters

This is the most obvious reason for the whole eight thing. There are eight main characters in the cast, and they start to see — and sense, naturally — events from each other's lives. What their connection means will be revealed as the show goes on, but the title is clearly a reference to their octo-bond.

The tagline for the show is "Ordinary people reborn as 'Sensates.'" I don't really use the word "sensate" in my everyday life — in fact, I had to look it up — but according to the Merriam-Webster dictionary it says, "apprehended through the senses." Yup, that sounds about right for this series.

The Wachowskis Are Sensational

I'm a huge Wachowskis supporter, so I'd never call any of their movies bad. (Yes, I liked those Matrix sequels!) But, even when they're, let's say, not at their best, they still succeed in overloading the senses. (In a good way!) Take one of their less successful movies, like Speed Racer, (which, by the way, I saw in IMAX on opening weekend—and everyone I meet who did the same talks about how awesome it was, like we're all in a secret club). It may not have lit imaginations on fire the way The Matrix did, but it was still so full of pans, zooms, bright colors, wipes, and images superimposed on other images that it's almost too much to look at, but still totally amazing.

The Wachowskis were never ones to fit neatly into any given box. Now, they have eight boxes to play with, and for their audience to experience (or sense). "Sense8 is structured as essentially eight parallel 'shows' — each with a different genre and tone," James Poniewozik wrote in Time. I can see the Wachowskis being attracted to that kind of structure, because that's basically what they were doing in Cloud Atlas.

For anyone who had to take karate class in kindergarten, you know "sensei" is a respectful term for a martial-arts instructor. Andy and Lana "I Know Kung Fu" Wachowski seem a little obsessed with martial arts, so I'm sure they were tickled by the aural similarity.

We Only Have Five Senses — What Gives?

Yes, we know our five senses: sight, smell, taste, touch, and feel. The Sixth Sense told us that the next sense is the ability to tune in to the paranormal, and others believe that the seventh sense is a psychic ability. So, I guess an eighth sense would be the ability to jump into someone else's mind and experience what they're experiencing?

Six is over. If Adam Sandler didn't ruin it with his Ridiculous Six project and its treatment of Native Americans, Sony will put the final nail in the coffin with its half-dead, Spider-Man-adjacent Sinister Six movie. Six is not a number you want to throw your lot in with right now. Instead, eight is ascendent, since Quentin Tarantino's Hateful Eight is going to be freaking awesome.

In some cultures, like Chinese culture for example, eight is a lucky number. And, with apologies to my poor beloved filmmakers, with the run of mixed-review movies they've been having, the Wachowskis need a little bit of luck right now. Hopefully Sense8 will be the project we've all been waiting for.

More like this
What’s New On Netflix: A Victoria Justice Rom-Com & The Return Of David Letterman
By Arya Roshanian
What’s New On Netflix: The Return Of 'Bling Empire' & A Rebel Wilson Comedy
By Arya Roshanian
Oops! The 'Stranger Things' Monopoly Game Has Spoilers For Season 4
By Alyssa Lapid
20 Photos From The 'Stranger Things' Season 4 Premiere To Make You Feel Old
By Alyssa Lapid
Get Even More From Bustle — Sign Up For The Newsletter