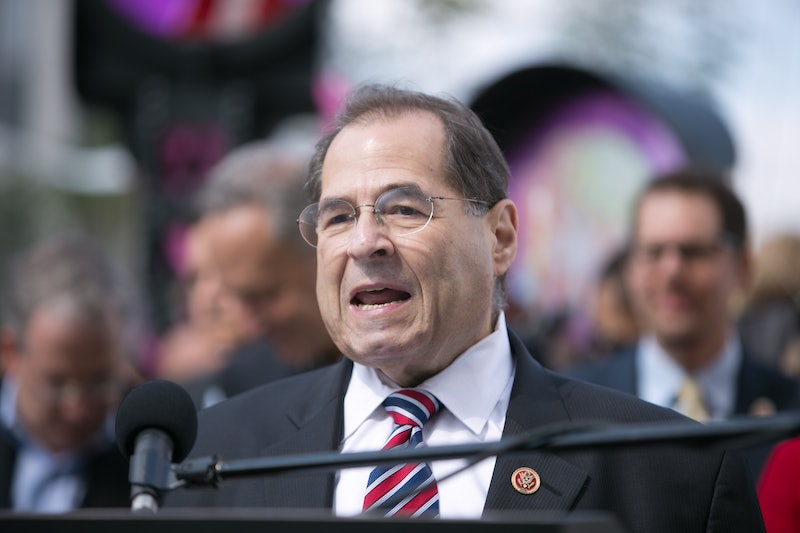 On Thursday, New York Rep. Jerrold Nadler filed what's called a "resolution of inquiry" in an attempt to get information from the Justice Department about any investigations the department may or may not have launched into Donald Trump, his business holdings, and his team's alleged connections with the Russian government. (Trump has denied doing business with Russia.) As soon as Nadler announced this, many people who aren't members of Congress wondered: Exactly what is a resolution of inquiry?

A resolution of inquiry is a tool that members of the House of Representatives can use to obtain information from the executive branch. It operates differently than most orders of business in the House, and is an especially powerful tool for the minority party. In this instance, Nadler is asking for "copies of any document, record, memo, correspondence, or other communication of the Department of Justice" that relate to two general areas of worry regarding Trump's administration.

The first is his business holdings. Nadler wants all Justice Department documents related to the question of whether Trump, by continuing to operate his hotels while president, is in violation of the Emoluments Clause of the Constitution. He's also requesting all information the DOJ has about foreign governments' investments into Trump-owned property, should such information exist.

The second area targeted by Nadler's resolution of inquiry is Trump's alleged connections with Russia. Trump has denied having any investments in Russia. Specifically, Nadler is asking for documentation on "any criminal or counterintelligence investigation" that targets Trump, National Security Adviser Michael Flynn, former Trump campaign chair Paul Manafort, former Trump adviser Carter Page, longtime Trump confidant Roger Stone, "or any employee of the Executive Office of the President."

That's the substance of Nadler's resolution. But how exactly does it work? This requires us to get a bit into the weeds.

In most situations, the full House isn't required to vote on a resolution until the relevant committee reports it out — if the committee tables it, it's dead in the water. Because the majority party has control of all committees (by definition), this usually means that members of the minority party can't force the full House to vote on, well, anything. But a resolution of inquiry has something called "special status," which means that if the relevant House committee rejects or ignores it, the member who introduced it can force the House to vote on it regardless after 14 business days.

Note that this doesn't mean the executive branch is forced to give up the information in question. The House could still vote the resolution down. If it does, however, every House member is on the record opposing the request for that information — in this case, information about Trump and his team that is very much in the public's interest.

You can read the text of Nadler's resolution here.