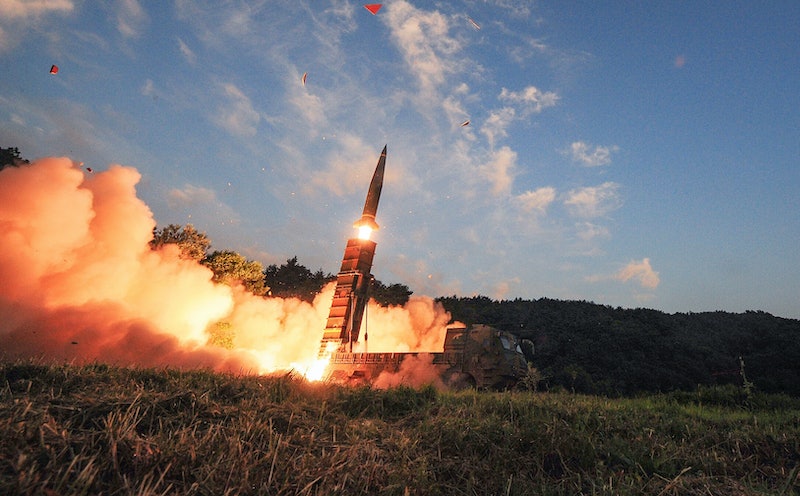 The seismic scales shook in North Korea on Sunday, when they tested their most powerful weapon to date. They claim that it was a hydrogen, or thermonuclear bomb — but if you're not familiar with nuclear terminology, you need to know what a thermonuclear bomb is in order to fully appreciate why people are so worried about this news.

One key piece of information is that no one has ever deployed a thermonuclear bomb in war, ever. The bombs that the U.S. dropped on Hiroshima and Nagasaki to end World War II were atomic bombs, which rely on the process of nuclear fission to break up uranium or plutonium atoms, thereby creating an extremely powerful explosion.

Thermonuclear bombs, on the other hand, add another layer of destructive power to the power that an atomic bomb already harnesses. Instead of fission, they use fusion, which means that they fuse together hydrogen atoms to create power in literally the same process that happens at the core of the sun. The force that starts this fusion in a true thermonuclear bomb is actually an atomic bomb of the same sort that the U.S. used in World War II. The New York Times explains that there are different stages in the development of a hydrogen bomb, and in the final, most destructive stage, the bomb relies on an atomic bomb to ignite a solid chunk of thermonuclear fuel — leading to an explosion 1,000 times more powerful than the explosion that rocked Hiroshima in 1945.

North Korea announced that they had actually tested a hydrogen bomb that could be fitted to an intercontinental ballistic missile (ICBM), but no independent observer has been able to confirm that. While it is clear that the Hermit Kingdom did in fact detonate its most powerful weapon to date, it's unclear whether it was a true hydrogen bomb or if the regime is just trying to exaggerate their power. The state-run media service released photos allegedly showing leader Kim Jong Un watching a nuclear bomb being put onto an ICBM, but no one can yet tell whether the bomb in the photos was the one tested or not.

Evidence shows that the bomb tested was about seven times more powerful than the Hiroshima bomb, which suggests that it is not a fully fledged thermonuclear bomb. It could have been a type of boosted atomic bomb, which would include some amount of thermonuclear fuel to make it more powerful. This is nothing to scoff at; MIT nuclear expert Vipin Narang told the Washington Post that North Korea could "destroy the better part of a city with this yield" even if their ICBM technology isn't particularly accurate.

For now, the rest of the world is united in condemning North Korea. Kim Jong Un has all the reason in the world to keep the threat of nuclear destruction as just a threat, as he would undoubtedly lose his power if he began a nuclear war. If this weapon is indeed the sort of powerful thermonuclear bomb that North Korea claims it is, then the country's adversaries can only hope that that logic holds.