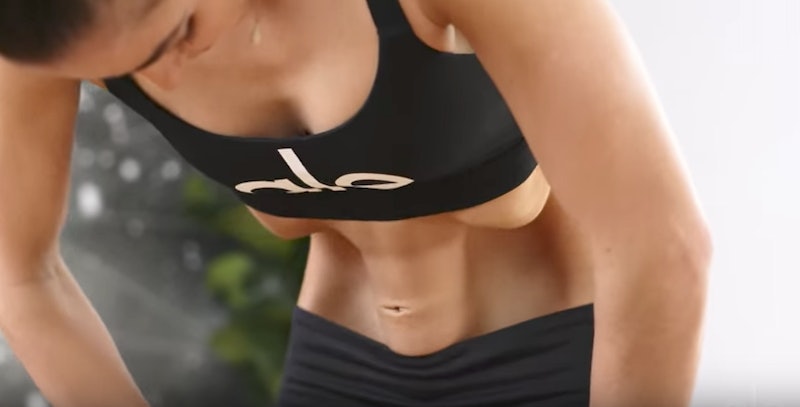 An unearthly new yoga trend is blowing up the Internet, leaving fitness fans and X-Files fanatics alike, asking, "What is Alien Yoga?" The technique involving strange contortions of the human body that look downright extraterrestrial has become popular on social media, with videos of the out of this world practice flooding Instagram and YouTube. Alien Yoga is based on an ancient yogic cleansing exercise (also known as a kriya) called Nauli from the Hatha practice, that is said to promote digestion and help strengthen the core. Practitioners exhale completely, isolating the abdomen and pulling it under the rib cage, then contract and release their abdominal muscles so that they appear to dance. Compared to past viral crazes such as beer yoga or goat yoga, this may be the strangest one yet.

Though "Alien Yoga" has been around for quite some time, the practice of Nauli is not typically taught in Western yoga classes, so even well-versed yogis might not be familiar with it. While challenging, it can supposedly be mastered by a person of any age and level of experience, and according to Nauli.org, in some classical traditions it was among the first exercises taught to students.

In order to properly master this Hatha kriya, students must first be able to perform "Uddiyana bandha" – the complete emptying of the lungs and pulling of the abdomen in and up under the rib cage. To do this the practitioner bends over, and places their hands right above their knees and exhales with a hissing sound. The two long muscles that run in front of the abdomen known as the rectus abdominis are then contracted and isolated. In Nauli, the muscles are manipulated so as to produce a flowing wave-like motion, which can supposedly take between three months to one year to perfect with practice — or, for me, never.

The move does make the stomach look alien-like, but, sadly, it has very little to do with Mulder and Scully.

According to Yogicwayoflife, the benefits of Nauli are seemingly boundless. The movement supposedly acts as a purification method that massages all the organs located in the abdomen, keeping them in tip-top working condition. It is also said to benefit digestion, correct hormone imbalances, produce happiness and emotional stability, and improve willpower (so, basically, it fixes everything?).

Since Alien Yoga is all about the stomach, the best time to attempt the Hatha practice is early in the morning, before you eat or drink. Yoga blogs warn that it should only be attempted in the presence of a qualified yoga instructor, as the intense contractions could cause discomfort, indigestion, or even minor injury if done improperly. So, if you're looking for a relaxing, restorative yoga technique, this viral practice might not be for you. As someone who is still trying to get their heels to touch the floor while in downward dog, I'm going to give this one a hard pass.

More like this
The UK Abortion Laws In 2022, Explained
By Sophie McEvoy
6 Abortion Advocates To Follow On TikTok
By Sara Youngblood Gregory
How To Protect Your Digital Privacy If You Need An Abortion Post-Roe
By Kaitlyn Wylde
Travis Barker & Kourney Kardashian’s Updates About His Health Are Promising
By Stephanie Topacio Long
Get Even More From Bustle — Sign Up For The Newsletter