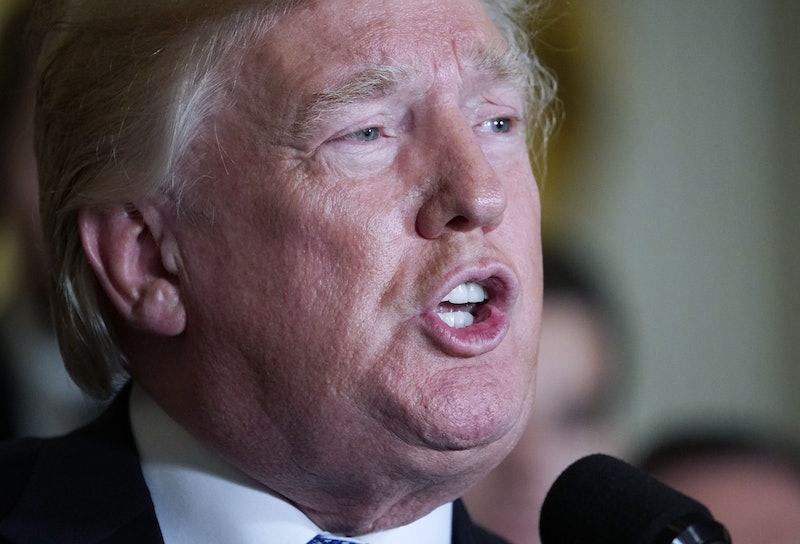 Nuclear nonproliferation has been the stated goal of every president since Ronald Reagan — that's 37 years of uninterrupted American policy, a strategy about as old as President Trump's adult children. And yet, according to an NBC News report, in a July meeting at the Pentagon, Trump expressed his desire to build up the U.S. nuclear arsenal to almost ten times its current size. Some have pointed out that this stunning request from Trump was what prompted Secretary of State Rex Tillerson to dub the president a "moron," a comment that reportedly followed this very same meeting.

Update: Trump denied the NBC News report in a tweet on Wednesday morning that read: "Fake @NBCNews made up a story that I wanted a "tenfold" increase in our U.S. nuclear arsenal. Pure fiction, made up to demean. NBC = CNN!"

Military officials were briefing Trump on the trajectory of the U.S. nuclear weapons stockpile, and reportedly showed the president a slide pictorially demonstrating the number of said weapons declining. Officials relayed to NBC News that it was then that Trump jumped in and voiced his desire to turn that downward slide around. And according to officials present at the meeting, Trump didn't restrict his expansion goals to just growing the U.S. cache of nuclear arms — he also wanted a broader military increase of personnel and other weapons.

Some present at the meeting reportedly took Trump's military ambitions as indicative of his ignorance on American policy and the complex processes involved in a nuclear arms build up.

Chief among the many problems with Trump's dismissal of nuclear nonproliferation is the arms race such an American policy shift would almost certainly set in motion. Should the United States begin to build up its nuclear weapons arsenal, Russia would likely feel both obligated and free to do the same. That's to say nothing of how other adversarial powers — most notably, Iran and North Korea — would react. Both nations are regularly hostile towards the United States, and could use the American policy as justification for their own sprint towards nuclear weapons. An indeterminate number of other countries would likely follow suit.

That the president himself did not seem to recognize this very predictable and extremely ominous chain of events is deeply troubling to many. Among those put off by Trump's ignorance was reportedly Tillerson, whose now infamous "moron" comment has a clearer (possible) antecedent for the secretary of state.

Officials present told NBC that during the July 20 meeting Trump pointed to the slide showing America's shrinking nuclear arsenal, and said he wanted to make it as large as it had been at its 1960s peak of 32,000 weapons. Currently, the United States has about 4,000 nuclear weapons.

This latest report of Trump's desire to increase the number of U.S. nuclear weapons echoes comments Trump has made over several decades. Sarah Kendzior has extensively documented the long-time fascination Trump has expressed with nuclear weapons and their use. In an article for Quartz, Kendzior included some of Trump's "greatest hits" quotes about nuclear weapons. In March 2016, Trump replied to a question of who he consulted with on matters of foreign policy, "I'm speaking with myself, number one, because I have a very good brain and I've said a lot of things." During an interview with Chris Matthews during the 2016 campaign, Trump said using nuclear weapons might sometimes be necessary. If not, "Then why are we making them? Why do we make them?" he asked.

But Trump began publicly speaking about nuclear weapons long before the campaign. He travelled to the former Soviet Union in 1987, during the Cold War, and began floating his idea to join up with the U.S.S.R. on the nuclear front. Speaking with journalist Roy Rosenbaum, Trump opined that a U.S.-Russia partnership could be a nuclear-armed super alliance, capable of intimidating any other country — including an ally like France — from pursuing their own nuclear programs.

Trump's stance towards nuclear weapons has taken on more urgency with his recent public tweets about North Korea, an isolated nation currently believed to be pursuing nuclear weapons. Trump famously labelled Kim "Rocket Man," and Kim returned by dubbing Trump a "dotard." These international slights may sound silly, but they become significantly less so considering Trump has tweeted threats, including a recent one claiming "only one thing" would work against North Korea, that the small country has publicly said it perceives as tantamount to a declaration of war.

Nuclear proliferation will likely only exasperate these tensions, but it seems that might be Trump's preferred foreign policy route.