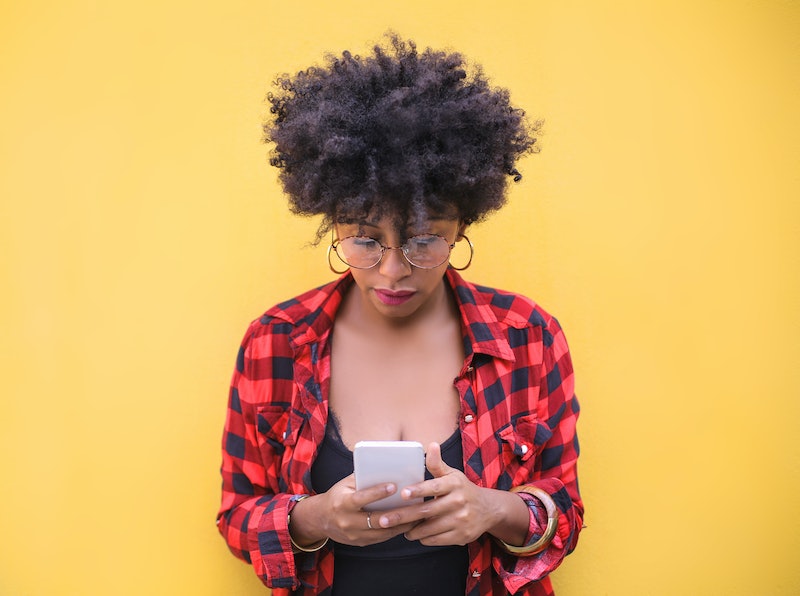 Dating apps are continually rolling out new features, from Super Likes to the ability to swipe on more people per day. Now, you can use Bumble to boost your career with Bumble Bizz, their new feature. Yep, it's all about networking, so the name is apropos. Think a dating app format with a LinkedIn vibe. When you're in your settings and in Bizz mode, you can swipe for networking opps instead of dates. It'll connect you with potential mentors, industry leaders, brands — the sky's the limit, and it's a win-win for swipers on both sides of the new feature and can revolutionize the way you network. And, TBH, the more networking, the better, right? There's honestly no such thing as ~too much networking~. Not to mention, networking through an app is an introvert's networking dream come true.

"This is a huge day for the entire team, as we've all been working so hard towards not only the launch of Bizz, but our evolution into a global social networking brand driven to connect you to amazing people to add to your hive," Whitney Wolfe Herd, Founder and CEO of Bumble, stated in a press release. "Love, friendship, networking — these are all critical connections and the foundation of a healthy, happy life. We want to bring you closer to all of these connections, in an empowered way."

According to the press release, Bumble hopes Bumble Bizz will emphasize "opportunity over job hunting," and "will be the first to bring the 'swiping' and 'women first' experience to professional connecting." YES, please. A user's Bumble Bizz profile will include a digital resume, as well as a skills section, and users can also add examples of their work. Plus, Bumble Bizz will have a photo verification tool, so you won't have to worry about people misrepresenting themselves.

Here Is An Example Of A Profile

And You Can Keep Swiping To See More Info

If You Both Like What You See, Networking-Wise, And You Want To Connect, You Will Match

Looks simple, right? And just think — your new job can be just a swipe away.

So far, some amazing women have supported Bumble Bizz's launch, including Priyanka Chopra, Kate Hudson, Karlie Kloss, Laura Brown, Payal Kadakia, and Alli Webb. Not only will they take part in a launch event later this month in NYC, but they'll also participate in an upcoming content series. Plus, these women will also ~be on Bumble Bizz~, connecting with and mentoring users.

And Bumble also just announced another perk to using the app, which they launched in-app — that they'll be giving away $50,000 in new business grants to entrepreneurs who meet on Bumble Bizz. The five winning teams can earn:

Entering is easy. You do so through Bumble Bizz, and application requirements include: background of the founding team (which must include at least one woman), a description of the social good outcome that your new product will drive, and a business plan. But hurry up and brainstorm, because submissions will only be accepted through Oct. 31.

"We've stayed focused on creating a community with a foundation built upon positivity, respect, confidence, and encouraging women to make the first move," Wolfe said. "We now do this across all facets of their lives. The response has been very positive." I can imagine! All in all, this is definitely an app feature I'd be into, and I'm sure many other Bumble users will be, too.

Bumble Bizz is currently live in the U.S., Canada, the United Kingdom, France, and Germany, and will be available globally soon. You can find it on iOS, and it will be coming to Androids on Oct. 18.