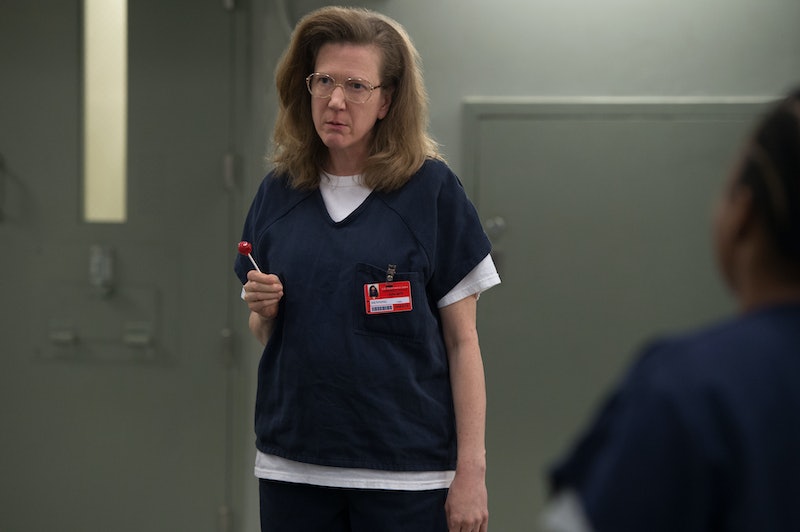 Part of the appeal of Orange Is The New Black is that it plays with the idea that there are "good" and "bad" people, but Season 6 introduces two villains with a shocking streak of cruelty. Carol and Barb's backstory on OITNB Season 6 spans decades, and seems to be the foundation of the ongoing rivalry between C-block and D-block that defines the season. The backstory of Carol and Barb Denning, played by Henny Russell and Mackenzie Phillips respectively, is explored multiple time throughout the season, and involves bloodshed, a drowning, and a disagreement about which of the two has the right to share a mildly amusing anecdote about the glass of ice. Spoilers ahead for Season 6 of Orange Is The New Black.

The first indication that Carol and Barb are not forces to be reckoned with comes in Episode 3 of Season 6, which features flashbacks to Frieda's time in the Litchfield Maximum Security Prison before she was transferred to the minimum security "camp" where the show spent its first five seasons. Carol and Barb both run their own drug-running empires inside of the prison, but Frieda manages to rat them both out, resulting in them getting time in the prison and in Frieda getting sent to minimum in return for her cooperation. However, the competing drug trades are actually pretty tame crimes in comparison to what put Carol and Barb in prison together.

In Episode 10 of Season 6, the backstory of the Denning sisters is revealed in full and it is arguably the series' darkest backstory ever, at least in my opinion. While most inmates on Orange Is The New Black ended up turning to crime for money, through accident, or through one in-the-moment mistake, the Denning sisters orchestrate and execute the murder of their younger sister – for seemingly no reason at all. They seem to be upset that their younger sister is the reason the Denning family is moving to Florida because of her gymnastics training, but the fact that they jumped right to "murder" as opposed to say, oh, I don't know, anything else, indicates that these two were always going to push things too far.

Their flashback shows the two driving out to a small pond in the woods on a cold winter night so that their younger sister can return her tadpoles to the water. (Don't ask.) Barb brings their younger sister out of the car so that Carol can alter the car to prevent any doors from being opened from the inside. Then, Carol brandishes and ax and chases their sister back into the car, trapping her, and Barb and Carol slowly push their younger sister into the icy pond. Orange Is The New Black has had some shocking backstories, but the pre-meditated murder of a child, let alone a sister, is new territory for the show.

While this crime is likely what put the two in prison, their separation didn't come from any kind of disagreement over whether or not killing their sister was a bad thing, but over who had the right to tell a certain anecdote. While sharing stories in Litchfield one day, one of the sisters tells a story about a humorous mix-up of someone asking for a "glass of ice" and the sister bringing them the classifieds from the newspaper back in their waitressing days.

The other sister disputes this, claiming that that happened to them, and that their sister had no right to tell that story – which resulted in a decades-long turf war between C-block and D-block. Really, it's the kind of fight sisters everywhere might have, just that the consequences were so much graver.

Of course, in the final episode of the season, it's revealed that the story didn't happen to either of them, but instead a waitress they both worked with who told the story to the Dennings during their shift. It's mind-boggling — much like everything else about the powerful, cruel, and petty Denning Sisters.