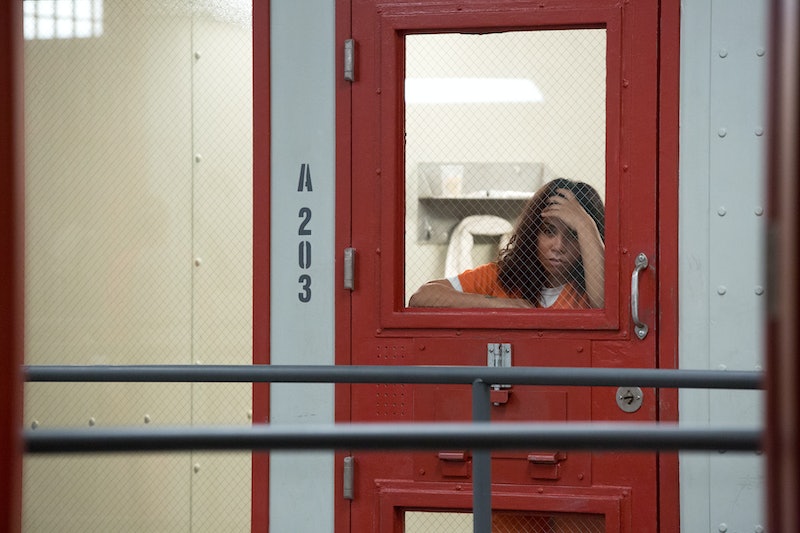 The last time viewers saw the women of Litchfield Penitentiary, most of them were being loaded into vans and carted to an unknown destination after a Correctional Emergency Response Team (CERT) stormed the prison in response to a three-day riot that took the life of one CO and left MCC (the private prison management company over Litchfield) in the middle of a sociopolitical nightmare. Ten inmates — Red, Blanca, Cindy, Taystee, Suzanne, Nicky, Piper, Alex, Frieda, and Gloria — remained hidden within their indoor pool bunker, awaiting the CERT and their fates. And finally, this Orange Is The New Black Season 6 trailer reveals that they made it out alive, but viewers will have to wait until the season premiere to find out how.

Actually, it appears that all but one inmate made it out — or at least to their joint destination, which seems to be a federal prison, by the looks of their new mugshot letter boards that read "FEDERAL DEPT OF CORRECTIONS." The missing link? None other than Alex Vause. Her intermittent disappearance seems to be a trend on the show. But she's definitely not in their new home in the beginning of the season, at least, because the question, "Where's Alex?" can be heard in the background of the trailer.

A few new faces make their debuts along with the Litchfield ladies' new home. Suzanne seems unsettled by it ("This isn't home. This is NOT home!"), and so does Lorne ("It's very different here ... my bunkie? She does four poops a day."). And it becomes apparent pretty quickly that the women have been categorized into new groups by the colors of their jumpsuits. Suzanne is in pink, Piper is in blue, and Taystee and Cindy are in beige. The trailer doesn't directly explain their color coded uniforms, but prisons are known to use the technique as a system to categorize inmates into various risk levels and potential behaviors.

While it's unclear exactly what the colors mean, it could be the reason Suzanne's friends reject her, and it looks like she turns to Piper for solace. "Blues and khakis have beef with each other," Piper tells her. "Pinks are safe out there." Suzanne still finds it difficult to cope, saying adult female friendships are "SO complicated." Multiple shots of chanting and near-brawls between the blues and khakis are sprinkled throughout the two-minute clip.

Meanwhile, there's definitely an ongoing investigation being undertaken by law enforcement in attempt to uncover who started the Litchfield riots. Many of the women involved are interrogated and it doesn't seem like anyone wants to budge. One shot of an officer scratching his head before an investigation map displays three columns titled "MURDER," "CHARGES," and "RIOT LEADERS" that hold photos of Litchfield inmates. Daya, Cindy, and Frieda's faces are under the "MURDER' column, and Blanca, Gloria, and Nicky fall under "RIOT LEADERS."

Oh, and remember Linda? The MCC buyer and old flame to Caputo? She's still playing inmate after trying to blend in during the riots and Caputo, out of revenge, telling the CERT she was a recent transfer from the psych ward. In the new trailer, she's shown getting her head shaved, traumatically, before other inmates who are all dressed in blue smocks.

It's an intense couple of minutes, to say the least. But thankfully, that intensity is slightly balanced by some comic relief from CO and Litchfield resident electrician, Joel Luschek, as he leads some of the inmates in what looks like a Zumba or cardio dance class gone wrong.

It looks like Season 6 is where the women of Litchfield will show their true colors, literally and figuratively. What does that mean exactly? Only time will tell.