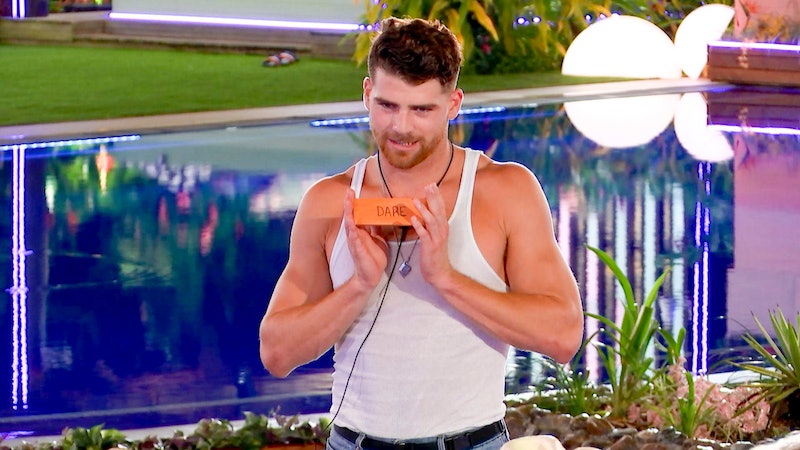 Can Love Island get any more brutal after last week? It feels like the tearful goodbyes just kept on coming. No sooner had Cashel and Katrina coupled up in single solidarity than they learned that second (or third) chances weren't coming after all, and they got dumped. Luckily, after Love Island Cashel seems to be doing just fine and keeping his positive attitude up.

While drama surrounded Cashel for most of his stay on Love Island, don't worry about him on the outside. According to his Instagram, he's back in California and taking a vacation from his vacation.

Here's what the OG Islander had to say to everybody now that he's on the outside, in an Instagram post on Sunday:

"I’m back stateside y’all! It was tough leaving my new friends in the villa but I do love hangin on the beaches of Southern California! Getting my phone back has been a trip. I can’t believe all the love coming through. I’m so grateful to all of the viewers, supporters, haters, lovers, islanders, producers, [the show, host Arielle Vandenberg, narrator Matthew Hoffman], my friends, my family, Mother Ocean, Mother Nature, the Sphinx, [Tina Fey], my celebrity crush; my Fordham Ramily, my peoples in Sacramento, the amazing people of Fiji and the Bula Spirit, [the band Spoon] and [Lucinda Williams] who’s music was constantly playing in my head (I love your guys’ music so much and it kept me going in there as it does everyday), all my new followers and all my old followers (I cant believe y’all are following me) thank you for the support and love. It’s all love coming from me. Peace and love to all. I’m around, holler at me 🤙🏼"

This is the photo that accompanied the veritable novel above:

On Sunday, he also posted some stories of him dancing in the car while driving on the on the way to the beach now that he's home. Suffice to say, he's doing OK. (The screenshot below looks kind of aggressive, but he's singing along to the Beatles and living his best life... promise!)

According to his bio, he's got modeling agencies in multiple cities across America. Surely he'll be back to work soon enough. For now, take a break! It's been a stressful couple of weeks at the villa.

Before Cashel's phone was returned to him, the show also posted this cute lil' highlight reel of some of his sillier moments, if you wanna reminisce:

Will Kyra regret choosing Eric over Cashel, now that Cashel has been dumped? Probably a little, but their relationship was rocky and confusing for both of them from the start. Kyra went back and forth with how she felt, but still handled flirting with Eric while still in a couple way better than Cashel handled his almost-situation with Christen. It was never a perfect pairing, and everything happens so fast on Love Island. Now that Cashel is home, he seems to be moving on and in a healthier place. Hopefully, with time, Kyra will see that everything worked out for the best and for a reason.

It stinks that Cashel (and Katrina for that matter) didn't get another chance to connect with newcomers and find that special Love Island someone. But that's the way it goes. Onto the next!