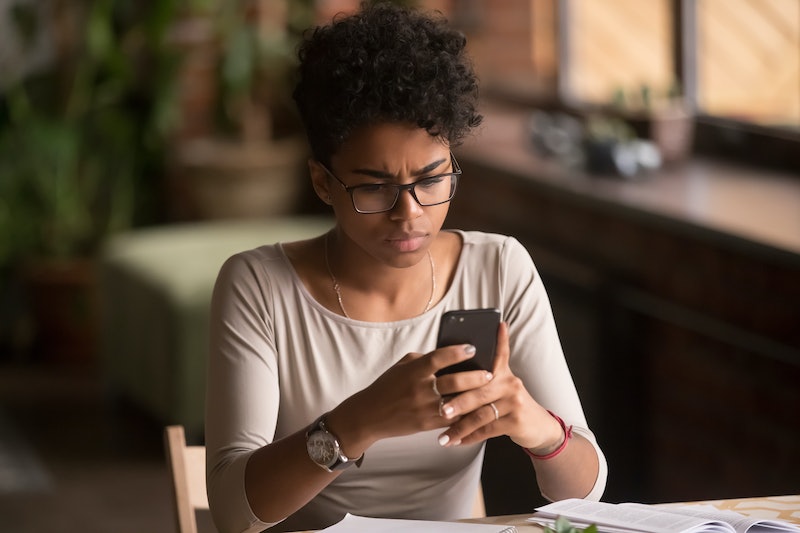 To ghost or not to ghost, that is one of the questions. The other one, of course, being, why the hell did that person I was sort of dating disappear like a full size Reese's in a Trick or Treat bucket? Ghosting is a reality of dating in the age of smart phones and DM's, unfortunately, and it can really send your mind on a tailspin. Sometimes it's necessary (the person you ghost is a creep) and sometimes it's just rude (you were talking a lot, you went on some nice dates, then you just totally stop responding with no explanation.) Since the wild west of internet dating seems to only be getting wilder, know that there is a more polite way to ghost then just dropping off the face of Earth/phonescape. It's called Caspering, in homage to everyone's favorite, good-natured cartoon ghost. For the most part, it just has to do with kindly communicating where you're at — which is a good practice for everyone.

"People ghost for reasons of fear, anxiety, fear of hurting someone, fear of conflict, fear that they will succumb to "pressure" and say yes to another date that they do not want. [Perhaps] they can't be bothered, or they are narcissistic and don't care, or they don't think it matters because they don't really know the person. It can be any of these reasons," Dr. Ramani Durvasula, psychologist and professor of psychology at California State University, Los Angeles, tells Bustle. Although someone else's disinterest might sting, try not to take it personally if it happens to you. But it does go to show that it's important to take people's feelings into account, even in these casual encounters.

The etiquette of a friendly ghosting comes down to courtesy and ownership, Durvasula says.

"In the fear of 'offending' or hurting someone, people are instead choosing to confuse them. I'm not sure what's worse," Durvasula says. "If you are going to ghost in a friendly manner, the best way to do that is to simply say one last time, 'It was good to meet you. Hope life treats you well,' or something like that. Make sure it has a finality to it and does not invite further engagement."

And in this age where so much communication happens online, if you have met someone in person, be brave and actually say something that tells the person you are no longer interested in pursuing something, Durvasula says. Wish them well!

You can be kind while you say how you feel. While there are, again, many different reasons one might ghost, most of the time it has something to do with the fact that you just aren't feeling it, or you aren't ready for anything particularly steady. All good. Just let a cat know! It doesn't have to be a diary entry, just a statement of clarity.

"It is important to realize we have all been on both sides of being rejecting or rejecting someone else. With this in mind tailor your approach to how you would like to be treated," psychotherapist Becky Paulits, LCSW, tells Bustle. Paulits says there are a couple of things you can do to soften the process.

"If you do not want to keep in contact with someone start lengthening your response time to them so their minds start to question your interest and begin to process the fact that you may not be interested," Paulits says. "Then simply let them you are not interested in them romantically but appreciate the time you spent together. Wishing them the best of luck on their dating journey will signify the end of communication." From then on, if you don't want to keep in contact, do not respond in the future.

Being respectful, honest, and clear is the way to go. (That being said, if someone is being creepy or makes you feel unsafe in any way, ghosting is A-OK, no questions asked.)

"We don't owe anyone anything, technically, although, I would agree that as long as the person you're dating hasn't shown themselves to be abusive or threatening in any way, it's polite to let them know you're no longer interested in dating them or having any sort of interaction with them," Stemen says. You can say that in some form that feels authentic to you.

"The extent to which you elaborate on reasons depends upon how deep of a relationship you've developed with someone, but if you aren't in a serious relationship with them simply telling them you'd no longer like to date is enough," Stemen says. After that, you don't have to respond. They aren't respecting your boundaries at that point and you don't have to have anyone in our life that you don't feel adds value to it.

The moral of it all? Just try to be as nice and straightforward as possible. The more we practice it, the more we receive it!

More like this
Is It A Rebound Relationship Or The Real Thing?
By Carolyn Steber and Lexi Inks
Are Quality Time & Physical Touch Love Languages Compatible?
By Lexi Inks
12 Ways You're Sabotaging Your Love Life
By Teresa Newsome and Lexi Inks
The Best Time To Date After A Breakup, According To Experts
By Bustle Editors
Get Even More From Bustle — Sign Up For The Newsletter