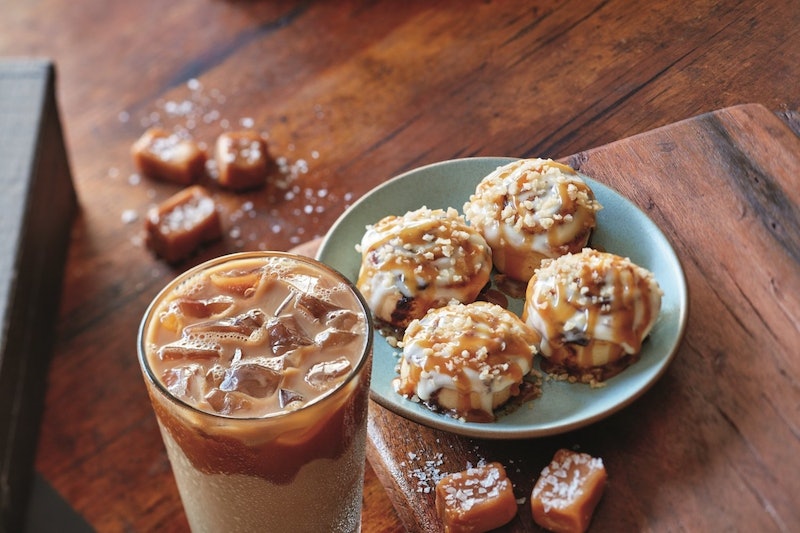 Cinnabon holds a special place in our noses and hearts. The scent of baked cinnamon and sugar is so endearing and unforgettable, it's probably you'll find a Cinnabon near the front entrance of most shopping malls — so it'll be the first thing you smell when you walk inside. Of course, the sweets chain is most well-known for its cinnamon buns; the gooey, heavenly, pastries that are so delicious, there are candles named after them. But now, the chain is branching out — into coffee. That's right, you'll want to know what Cinnabon's Cinnamon Roll Cold Brew Coffee is, because it's about to sweeten up your morning for good. Especially if you're the kind of person who stays away from cold brew because it's just too bitter for you.

Lots of non-coffee centric chain restaurants have introduced artisanal coffee flavors to their menu — McDonalds, Burger King, 7-Eleven, and Panera Bread, to name a few — but because Cinnabon specializes in sweets, I'm just a tad bit more eager to try out their take on cold brew. I'm definitely one of those coffee drinkers that needs coffee in my veins to function, but doesn't exactly love the taste of unsweetened brew. And cold brew is more concentrated than hot brewed coffee, so the bitterness is even more intense. So, yes, I guess you could say that I'm pretty flippin' amped about a cinnamon roll-flavored cold brew.

According to Cinnabon, the new Cinnamon Roll Cold Brew is flavored with a sweet cinnamon, duh, and a creamy swirl of cream-cheese frosting — because what's a cinnamon roll with out cream cheese frosting?! This combination is like a liquid cinnamon bun, which I think is the most idea cold brew coffee drink I could dream of. And, if you're really craving sweetness, you can add a caramel drizzle or toffee crunch sprinkles.

Of course, if you're not interested in washing down your cinnamon roll with a cinnamon roll drink, there are other options. Oh yes, Cinnabon is introducing not one, but three new cold brew flavors. Rejoice! You'll never have another boring or bitter cold brew again! All of your mornings will be filled with absolute sweetness. So if you want some variety within your order, you can opt for a Salted Caramel Cold Brew — it's sweet, buttery but just the perfect amount salty— or a Vanilla Cold Brew — it's a classic — both equally as sweet, but hitting totally different notes on the flavor charts.

All of the new Cinnabon Cold Brew Iced Coffees are officially now available in 16-ounce (for moderate sleepiness) and 24-ounce sizes (for those mornings when you literally cannot wake up for hours and think you're still dreaming while you're at work) for $2.99 and $3.39, respectively. So if you're looking for a new start-of-spring drink to shake up your morning routine (and wake up your morning routine, I guess), this is going to be your sweet sweet salvation. And if you want to add those extra sweet toppings — because really how sweet is ever really too sweet? — you can do so for an extra $0.50 — not a bad use of your spare pocket change, amirite?

Next time you head to the mall, I dare you not to zombie walk straight into Cinnabon to get your hands on not only a cinnamon roll, but a cold brew to wash it down with. Just because you now know the inner workings of mall psychology doesn't mean you'll be able to avoid it. We are all chained to the smell of warm bread, sugar and cinnamon.