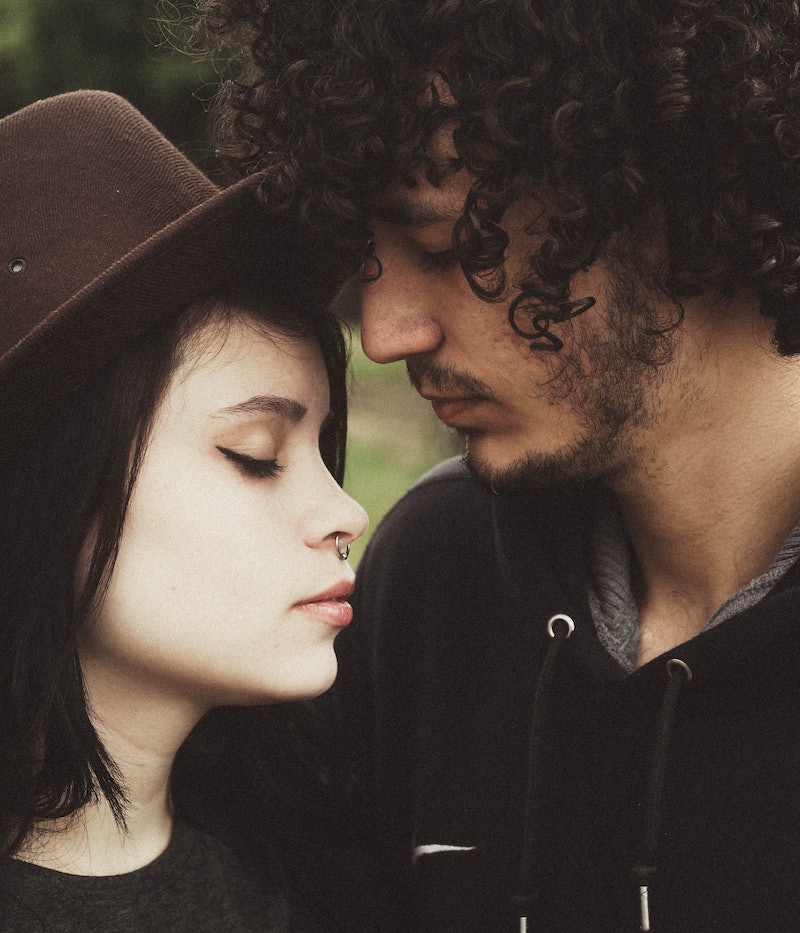 Sometimes, when I'm out with my partner, I believe people will be surprised to see us together. That's because I think of him as more attractive, more likable, and generally more desirable than me. In other words, I have a case of dating imposter syndrome.

Imposter syndrome is when you feel like an imposter for getting something you've actually earned. You often hear about it in professional contexts, where people don't feel they deserve their jobs no matter how educated and experienced they are. But it can totally show up in relationships, too, certified counselor and relationship expert David Bennett tells Bustle. People often believe they're less attractive, less successful, and even less moral than partners they're actually perfect for.

"I have a client who, despite the external evidence that she is drop dead gorgeous, believes herself to be a fraud who does not deserve the men she always attracts," Celebrity Matchmaker and Relationship Expert Bonnie Winston tells Bustle. "She once remarked that a man I fixed her up with must be 'vision impaired' to have been attracted to her and liked her. She also said it was 'just good timing.'"

Not even celebrities are immune. "To be quite honest, I didn't think I was his type," Jenny Slate told New York Magazine about her relationship with Chris Evans. "Eventually, when it was like, 'Oh, you have these feelings for me?', I was looking around like, 'Is this a prank?'"

If this sounds like, you, here's how to deal with your own imposter syndrome.

One sign Bennett sees in people with dating imposter syndrome is that they're thinking of ending their relationship — not because it's going badly, but because it seems "too good." They feel like since it's too good to be true, it's going to end anyway, so they'd might as well end it now. Their partner's eventually going to figure out they're too good for them, they figure, so it's better to call things off before getting too attached.

Other signs include playing "hard to get," dating people who are wrong for you, and sabotaging relationships, psychologist Erika Martinez, Psy.D. tells Bustle. These are all defense mechanisms to avoid being rejected, because you secretly think you will be.

But the #1 sign you have imposter syndrome is that you're wondering why your partner even likes you. There was a reason your partner chose you, so if you're having these thoughts, you're probably not perceiving yourself accurately.

Understand These Feelings Are Normal

People with imposter syndrome tend to beat themselves up over everything, including their imposter syndrome, Sarah Epstein, author of Love in the Time of Medical School and Marriage and Family Therapy intern at the Council for Relationships, tells Bustle. But there's no reason to beat yourself up over this. "Most of us feel nervous when we get involved in something new," she says. "Confidence comes with time and being with somebody that helps us feel good about ourselves. In the meantime, be gentle with yourself."

People with dating imposter syndrome often engage in irrational thought patterns, says Bennett. One of the most common is believing they can read minds. For example, they might feel like they know their partner's secretly unhappy even if they're not. Or, they might assume their partner's always thinking pure thoughts and is therefore superior to them. Recognizing you can't read anyone's mind can help you understand that the thoughts you're attributing to others may be totally off-base.

Have A Conversation With Your Inner Critic

Epstein calls the voice expressing your imposter syndrome your "inner internet troll." One way to stop believing what this inner critic says is to talk back to it. If it's asking "what could they possibly see in you?", for example, list the things they might, in fact, see in you. If it's saying you don't deserve your partner, think of the reasons why you do.

Work On Your Self-Esteem

At the root of dating imposter syndrome is low self-esteem, says Martinez. If your partner feels like they've majorly scored to be with you and you feel like they've settled, there's a massive gap between how others are perceiving you and how you're perceiving yourself. You can boost your self-esteem by reciting daily affirmations, hanging out with people who appreciate you, and setting small goals and achieving them.

Talk To Your Partner

Since your partner chose to be with you, they can probably reassure you that your perception of them as out of your league is unfounded. In fact, it's possible they actually feel like you're out of they're league.

I realized this when, out of curiosity, I asked my partner if he ever felt like I was too good for him. "Oh sure," he said. "Probably because you look better than me." The same thing I'd always thought about him.

The moral of the story? It's common to feel like you don't deserve your partner, but don't take that feeling as fact. Chances are they're also wondering what they ever did to deserve you.

More like this
6 Dating App Tips To Try If You're Looking For A Serious Relationship
By Lexi Inks
How To Politely Reject Someone Who Keeps Asking You Out
By Laken Howard and Lexi Inks
Are Quality Time & Gift-Receiving Love Languages Compatible?
By Lexi Inks
20 Women Reveal Exactly How Long It Took Them To Get Over Their Ex
By Amanda Chatel and Lexi Inks
Get Even More From Bustle — Sign Up For The Newsletter