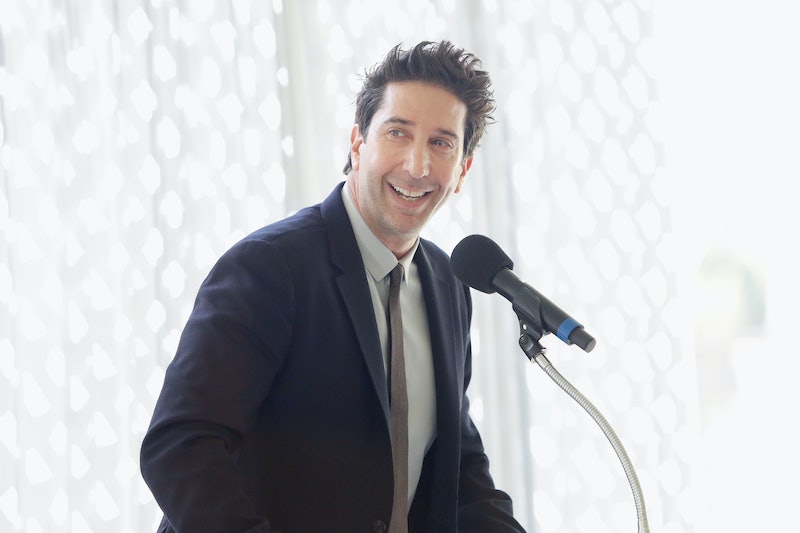 David Schwimmer and telly have been on a break since he last starred in The People VS. OJ Simpson, but he’ll be returning to the small screen soon — and the UK small screen no less. The Friends alum has just signed on for a brand new Sky One comedy called Intelligence, in which he plays an NSA agent tasked with heading up a new cyber-crime unit in Cheltenham. It’s a quite a departure from playing a paleontologist in New York, but I’m still into it. So, what is David Schwimmer’s show Intelligence about? Despite all the trappings of a crime procedural, the show’s actually a workplace comedy more in the vein of The Office and I’m low-key excited.

The news was announced by Deadline, who revealed the show was a six-part series “set in the UK’s Government Communications Headquarters.” Beyond playing an NSA agent described as a “power-hungry maverick”, Schwimmer will also be serving as executive producer on the project. He’ll be starring alongside Nick Mohammed, the other half of the show’s leading duo, who will play “an inept and tactless computer analyst.” I’m getting some serious Hot Fuzz vibes here and I’m 150 percent here for it.

Here's hoping he gets to show off that Unagi he's been working on to take down criminals and kick major butt.

It seems like Schwimmer’s going to be jumping into this project feet first, as he told Deadline, “I have no idea what this show is about but if it’s called Intelligence, naturally I’m going to be part of it.”

If you had any doubt about how good the show is going to be, one of the studios behind it shared a little tidbit about how it’s going to play out. Expectation, a co-producer of the series, and its creative director revealed, “David Schwimmer and Nick Mohammed have a fantastic ‘odd couple’ chemistry and the scripts are brilliantly funny.”

In fact, the scripts are going to be penned by Mohammed himself and you’ve actually seen more of his work than you’ll realise. For example, he's previously starred such as Piglet in Christopher Robin and The Martian. He said working with Schwimmer was “an absolute dream come true” and continued, “He’s collaborative, honest and exquisitely funny and I couldn’t be more delighted and flattered by his involvement.”

This isn’t the first time that Schwimmer’s made a big splash in the UK this year, as you might remember the internet thought they’d spotted him stealing from a corner shop in Blackpool. After the police made an announcement releasing CCTV footage of the thief, people were quick to point out that he looked uncannily like Ross. It actually prompted Schwimmer to release a statement.

He posted a hilarious video to Twitter where he re-enacted the CCTV footage, in another shop in New York if the Yankees sticker in the background is anything to go by. He captioned the video, “Officers, I swear it wasn't me. As you can see, I was in New York. To the hardworking Blackpool Police, good luck with the investigation. #itwasntme”

Mohammed riffed on this in the Intelligence announcement, saying that Schwimmer wasn’t actually his first choice for the part. He said, “We did initially offer the part to the local shoplifter from Blackpool, but he wasn’t available, sadly.”

Well, whoever that local shoplifter was, it sounds like he’s missed out on a pretty cushty role. I reached out to Sky about when the show will be dropping, however they told Bustle that they don’t yet have a release date in place. Fingers crossed it’s in the earlier half of next year because I can’t wait to see it.

Till then though, I’ll just have to make do with yet another Friends binge on Netflix. As far as struggles go, there are worse burdens to bear.