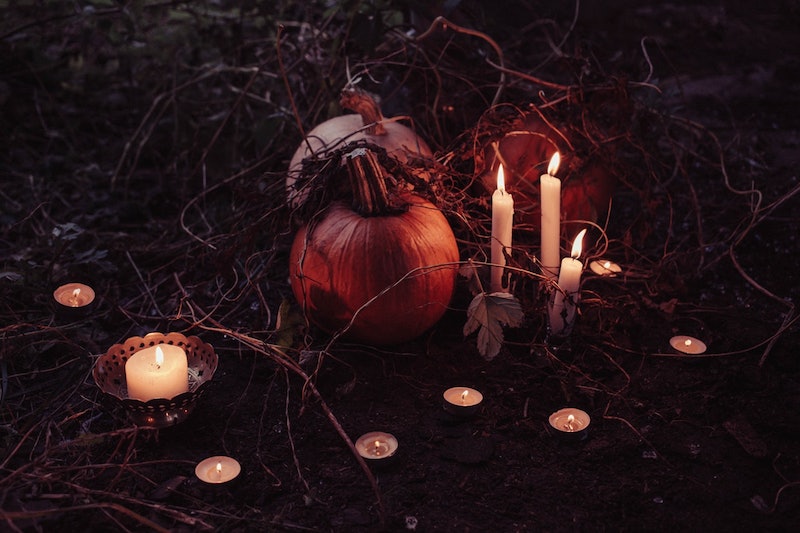 While Halloween is traditionally a night of treats, the night before Halloween — aka, Devil's Night — has historically been known for its tricks. Also known as Mischief Night, the meaning of the night before Halloween has evolved considerably over time, from being associated with helping young women find husbands, to coordinated witch hunts, to protests and vandalism throughout the centuries that increases during times of economic and social strife.

The night is known as "Cabbage Night" in Vermont and New Hampshire, thanks to an old Scottish fortune-telling tradition. "Young girls would pull cabbages to examine them and try to divine who their husband will be," Holiday Calendars noted. "Of course, once the cabbages have told these young ladies all they could, the only thing left to do with them was to throw the cabbages against someone’s door and run away." Sounds a lot like going to your neighbors' house when you were younger and egging or TP-ing them, no?

In a more dangerous iteration of the holiday, Devil's Night got that particular name after anti-police riots in Detroit led to a tradition of setting fire to local buildings and dumpsters year after year, as was detailed in the 1994 movie The Crow. The first fires were set during anti-police brutality riots in the summer of 1967, but over the years, pre-Halloween arson in Detroit became a sinister epidemic in the motor city that had little to do with organized rebellion. Instead, the fires turned into annual acts of vandalism that authorities struggled to control for decades.

While Devil's Night has gained most of its notoriety from years of rampant arson in Detroit, or the annual convening of dead serial killers as depicted in American Horror Story: Hotel, this isn't too far off from how the tradition began. According to the website Holiday Calendars, Mischief Night began in England in the 1700s, and "it was often accompanied by children playing harmless pranks such as stealing or switching shop and road signs and overturning tubs of water."

Some pranks were indeed harmless, but others had lasting, devastating effects for communities. Mischief Night began to gain visibility in the 1930s and '40s because the "tricks" started to make headlines in the U.S. "In 1934, in Connecticut, a 14-year old boy was beaten to death at a Halloween party; same year, an 8-year old Chicago boy, watching a bonfire of stolen gates, was killed by trick-or-treaters. As late as 1964, trick-or-treaters trashed the New York studio of artist Andrew Wyeth," the Chicago Tribune reported.

The Troubled History Of Devil's Night

Though the night before Halloween has been associated mischief and mayhem for centuries, the holiday began to have serious consequences in Detroit during the Civil Rights Movement, according to Mask Magazine and the book Devil's Night and Other True Tales Of Detroit by Detroit native Ze'ev Chafets. The Detroit Riots of 1967 ignited when decades of extreme poverty, racial profiling, and police brutality against African Americans in the city reached an apex. According to History.com, the first fire was set by rioters at 6:30 a.m. on July 23, 1967, after predominately white police raided a black after-hours club that was hosting a party for veterans returning from Vietnam.

"By midmorning, every policeman and fireman in Detroit was called to duty. On 12th Street, officers fought to control the unruly mob. Firemen were attacked as they tried to battle the flames," which resulted in 1,400 buildings eventually being burned during the five-day riot, History.com reported. "The so-called 12th Street Riot was the third-worst riot in U.S. history, occurring during a period of fever-pitch racial strife and numerous race riots across America. Only the New York Draft Riots of 1863 and the Los Angeles Riots of 1992 caused more destruction." After the riot, then President Lyndon Johnson reportedly appointed a National Advisory Commission on Civil Disorders, often known as the Kerner Commission.

The report cited: "What the rioters appeared to be seeking was fuller participation in the social order and the material benefits enjoyed by the majority of American citizens. Rather than rejecting the American system, they were anxious to obtain a place for themselves in it."

While fires set on the night before Halloween in Detroit didn't become commonplace until the 1970s, Mask Magazine reported that the roots of the fires lie in the 1967 riots. "Although 1983 is widely recognized as the official beginning of Devil’s Night because of its dramatic increase in dumpster fires, there is evidence to suggest that there was an already low-level insurgency associated with Halloween dating back to at least 1979 and, conceivably, to 1967 itself," Mask Magazine noted. "It was only in 1984, probably due to a combination of the widespread media hype of the 1983 arsons and the World Series victory by the Detroit Tigers on Oct. 31, that there was a marked increase in building fires."

By 1984, more than 800 fires were reported in Detroit on Devil's Night, and fires set after the initial riot were rooted in acts of vandalism — not acts of rebellion. At the height of the arson, the city created a task force with the goal of reducing the number of fires and vandalism on Devil's Night. Detroit also renamed the night before Halloween Angel's Night to change the perception of the holiday.

These coordinated efforts between citizens and law enforcement have significantly reduced violence and vandalism leading up to Halloween in Detroit. "The days of over 800 fires over the Halloween weekend are long behind us," Mayor Mike Duggan said in 2016, according to the news site M Live. "It was a typical night in the city. It wasn't any higher that what you normally would have."

While the arson in Detroit is the most well-known modern-day form of destruction associated with the night before Halloween, vandalism and violence have been rampant on Mischief Night for centuries, and the violence always seemed to increase during economic unrest. Additionally, Halloween itself reportedly began to be associated with witches in 1590 after the North Berwick Witch Trials, which may have led to the deaths as as many as 4,000 people, began in Scotland.

"James VI was traveling to Denmark to collect his new bride Anne of Denmark in 1589. During the crossing the storms were so severe that he was forced to turn back. James became convinced that this was the work of witches from North Berwick, intent on his ruin," Historic UK noted. "There was talk at the time that one of them had sailed into the Firth of Forth on a sieve to summon the storm, thus dually proving her guilt as not only a witch, but also as a would-be regicide [a person responsible for the killing of a person of royalty]."

Dozens of other uprisings or persecutions are cited as occurring around Halloween over a several hundred year period, eventually leading to the holiday being recast as a night for treats versus tricks during the 1930s. "Whatever its specific sources, inspirations, or influences,” David J. Skal, said in his book Death Makes a Holiday: A Cultural History of Halloween, that trick-of-treating “became widely known and adopted as a distinct property protection strategy during the late Depression.”

Aside from turning Halloween and the nights leading up to it into a time of fun and treats, the late activist, and Detroit native, Grace Lee Boggs penned the book The Next American Revolution when she was 99 years old to explore how hope and creativity can overcome urban despair and decay, which have historically been at the root of vandalism and unrest around Halloween, as the Chicago Tribune reported.

"It was only when other concerned Detroiters began re-spiriting and rebuilding Detroit with community gardens and peace zones that hope emerged and with it the revolutionary/solutionary movement ... which is increasingly being recognized by people around the country and the world," she wrote on the James and Grace Lee Boggs Center to Nurture Community Leadership's blog. Boggs' argument that peaceful dialogues among people invested in their community is the philosophy that's ultimately made Angel's Night a success in Detroit despite the city suffering one of the worst economic downturns in modern history.

Mischief Night As An Act Of Peaceful Resistance

Boggs claimed that a peaceful approach to engaging in a dialogue with others is the most productive way to spearhead positive, lasting change. And, according to the Outstanding Woman of Peace Award website, women play a vital role in this process. "The positive role women continue to play in bringing about positive change in the society cannot be overemphasized," the award's website noted.

In the spirit of reclaiming Devil's Night, or Mischief Night, as a call to action, consider a commitment to making progress toward positive change through peaceful resistance. The night before Halloween is an ideal time to gather your friends and figure out what your resistance will look like the rest of the year. Host a letter-writing night, or call your senators — with access to healthcare at risk, the silence around systematic sexual harassment and assault finally beginning to shatter in the wake of the Harvey Weinstein allegations, LGBTQ rights under attack, and the fight for equal rights for everyone ongoing, there's a lot of work to do for the resistance.

In honor of the fires no longer burning as an act of violence, you can light a candle or make a fire in your fireplace, or outdoor fire pit, and practice meditation — like this Lady Gaga meditation for peace, or read some resistance poetry to honor all the work that has already been done, and the fight that lies ahead. While it might be fun to toilet paper the neighbor's house, the night before Halloween is also an ideal time to harness our collective energy and direct it toward productive action and positive change.