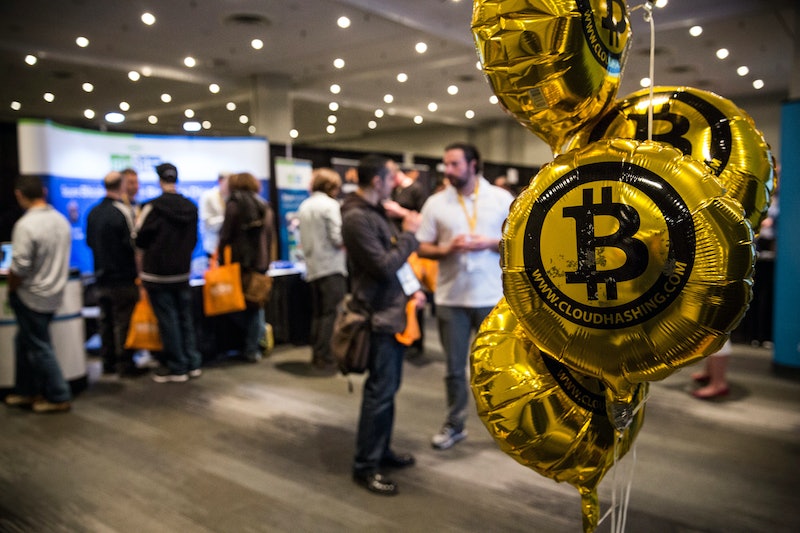 You've probably heard of Bitcoin by now — the peer-to-peer payment method powered by users, with no central authority or middlemen (like a bank or PayPal). There's a new hotshot in town, though, giving Bitcoin a run for its money: What is Ethereum, and why should you be paying attention to it?

Like Bitcoin, Ethereum is a digital currency that you can use to pay for things online, trade money, and buy and sell anyplace that accepts it. The cryptocurrency been sneakily creeping up on Bitcoin while no one was really looking. In fact, it's currently getting nearly as much business, although it's not as big in terms of its monetary value as Bitcoin (which had a value higher than gold at one point this year). Ethereum is similar in nature, but a bit more complicated.

While Bitcoin might be more widely known, Ethereum is unique in its own right. It runs on something called a smart contract; and long story short, it uses an "if:then" system, meaning that Ethereum can be traded only if a certain condition is met. This smart contract is something Bitcoin doesn't use. This means that, for example, you could use it to place a bet on a sporting event like the Super Bowl, and set it to pay if a certain team wins.

Another cool application, as Mashable and the HuffPost point out? Crowdfunding. Platforms like Kickstarter and GoFundMe charge fees; with Ethereum, you could use it so that your money is taken only if a project's goal is reached, without fees.

In other words, Ethereum could replace a lot, and its potential is huge. And while it isn't the only alternative to Bitcoin, other cryptocurrencies don't really give users much of a reason to switch over — until Ethereum came along. The new currency is making things possible that previously weren't even imaginable.

Notable is what Ethereum would mean for the control we have: it would return to us the control we used to be able to exercise over our own information, and combine it with the easy-to-access quality we're used to our information having today. Currently, apps rely on the company or a third-party service to store all of your information — credit card numbers, personal data, etc. Heck, even your choice of apps is controlled by third parties, who decide what you can and cannot download.

Now, imagine these servers being replaced by something that lets you offer and purchase services and keep control of your data. That's Ethereum.

As with most things in life, there are risks. If something bad were to happen with Ethereum's smart contract, the consequences could be catastrophic. Money could disappear and there'd be no way to get it back. But the likelihood of that happening? Not very high. There's also the erratic value to consider: for instance, in March, the price of Ethereum doubled and has been jumping around since.

If it sounds complicated, that's because it is. Regardless, keep your eyes and ears open, because a new cryptocurrency is making a name for itself.