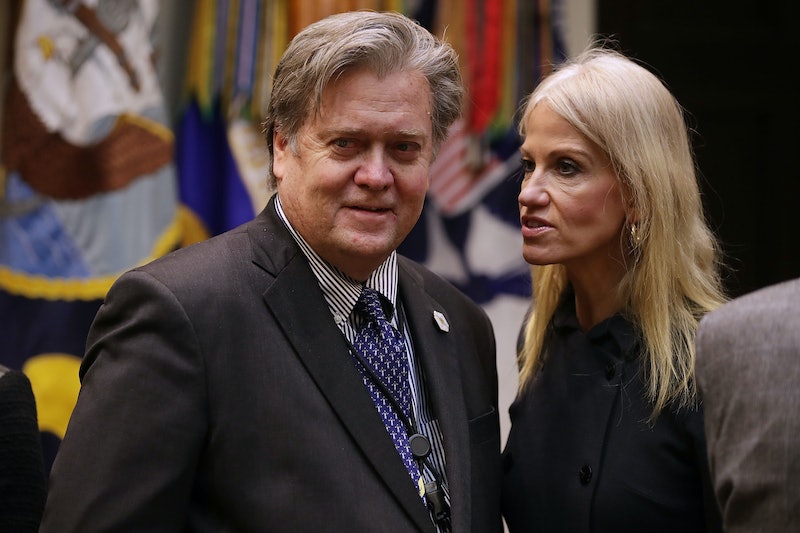 For the executive branch, ethics rules exist to ensure that the integrity of White House officials isn't compromised by conflicts of interest. But President Trump's administration's move to issue ethics waivers to Steve Bannon, Kellyanne Conway, Reince Priebus — some of the closest members in his inner circle — and other White House officials has raised red flags.

The Office of Government Ethics (OGE) prohibits members of the executive branch from working with previous colleagues or clients who might benefit from their nearness to White House authority. It's a recognition of the unique power wielded by those who work in close proximity to the presidency and its outsized influence on government regulation. However, the White House can choose to issue an ethics waiver, which unburdens administration officials from these constraints. Which means that right now, Bannon is free to communicate with Breitbart, the alt-right news website he formerly ran. Conway can correspond with people she used to work with through her polling firm. And White House Chief of Staff Priebus can talk with his old colleagues at the Republican National Committee (RNC), the GOP's official party organizing and platform-deciding body.

And if that sounds like a potential minefield of conflicts of interest, the reason is simple: It is.

Consider that, as former chairman of the RNC, Priebus played a critical role running the Republican primary process throughout 2015 and 2016. By keeping up communication with his previous employer, Priebus can stay abreast of how money gets spent on Republican races in the coming midterm — and potentially influence how much funding goes to certain candidates, particularly those who are (or are not) vocally supportive of his current boss.

Or Bannon, whose influence on Breitbart remains strong. As the chief media outlet catered to the alt-right, the website has enormous sway over much of Trump's most rowdy supporters. And as chief counsel, Bannon has been give free rein by the administration to interact however he sees fit with Breitbart — which could include nudging writers to put a positive spin on news coming out of the White House.

Just as worrisome are the ethics waivers granted to former lobbyists. Trump promised to "drain the swamp" during the final weeks of his campaign, but he seems to be doing the opposite. While running for office, Trump had echoed concerns about corruption between Washington, D.C. politicians and Wall Street money interests. At the time, he laid out detailed guidelines that redefined "lobbyist" to force anyone spending any time at all lobbying to disclose that work. Trump's plan also pledged to ban government officials from leaving public service to immediately join a lobbying firm, as well as sought to impose a lifetime ban on lobbyists for foreign governments joining the government.

In the early days of his administration, Trump signed an ethics executive order that largely mirrored the guidelines set out by President Obama, including a reverse "revolving door" policy that barred former lobbyists from then becoming administration officials and advisers for the industries they had previously represented.

But in a drastic turnaround, it seems those guidelines aren't being applied. Three former lobbyists — Michael Catanzaro, Shahira Knight, and Andrew Olmem — were issued ethics waivers to allow them key White House roles in guiding policy. To take just one case, Catanzaro, who lobbied on behalf of energy industry clients, now “may participate in broad policy matters and particular matters of general applicability relating to the Clean Power Plan.”

The White House reportedly fought the release of ethics waiver information initially, before bowing to the OGE's requests for such details. Compared to the previous administration, Trump looks set to clear far more government officials of ethics constraints. Obama did issue 17 waivers as well, but that spanned the course of his full eight years in office. Trump is just over four months into his first term.

Ethics waivers raise serious questions about the integrity of administration officials. The point of ethics guidelines in the first place is to prevent corruption both blatant and covert from infiltrating the executive branch. With so many members of Trump's closest circle now operating freely and without checks, it seems "drain the swamp" has been abandoned altogether.