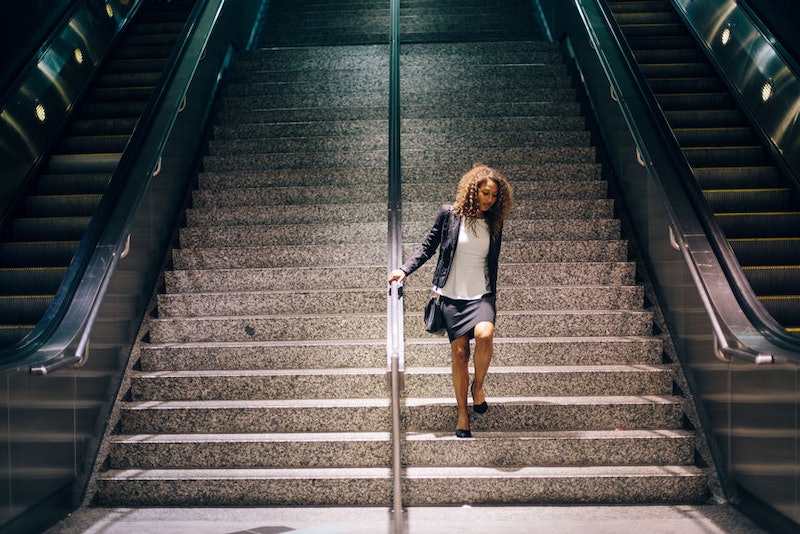 It's all too rare that the words "exercise" and "snacking" appear in close proximity (unless accompanied by an unacceptable snack suggestion, like "a handful of raisins"). But according to a new study, the new buzzword could be the secret to improving your heart health — so what exactly is exercise snacking, and how does one go about it?

To snack on exercise is to do several short periods of exercise throughout the day, as the Independent explains, which could include taking a brisk walk or foregoing the lift in favour of the stairs. You've probably heard about the benefits of interval training — but exercise snacking doesn't even require a pair of yoga pants or a heavy dose of deodorant.

Stair climbing in particular was the focus of a recent study by researchers from McMaster University and the University of British Columbia's Okanagan Campus in Canada. The study, published in the journal Applied Physiology, Nutrition and Metabolism, looked into the impact of a few minutes of "vigorous" stair climbing three times a day on cardiovascular health — and the results were surprisingly encouraging.

The researchers asked a group of typically sedentary young adults to take up an exercise snacking routine, climbing a three-flight stairwell three times a day with one to four hours of rest in between. They performed the routine three days a week over a six week period; the researchers monitored their cardiorespiratory fitness by measuring their peak oxygen uptake. For comparison, the study authors also monitored a control group who did not follow the stair climbing regime.

The results came as a surprise even to the study authors. The stair climbing routine didn't just improve the cardiorespiratory fitness of the participants, but also boosted their strength. They also generated more power in a cycling test. "We know that sprint interval training works, but we were a bit surprised to see that the stair snacking approach was also effective," said Jonathan Little, an assistant professor at UBC Okanagan's School of Health and Exercise Sciences and a co-author of the study.

So what does the study indicate? Essentially, an expensive gym membership and a gruelling workout routine aren't necessary to boost your heart health, and a crowded work schedule needn't compromise your fitness either. Taking a few flights of stairs a day, if you're able to do so, could be the budget-friendly, time-saving answer. Senior study author Martin Gibala, a kinesiology professor at McMaster University, explained, "The findings make it even easier for people to incorporate 'exercise snacks' into their day."

Gibala added, "Those who work in office towers or live in apartment buildings can vigorously climb a few flights of stairs in the morning, at lunch, and in the evening and know they are getting an effective workout." Hear that? Heart health needn't be the exclusive domain of the 6 a.m. exercise class attendees, the marathon runners, and those who forego the bus for the bike. Just bid farewell to the office elevator, and get more acquainted with the stairs.