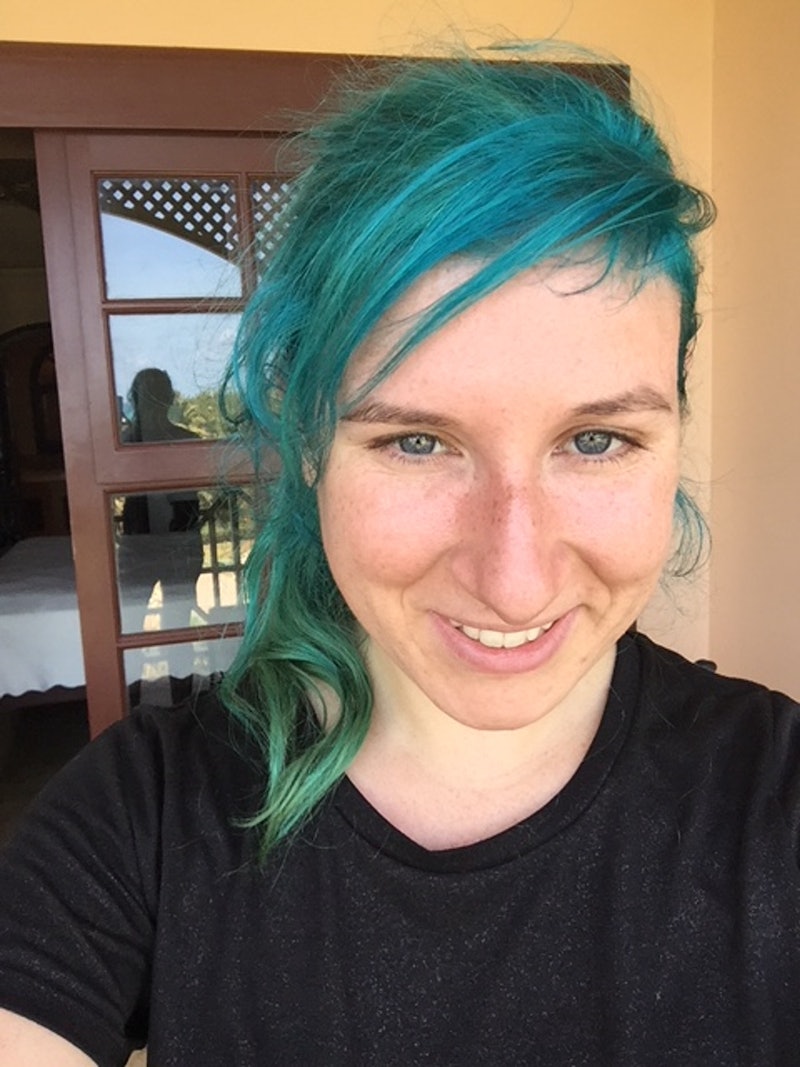 A few weeks ago, I got a call from Alicia Davon, Business Manager and Teacher at Erwan Davon Teachings, who wanted to tell me about a practice called "extended orgasm." She and her husband Erwan Davon, the company's Founder and Senior Teacher, claimed they teach women’s partners a technique to make them come for minutes on end. I know: It sounded too good to be true. But on the off-chance that it was real, I had to know what it was like. So, when Alicia invited me to attend a demo with my partner and then get personalized coaching, I figured I’d investigate this practice myself. It couldn't hurt, right?

When we arrived at the apartment where the session was held (the photos below are from other Erwan Davon Teachings sessions), about a dozen people greeted us. They were part of the Erwan Davon Teachings' Mastery of Relationship class, which I soon learned was about more than just sex. The evening began with people taking turns talking about their relationship issues as Erwan gave them advice. It sounded like they’d been talking through these problems together for a while.

Then, after an hour or so, we got to the demonstration: The was the class where we'd get to see what extended orgasm looks like.

Everyone gathered around as Alicia lay down on her back with Erwan sitting next to her, and then he began to glide his hand over the air above her, without even touching her. She was moaning and her toes and stomach were twitching, and he explained that she was already experiencing "extended orgasm." Her reaction intensified as he put a finger in her vagina and rubbed the other one over her clit. Then, he pressed on her legs and she calmed down. What had I gotten myself into?

Afterward, we all shared "frames" from the demo that we liked — mine was when Erwan joked that orgasm was a lot like a dance. I found myself grinning like an idiot as I talked to the person next to me, and others were wearing the same expression. The feeling in the room wasn’t so much sexual as warm and fuzzy. It was as if the demo had flooded our brains with oxytocin.

The goal with extended orgasm was to instead stay at the top, simultaneously excited and relaxed, experiencing involuntary muscular contractions and other signs of being in an "involuntary state" without the crash.

After that, Erwan had us break into pairs, with one person lying down and the other sitting beside them. The sitting partners held their hands above the ones who were lying down so they could practice touching their partners without actually touching them (with clothes on this time). I couldn’t help but laugh. It looked like people were trying to work some sort of voodoo magic on one another. But when it came my time to lie down, I decided I'd might as well throw myself into it. I imagined how I’d feel if my boyfriend's touch could be transmitted to me through the air, and I started to feel subtle waves of pleasure in different parts of my body. Maybe it was my imagination, but it was a sweet thing to imagine.

It was the private session we'd scheduled afterward that I was really looking forward to, though. As the guests were trickling out, Erwan asked me what I wanted out of the session. It was simple: I wanted to learn to experience extended orgasm. He and Alicia explained to me that normally, people tense up as they reach orgasm, leading them to stay in this state for only a split second before crashing. The goal with extended orgasm was to instead stay at the top, simultaneously excited and relaxed, experiencing involuntary muscular contractions and other signs of being in an "involuntary state" without the crash.

Then, it was the moment of truth: The time came to take my pants off. In front of total strangers. Yet somehow, I was surprisingly comfortable. In this setting, sex wasn't taboo. There were no taboos.

My boyfriend begun by pressing on my legs to “ground” me. Then, I experienced what I usually do when he touches my legs or torso: I started laughing because it tickled. Normally, I just tell him to stop touching me there. But this time, Erwan and Alicia told me to let the laughter out and try to feel it deep in my stomach. As I did, it got stronger and stronger. I was shaking and laughing like a hyena. Tears started pouring down my eyes. They told me to just keep letting it out, and even more emotions started flooding in: fear that my boyfriend would hurt me, nervousness about the whole situation, appreciation for Erwan and Alicia’s help. And somehow, all these feelings seemed hilarious.

Erwan then taught my boyfriend the extended orgasm technique: one finger inside my vagina, one holding back my clitoral hood, and another rubbing my clit. He also taught me how to communicate with him: Always give positive reinforcement before any negative feedback.

Despite all the attention my clit was receiving, orgasming was the last thing on my mind. In fact, I could not even bring my attention to my genitals. All I could do was laugh. On top of that, my teeth were chattering uncontrollably.

That’s when Erwan said, “You should be proud of yourself — you’ve just experienced orgasm for longer than most women on the planet.” I’d experienced what? Clearly, he was defining orgasm very differently from me. I’d felt almost nothing down there. I had felt a sort of emotional climax, though. I felt giddy, unblocked, free to be spontaneous, energized, and excited, as if I’d just drank a cup of coffee.

I was just letting my body do what it wanted. And it felt fantastic.

Afterward, Erwan reiterated that I’d indeed experienced extended orgasm. My vagina had even been contracting, he said. My boyfriend confirmed it, though he said it was possible the laughter was just causing my whole body, including my vagina, to move. When I said I didn’t feel it at all, Erwan explained that sometimes, orgasm can get stuck in other parts of the body, including the mind — hence my giggle fit. He explained that this usually stems from blocked sexual energy or uncomfortable emotions connected to sex or intimacy, adding, "Being human is a big deal."

While I wouldn’t have called this an orgasm myself, the idea of "extended orgasm" did seem more plausible under his definition. I really felt as if my body had gone into an involuntary state. I wasn’t controlling my laughter or my tooth-chattering. I was just letting my body do what it wanted. And it felt fantastic.

On the way home, my boyfriend and I alternated between joking about the idea that my laughing episode was actually an orgasm and wondering if Erwan was onto something. When my teeth chattered from the cold, he joked, "stop having orgasms in public!"

We tried the technique on our own a few days later, and I did have an orgasm, though not an extended one by any definition. No laughing fits or tooth-chattering this time — which was actually disappointing.

The experience I'd had days before may not have led to a physical release, but it did lead to an emotional one. And honestly, that was even better. However you want to label it, we could all stand to go into an involuntary state from time to time.