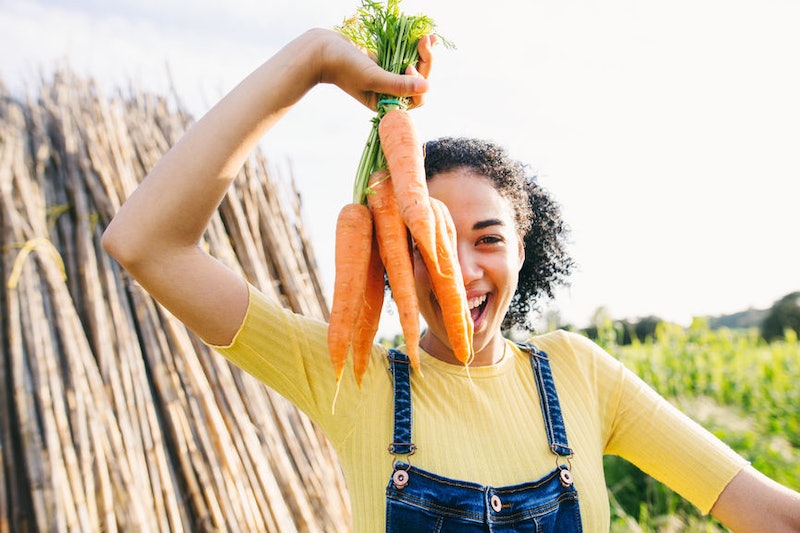 I can imagine many people are thinking of kickstarting 2019 with the goal of becoming vegetarian or vegan, without realising its actually pretty difficult to change your diet so suddenly. Old habits die hard after all, so what can you do to make sure you stick to your goal? You could go half and half. Half vegan, half not vegan. Turns out quite a few people have had this idea, and it's even got a name. So what is flexi-veganism, and how do you make the change?

Often referred to as flexitarianism, it's basically having a "predominately plant-based diet with the occasional addition of meat and fish," according to the Evening Standard. If you have dietary restrictions with certain fruits and veggies or need specific proteins and other nutrients from meat and fish, it's the most beneficial option — as long as the animal products that are consumed are "ethically sourced and environmentally friendly." Yes, that can be expensive, but if you're only eating meat a couple days of the week, it works out in the long run.

It's also extremely beneficial for the environment, too. If everyone adapted to this diet in 2019, "greenhouse gases from agriculture could be reduced by more than half, which would avoid pushing the ecosphere towards the brink of collapse," the Evening Standard explained.

And according to a study published in Nature by Marco Springmann and colleagues at Oxford University, "the food system is a major driver of climate change," and it's mainly down to "excessive nitrogen and phosphorus inputs" from production of food and land use. In the study, the team analysed ways in which these effects could be reduced, which included "dietary changes towards healthier, more plant-based diets," alongside adapting and improving technology to reduce food waste.

While "no single measure is enough to keep these effects within planetary boundaries simultaneously" — i.e. no one thing will save the planet from environmental damage — "a synergistic combination of measures will be needed to sufficiently mitigate the projected increase in environmental pressures."

Even though it's down to those who produce our food to make sure it's being ethically produced with improved technology, consumers still have the choice in what they eat and buy, and can also influence how companies change their practices by shopping in places that support these values.

Even if you don't want to go down the flexi route, you can always make sure that your diet is sustainable. As part of their Livewell campaign, the World Wildlife Fund have made it clear that something needs to change to save the planet. "It's true livestock has a high environmental impact, but the main debate is about sustainable versus unsustainable food choices," the charity explained on their site. "It's about balancing your diet, not necessarily eliminating foods."

From going full on vegan or vegetarian to adapting to a flexi lifestyle, it's all about making sure that you can live a healthy life on a healthy planet. I mean, who doesn't want that?