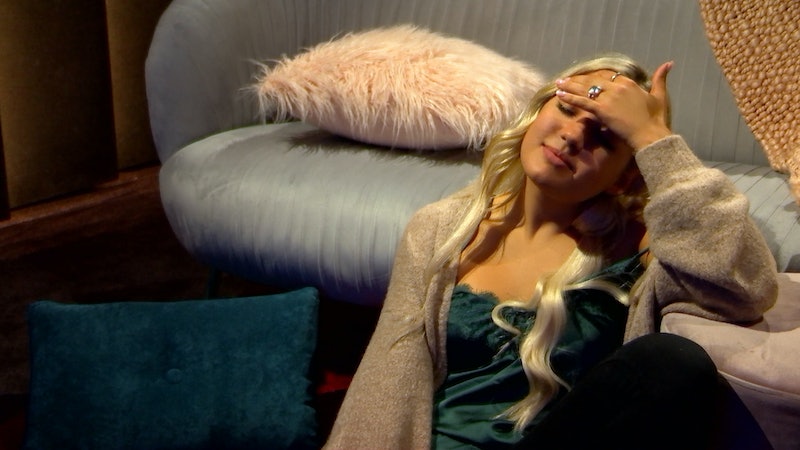 Spoilers ahead for Episodes 1-9 of Love is Blind Season 1. Giannina from Love is Blind is just as obsessed with watching the show as you are — even after living through the experience firsthand. "Fueling up for some errands and then [marathoning] #loveisblind on @netflix for the 102nd time causeee what else are Sunday's for," she captioned a recent Instagram post. On the same day, she tweeted, "what is sleep? addicted to @LoveisBlindShow." She even rewatched the series while getting her hair done recently, according to her Instagram Story. The woman just can't get enough.

Aside from watching herself on Netflix post-filming, Giannina has returned to her life as a self-described "soulpreneur." She's listed on Love is Blind as a small business owner, though it's unclear exactly what kind of business she owns. She mentioned to Damian that social media is a big part of what she does, and according to LinkedIn, her professional history is in social media consulting, so it's likely something within that field.

It also sounds like she struck out on her own somewhat recently. In July 2019, Giannina shared a photo of herself in front of a mural that read, "BE YOUR OWN BOSS." She captioned the post, "Somehow didn’t die and made it a full year brb, gonna go get coffee in my pjs and grind. it. OUT."

As for her relationship with Damian, there's still one more episode left in Love is Blind. When the show last left off, Giannina had said "I do," while a teary-eyed Damian was looking pretty distraught and panicked. That could be a red herring, but it's worth noting that the two don't follow each other on Instagram.

Still, Giannina seems happy with how things panned out. "The energy surrounding these vulnerable and unexpected moments between people looking to find love, within each other and ourselves, has been absolutely breathtaking," she wrote in a post on Valentine's Day, following the show's premiere. "There's so much that goes through me reliving my personal moments with you on screen and I've seen so much kindness from it my heart could burst. our journeys are all different, being accepting of ourselves is never ending, and there is always beauty in our flaws. keep your hearts open and happy Valentine's Day lovers."

She may or may not have found long-lasting love in the experiment, but Giannina definitely found more love for herself.