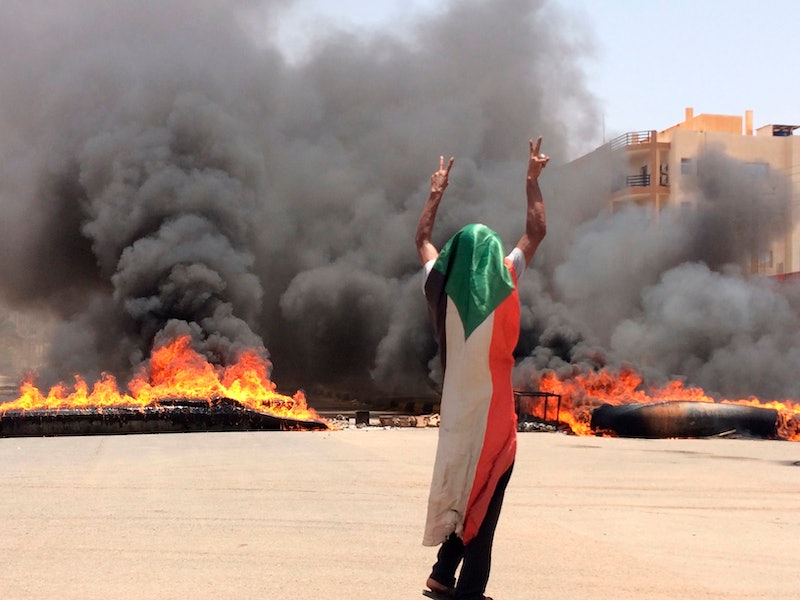 If you spend any amount of time on social media, you may have noticed one hashtag appearing popping up: #IAmTheSudanRevolution. Since early June, civilian protests in Sudan have resulted in murder and sexual violence by military forces looking to start a new government. The new bout of conflict started soon after long-time Sudanese president Omar al-Bashir was removed from power and arrested by the military, reports the Independent.

The former president had been in the role since 1989 and, according to the New York Times, is allegedly responsible for the genocide in Darfur that resulted in the deaths of hundreds of thousands of people. He was also allegedly linked to terrorism after hosting Osama bin Laden in the '90s. Following al-Bashir's removal, it was agreed that a civilian rule would be put in place. However, a Transitional Military Council was soon set up.

Talks between civilians and the military over who would have lasting power fell through, leading to a two-day strike by the Sudanese Professionals Association (SPA) and other civilians. On June 3, a pro-democracy group staged a peaceful sit-in protest in front of the military headquarters in Sudan's capital, Khartoum. Paramilitary and security forces violently raided the protest, killing 52 people and injuring 784 others, according to a Federal Ministry of Health and World Health Organisation report.

The same report states that two hospitals in Khartoum and another in Sudan's second largest city, Omdurman, halted the treatment of wounded civilians after being "intimidated" by security forces. The real number of deaths and injuries are therefore thought to be higher. A doctors' organisation that helped lead the protests told the New York Times that 40 bodies had been pulled out of the river Nile.

Women in Sudan have also reportedly experienced horrendous levels of sexual and gender-based violence in the period since the attack. 20-year-old student Waad Babikir had heard these reports, telling Buzzfeed that, in the first few days, forces "were literally treating people like prey." Doctors in the area said that military groups had also carried out more than 70 rapes during the June 3 protest, states the Guardian. Again, the real figure is thought to be higher due to the number of people too scared or unable to seek medical treatment.

A lot of the violence has come from the Rapid Support Forces; a military group led by a general named Mohamed Hamdan Dagalo. (As the Telegraph explains, he is also known as Hemeti.) As well as committing the above atrocities, the military also instigated an internet blackout, cutting off access to mobile data that Sudanese people rely on, reports Al Jazeera. This has meant that people have struggled to communicate with the outside world.

But social media platforms such as Twitter and Instagram have been used to publicise the distressing news. Beauty influencer Shahd Khidir, who comes from Sudan, recently posted a heartfelt message on Instagram, urging the international community to do more. (Other countries have been accused of inaction over the crisis.)

"I am at my office crying because I have so many emotions in me and I feel horrible. There’s a massacre happening in my country... There is no objective media sharing what’s going on expect for @aljazeeraenglish which had their offices [shut] down," she wrote.

Khidir stated that one of her friends had been "murdered by the Rapid Support Forces." She also said that her best friend was in hiding on June 2 and was missing for four days before she managed to speak to him. He told her: “I was caught, beaten, and abused and humiliated and arrested and had my phone confiscated from me. I am injured currently.”

The SPA has sworn to continue its "peaceful resistance" until the military council is no more, reports the Guardian. The group's original hope was to implement a fair transition time before elections take place.

A number of fundraisers have been set up to provide much-needed food, water, and medical supplies to the people of Sudan. Bakri Ali, a member of the University of Khartoum's Alumni Association, has raised over £200,000 via a Facebook donation page. A group of Sudanese people in Manchester have also raised more than £50,000 for the Sudanese Doctors Union.

Raising awareness on social media can also help the cause and prove that no human rights breach will be tolerated.

If you have been affected by sexual assault or harassment contact Rape Crisis on 0808 802 9999 or visit their website.