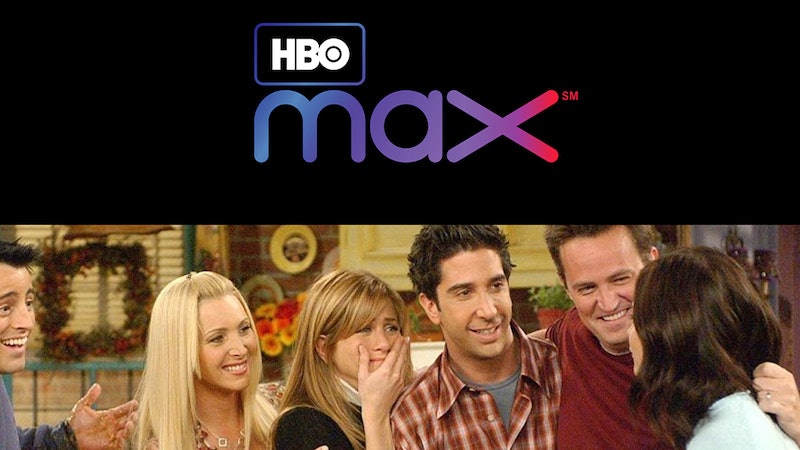 Breaking news: WarnerMedia is collaborating with HBO and dipping its toes into the streaming game with a new digital network called HBO Max — and by "dipping its toes" I mean jumping into the game headfirst with a boatload of content. You may have heard about the news that Friends is leaving Netflix in 2020 to join HBO Max when it launches, but that's not all there is to know about this future streaming platform. In addition to all 236 episodes of Friends, the site will also feature exclusive new shows, and old favorites from both the WarnerMedia and HBO platforms and archives.

If you're not already familiar with what lives in the WarnerMedia archives, you can expect to see programing from Warner Bros., New Line, DC Entertainment, CNN, TNT, TBS, truTV, The CW, Turner Classic Movies, Cartoon Network, Adult Swim, and much more. This is all in addition to the content you'd expect from HBO, which is HBO original programming, on-demand films, and the ability to watch some primetime HBO shows live. (So yes, now there's HBO GO, HBO Now, and HBO Max.)

In addition to holding exclusive streaming rights to Friends, HBO Max will also exclusively stream all episodes of The Fresh Prince of Bel Air and Pretty Little Liars. As far as original programming goes, you'll find the new shows from The CW including Batwoman and Katy Keene (an upcoming Riverdale spinoff), as well as two upcoming, untitled film projects from the Reese Witherspoon-founded Hello Sunshine production company.

HBO Max is officially scheduled to launch commercially in spring of 2020, and at the time of launch, will already be carrying 10,000 hours of premium content. In a press release on Tuesday, July 9, 2019, the company revealed, “Anchored with and inspired by the legacy of HBO’s excellence and award-winning storytelling, the new service will be 'Maximized' with an extensive collection of exclusive original programming (Max Originals) and the best-of-the-best from WarnerMedia’s enormous portfolio of beloved brands and libraries."

Already can't wait to sign up? Here's a few of the other shows we have to look forward to on HBO Max:

Starring Ansel Elgort, Tokyo Vice is based on Jake Adelstein’s nonfiction, firsthand account of his time as a journalist in Japan covering the Tokyo Metropolitan Police.

A one-hour thriller series based on the novel by Chris Bohjalian, which follows a flight attendant who wakes up in a strange hotel room and finds a dead body — with no memory of what happened. The project will star Kaley Cuoco, who is also executive producing alongside Greg Berlanti.

A 10-episode half-hour romantic comedy anthology series starring Anna Kendrick, who will also executive produce alongside Paul Feig. It's not too clear what this project will be about, but Kendrick's statement in the HBO Max press release gives a little insight: "WarnerMedia has three things going for it with this new streaming service. One, they have an incredible history and legacy of storytelling. Two, they’re super future-focused and trying to be the best. And three, they’re letting people like me embarrass myself episode after episode until I find love. I couldn’t be more excited to be a part of this family."

TL;DR: HBO has a new streaming service on which Anna Kendrick will be "embarrassing" herself, so yeah, we gotta sign up as soon as it becomes available in Spring 2020.

More like this
Here’s Everything Coming To & Leaving Netflix In July
By Grace Wehniainen
15 Years Of The iPhone, In Pictures
By Emma Carey
How To Take A .5 Selfie On An iPhone
By Emma Carey
How To Come Out Online, According To Trevi Moran
By Melanie Mignucci
Get Even More From Bustle — Sign Up For The Newsletter