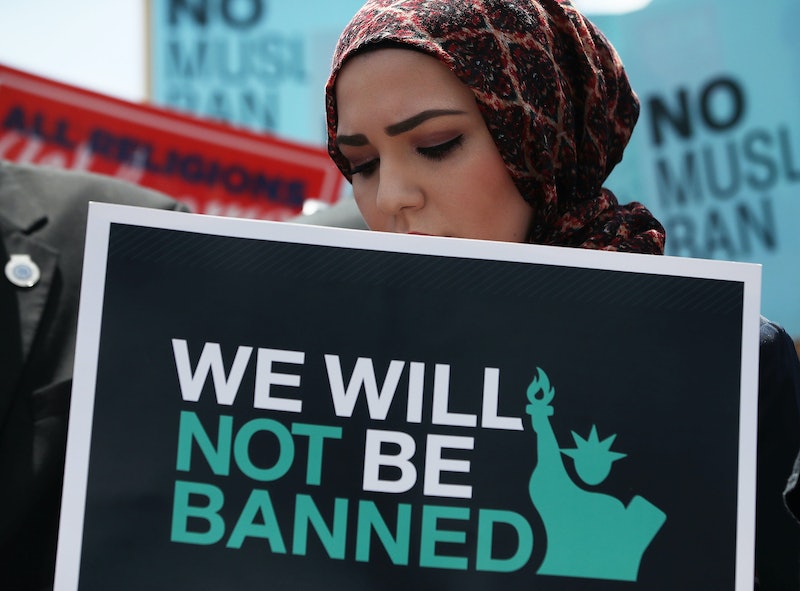 Watching or reading about the daily news that breaks under the Trump administration can be, for lack of a better word, stressful. Current news can be shocking, daunting, and straight-up heartbreaking. And, beyond the immediate shock or sadness you may feel upon reading a breaking news push notification, it can have a longer lasting, detrimental effect on your mind that mental health professionals are beginning to recognize, called "headline stress disorder," that encompasses both headline fatigue and an increased stress response.

Though an unofficial diagnosis, the term “headline stress disorder” was first coined by psychologist Dr. Steven Stosny in a 2016 op-ed written for the Washington Post, following the presidential election. “For many people, continual alerts from news sources, blogs, social media and alternative facts feel like missile explosions in a siege without end," Stosny explained in the piece, emphasizing that in many ways, current news can leave us feeling helpless to create change.

On NBC News, iTherapy psychologist Dr. Jana Scrivani further explained why “headline stress disorder” feels all too common: “Being tuned into the twenty-four hour news cycle may fuel a lot of negative feelings like anxiety, sadness and hopelessness. Subjecting ourselves to an endless barrage of tragedies and trauma can foster a real sense of being out of control,” she says. The question then becomes, how to stay knowledgable about and engaged with current events, while protecting your mental health.

It’s a challenge, to say the least. In a study released by the American Psychological Association (APA) in 2017, nearly 57 percent people in the U.S. reported that the current political climate was a “significant” source of stress. What’s more, 63 percent of the study participants reported the future of the U.S. was a “somewhat significant” stressor in their lives. Furthermore, the research revealed that between Aug. 2016 and Jan. 2017, Americans’ overall stress level rose from 4.8 to 5.1 on a ten-point scale.

The Guardian reported in 2013 that being in a constant state of panic, as unrelenting exposure to panic-inducing headlines can induce, can trigger your limbic system — causing symptoms such as nervousness, agitation, and fear. Hence, why headline stress disorder may feel so similar to anxiety for some people. Not to mention, chronic stress can also cause physical symptoms such as muscle pain, a weakened immune system, gastrointestinal health issues, changes in heart rate, and more. Meaning, taking a break from the news is an important step to keeping your health and wellness in check.

To avoid this stress, it's advisable to check out of the news for a little bit; turn off push notifications on your phone, or even set a few hours out of the day where you're consciously away from your phone, laptop, or other electronics. Try to read up on some inspiring news, or simply watch cute animal videos.

But when each push notification feels more dire — and more high stakes — than the last, it can feel just as hard to tear yourself away from the news as it can to keep scrolling. Consider limiting your consumption of the news to just a few hours of the day, or avoiding social media that provides an endless feedback loop of panic-inducing sentiments. Taking action can also help to mitigate feelings of helplessness in the face of extreme bad news; donate to organizations or people who will be directly affected by the political decisions currently being made, or sign up to volunteer for a few hours a week in your community.

Checking out of the news cycle every once and a while doesn’t mean you care any less about the issues, or injustices that are plaguing the world: In fact, taking a break from the constant barrage of media might be just what you need to revive your energy and mental health in order to keep taking a stand against the unjust events going on. Don’t let headline stress disorder burn you out; let it inspire you to take a stand against what's causing the headlines, instead.

More like this
11 Exercises For Dowager's Hump That'll Help Your Neck Posture
By Carolyn Steber
Kourtney Kardashian’s Wellness Guru Shares Her #1 Tip For Better Health
By Taylor Jean Stephan
10 Primal Movement Exercises That'll Improve Your Mobility
By Carolyn Steber
Here’s What Health Means To People In 2023
By Isabella Biedenharn
Get Even More From Bustle — Sign Up For The Newsletter
From hair trends to relationship advice, our daily newsletter has everything you need to sound like a person who’s on TikTok, even if you aren’t.