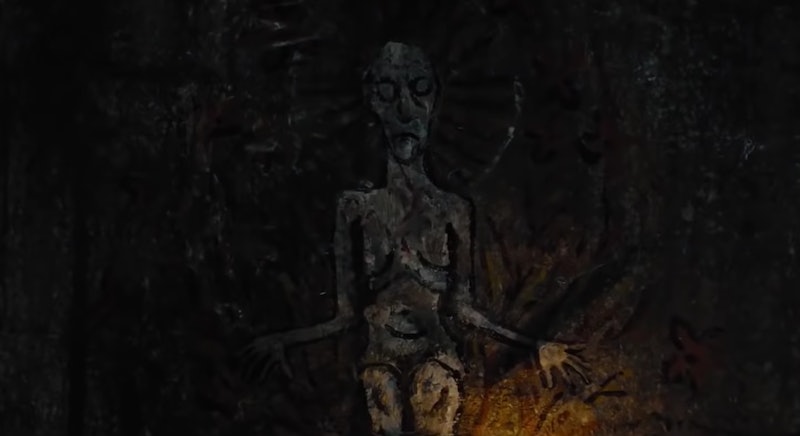 WARNING: This article contains plenty of spoilers for Apostle. Folk-horror gets a gory update in the latest from director of The Raid Gareth Evans. Netflix's Apostle opens in 1905, with news a young woman's been kidnapped by a religious cult; her family refuses to pay ransom, sending estranged brother Thomas (Dan Stevens) to infiltrate and save her instead. Apostle's setup is speedily dispatched to get Thomas on the island, where he discovers a self-proclaimed goddess-worshiping utopia, led by Prophet Malcom (Michael Sheen). Thomas quickly uncovers lies and secrets just beneath the community's virtuous facade, but he also finds their goddess is a lot less abstract than most cults'. Named without a name, the source of the island's power and object of the cult's attentions good and evil, what is the goddess in Apostle exactly?

Prophet Malcom describes "Her" to his flock as a benevolent power, the soul of the island who saw fit to rescue him and two other prison escapees from certain death, and who bestows blessings on the villagers in the form of crops and flocks. In turn, the villagers offer praise, devotion... and large quantities of their own blood, dripped into glass jars handed to every newcomer on arrival, along with a loaf of bread and heretical bible.

Following the three founders into the island's densely wooded center, Thomas discovers a house overrun with greenery, guarded by a terrifying attendee to a withered crone half-covered in tree growth. That she has supernatural powers is clear — as she guzzles blood, new tendrils sprout instantly from the tree — but she's also the cult's prisoner as much as Thomas' sister. She and she alone controls the ultimate fate of the island's inhabitants — all crops are failing and all animal births are stillborn monstrosities, meaning the islanders will soon starve if nothing is done.

Gods to be appeased with sacrifice is an ancient idea that even modern religions didn't eradicate. Old Testament patriarch Abraham nearly sacrificed his beloved son Issac until God stepped in and said "just testing!"And Christianity's entire existence is predicated on another son-sacrifice. While later religions did it to win favor with the gods, earlier beliefs tied it more directly to the land itself. Animism, the belief that objects living and otherwise contained their own spirit, was common across Europe before Christian times, and even after many folk-festivals and customs were based on pagan traditions. Trees, rivers, even the land itself had a spirit, and were treated accordingly.

A bad harvest could mean death for everyone, so to ensure fertility, sympathetic magic, an ancient idea that like produces like, was invoked. If you wanted the earth to bear fruit and give up its children to you, you'll have to give something back to the earth. Fertility, death, and sacrifice were inextricably interlinked, and to induce one, you needed to act on the others.

"Her" could represent any of a number of fertility spirits throughout the ages, but since Apostle takes place off the coast of Europe and was shot in Wales, it's likely referencing those of the Celtic people - Epona, Brigid, Damona — the list of fertility goddesses known to be worshipped is extensive. But they're usually represented as women in the prime of their reproductive years. Her's ancient age could mean she's a Dying God, a god who follows a continuous cycle of death and resurrection, but whose renewal has been interrupted or stopped by outside forces.

Her reveals herself to Thomas, and their understanding of each other hints that even if this isn't the case, and Her had merely reached the end of her particular time, there's still to be a resurrection of a life-creating god once again.

More like this
'Doctor Who’s New Star Is Already Huge On TikTok
By Maxine Harrison
What’s New On Netflix: A Victoria Justice Rom-Com & The Return Of David Letterman
By Arya Roshanian
'Black Mirror' Season 6 Is Reportedly In The Works, Here’s What To Expect
By Maxine Harrison
What Is Mandy Moore’s Net Worth?
By Hugh McIntyre
Get Even More From Bustle — Sign Up For The Newsletter