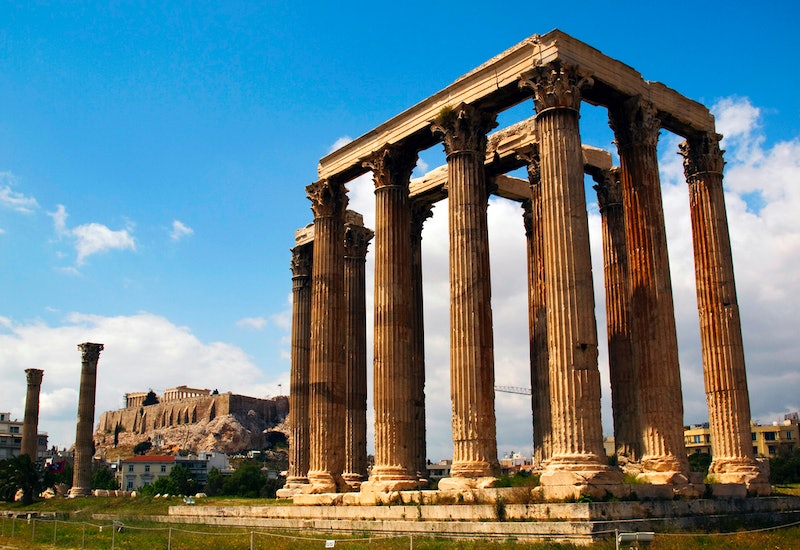 If you're into mythology, you know you don't have to look any further than Googling "sex stories about Greek gods" to find something that will tickle your naughty bits. It's safe to say that the Olympians really don't ever stop f*cking, and the ones who somehow miraculously weren't having sex still managed to watch the ones who were. But that's so totally not creepy, because they're gods, get it? OK, it's still creepy.

Sure, we all know how Zeus can basically have sex with anything, as anything, but what about romantic love in the Greek pantheon? Were there any epic romances to go along with the tales of murder and betrayal?

Well, actually, yes. Greek mythology is full of power couples and tragic lovers, and their stories will give you all the relationship goals. Even single folks can move on from these classic tales with a better understanding of how romance is supposed to look.

The eight couples on this list will show you how to get past your biggest fights, honor lost lovers, and wait for the person you know is coming back for you. Ultimately, the Greek gods were pretty human, so you're bound to see some of your own experiences reflected here. Trust me.

OK, let's start off with a tragedy. Hyacinth and Apollo were lovers. Zephyr liked Hyacinth, and was jealous that he only had eyes for Apollo.

One day, when Hyacinth and Apollo were throwing a discus, Zephyr intervened. He blew the discus off-course, causing it to strike and kill Hyacinth. Devastated, Apollo would not allow his lover's body and soul to be carted off to Hades. He crafted a flower from Hyacinth's spilled blood, and, by some accounts, Apollo's own tears stained the petals.

Reading about Hyacinth and Apollo will make memorializing your mate, or vice verse, one of your top relationship goals.

Pygmalion was a sculptor who hated women. He found major flaws in every woman he met, and decided they weren't worth his time. I know, he sounds like a real winner, doesn't he?

Throwing himself headfirst into his work, Pygmalion carved Galatea out of ivory. She was more beautiful than any breathing woman, and he spent countless hours working on her. Pygmalion grew deeply affectionate toward his statue, and soon realized he had fallen in love. But even though he dressed Galatea and attended to her at all hours, she remained cold, lifeless ivory.

Aphrodite noticed Pygmalion's unrequited love, and, after his next sacrifice to the goddess, she rewarded his devotion by bringing Galatea to life. They lived happily ever after, even producing a son for whom one of Aphrodite's sacred cities, Paphos, was named.

Pygmalion and Galatea's story makes you never want to give up on love, because you could find it in the last place you'd expect.

Halcyon and Ceyx were the perfect couple. They were the children of minor gods, and were benevolent rulers of Trachis. Everyone admired both their good looks and their devotion to each other. In the privacy of their bedroom, however, Halcyon became "Hera" and Ceyx became "Zeus." Their fun insulted and angered Zeus, who decided that the two needed to be punished.

When Ceyx set out on an ill-advised voyage, Zeus summoned a hurricane to drown his ship. Ceyx prayed that his body would wash ashore so that his wife could bury him properly. Meanwhile, Hera answered Halcyon's constant prayers by sending her a dream to inform her of her husband's fate. Upon waking, the queen ran to the beach, where she found Ceyx's body. After her husband's funeral, Halycon drowned herself in the same sea, unable to live without her beloved.

The couple's love for each other amazed the Olympians, and even Zeus felt a pang of regret for what he'd done. He transformed Halcyon and Ceyx into kingfisher birds, so that they could continue on together.

Halcyon and Ceyx's devotion to one another lasted beyond death, and that's a relationship goal we can all get behind.

The loveliest of her sisters, Psyche was so beautiful that Aphrodite was jealous. The goddess sent Eros to the young woman's bedchamber with a potion that would make all men avoid marrying her. As he enchanted Psyche with this potion, Eros accidentally poked her with one of his arrows, causing her to stir. He grew flustered, and accidentally poked himself as well, before sprinkling her with a potion to cause lifelong happiness.

Aphrodite's plan worked. Psyche's parents could find no man to marry their lovely daughter. Consulting the oracle, they learned of a creature living atop a mountain who would be her husband. Psyche packed her things and headed off to meet what sounded like a terrible fate.

When she grew close to the mountain, Psyche was carried to the top by Zephyr. Her husband's palace was a paradise. Though he only met with her at night, Psyche's husband was a wonderful lover, but he never permitted his wife to see his face, and made her promise never to peek. She agreed. Little did she know, she was married to Eros.

Psyche was content at first, but she soon grew despondent from being left alone all day. She asked Eros to allow her sisters to visit, and he agreed. Jealous of their sister's good fortune, Psyche's siblings convinced her that she was married to a monster who was only fattening her up to be his dinner. The sisters counseled her to keep a lantern and a knife by her bed that night. She could get a good look at him, they said, and cut off his head if he was evil.

Following her sisters' instructions, Psyche learned her husband's true identity. Hurt that she had broken her promise, Eros flew away. Psyche returned to her parents' home. Heartbroken, she prayed to Aphrodite for Eros' return. The goddess gave Psyche a series of impossible tasks, and Eros helped her to complete each and every one.

But the last task involved a box she shouldn't look into under any circumstances. Overcome by curiosity, Psyche peeked inside, only to be put into a coma. Eros woke her, telling her to complete the task and that he would arrange for everything else. He flew to Zeus, and begged him to rescue Psyche from Aphrodite, who would undoubtedly punish his wife for her insolence. With Zeus' blessing, Eros brought Psyche to Olympus, where she received immortality and was allowed to live with her husband in peace.

The way Eros helped Psyche even after she broke a promise should have you swooning, because you know that, even if you and bae have a silly argument, you still need to have each other's backs.

Orpheus was the greatest lyre player in the world. He could charm rocks and rivers with his music. When Orpheus fell in love with Eurydice, he wooed her with his song. Their marriage was brief, however, as Eurydice was bitten by a viper and died shortly after saying "I do."

Devastated, Orpheus journeyed to the underworld to convince Hades and Persephone to return his bride to him. When he played, the king and queen of hell were moved by his song, and they agreed to let Eurydice live again on one condition: that Orpheus not look at her until they were both safely back in the world of the living.

As they trekked out of the underworld, Orpheus began to think it might all be a trick, that the gods were just making fun of him. He resisted the urge to look back, but continued to doubt. As soon as he returned to the living world, Orpheus turned, just in time to see Eurydice falling back into the darkness, lost forever.

Orpheus' blunder is your gain. You can't monitor your partner 100 percent of the time, so you just have to trust that they're always there for you.

Pyramus and Thisbe were star-crossed lovers, born to warring families. Their homes shared a cracked wall, through which they whispered sweet nothings to each other. Having never met in person, the two decided to sneak out at night and meet at a mulberry tree.

Thisbe came to the meeting place first, only to find a lioness with a recent kill. Afraid, Thisbe fled, leaving her veil behind. By the time Pyramus arrived, the lioness and carcass are gone, but the blood and Thisbe's veil remained. Assuming that his beloved was dead, Pyramus threw himself on his sword. Thisbe returned to find his body lying under the mulberry tree. Wracked with grief, she killed herself with Pyramus' blade.

This obvious precursor to Romeo and Juliet will make you more confident in fledgling relationships. I mean, if these two were willing to die for each other without ever having met face-to-face, you can at least sweat less about texting "Netflix and chill?" to a new paramour.

Shortly after the birth of their son, Odysseus left Penelope at home while he went off to fight in the Trojan War. When Odysseus failed to return after the 10-year-long war, however, Penelope soon found her home taken over by 108 suitors. Each man wanted to inherit Odysseus' wealth, and tried to convince Penelope that her husband was dead.

Being the clever woman she was, Penelope put off her suitors' advances by insisting that she must weave a burial shroud for her father-in-law, Laertes. Every day, she locked herself in her room with a loom, and each night, she unraveled part of her work. She kept up this ruse for three years before Odysseus returned.

Dressed as a beggar and 20 years older, Odysseus was only recognized by the family dog when he made it back to Penelope. He asked his wife for shelter and food, and then inquired which of the suitors she intended to marry. She announced to the lot of men that whichever one of them could string Odysseus' bow and shoot an arrow through twelve axe-heads would become her husband.

Of course, only Odysseus himself can do this. When he succeeded, he revealed himself, then went on a killing spree, slaughtering the 108 men who had disrespected his wife and their home for the last 10 years.

Odysseus and Penelope are the power couple we all want to be. If decades of loving devotion wasn't already one of your relationship goals, it is now.

There was once a man who wanted sons so badly that he threatened to kill any girls his wife bore. Afraid for the life of her daughter, the man's wife pretended to have given birth to a son. Named by her father, Iphis was raised as a boy for her entire life.

When it came time for Iphis to take a wife, her father arranged a marriage with Ianthe. Believing her betrothed was a man, Ianthe fell in love. Iphis, in turn fell in love with her bride-to-be. She prayed for the situation to be fixed, knowing that she might lose Ianthe forever once she found out the truth. Iphis' mother, fearing for her daughter's safety, prayed as well.

On her wedding day, Iphis woke up female. But on her trip down the aisle, she began to change. Blessed by the gods who had heard his mother's prayers, Iphis was fully male when he reached the altar. Ianthe was never the wiser, and the two enjoyed a long and happy marriage.

Sometimes changing for a partner can be a good thing. Sometimes. When it is, Iphis and Ianthe's story is your go-to reading selection for inspiration.