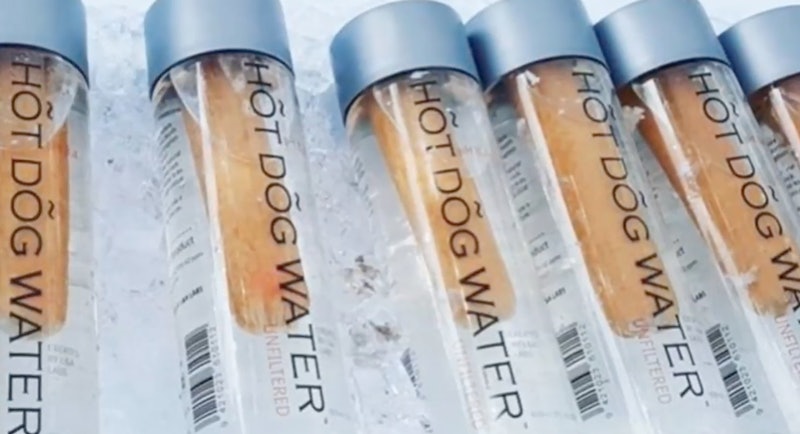 A strange new drink served at the Vancouver, Canada, Car Free Day festival proves that people can be convinced to try anything if it's touted as healthy. Yes my friendlies, Hot Dog Water is a thing, it's more expensive than a bottle of wine, and it sounds super gross. The unfiltered Hot Dog Water — dreamed up by a company of the same name — costs $28, which seems totally bananas considering the fact that you can buy everyone you know a hot dog and serve them regular water for the same price. But, that didn't stop people from drinking this processed meat water.

Canadian news outlet Global News reported that a sign at the Hot Dog Water booth claimed that this miracle drink, which is served in a glass bottle with a single hot dog inside, can help you look younger, reduce inflammation, and increase your brain function. "There’s a fair bit of it that is too science-y for me, but from what I understand from the specialists here working on it, it’s this idea of like-likes-like," Hot Dog Water CEO Douglas Bevans told Global News.

Water isn't the only thing people could buy at the booth. Hot Dog Water lip balm, breath spray, and body fragrance were also for sale. But, why would anyone want their breath or body to smell like hot dogs? Because, it makes you smarter and younger looking, obviously.

If it were April instead of June I would swear that this was a story concocted by The Onion. While the Hot Dog Water was real, it was also a sophisticated experiment in human behavior. And, people who shelled out $38 Canadian dollars ($28 USD) played right into the Hot Dog Water company's hot little hands.

Vancouver website Daily Hive reported that the Hot Dog Water sign also featured a disclaimer that read: "Hot Dog Water in its absurdity hopes to encourage critical thinking related to product marketing and the significant role it can play in our purchasing choices."

The takeaway here is that if it's packaged in a sleek bottle, and promises to solve all of your problems, you'll buy it. According to the National Association of Sales Professionals, there's two reasons people part with their hard-earned money, "to gain pleasure, or to avoid pain."

Hot Dog Water meets both of these needs. By promising to solve all of your health problems, it allows you to avoid pain. Because it touts both younger-looking skin and improved brain function, it triggers your pleasure center. Who doesn't want to look younger and up their IQ by a few points?

Global News reported that Bevans is actually tour operator and an artist, and he created Hot Dog Water as a commentary on the "snake oil salesmen" of health and wellness marketing. Psychology Today cites a study published in the Journal of Consumer Research that calls this phenomena affective conditioning, which is a transfer of feelings from one set of items to another.

"We allow advertisers to have access to our mental world," Dr. Art Markman wrote for Psychology Today. "They have paid for the opportunity to slip information to us about what feels good. That information ultimately affects the way we make choices, whether we know it or not."

On an episode of Mad Med, anti-hero Don Draper says, "What you call love was invented by guys like me to sell nylons." Hot Dog Water was created with the same concept in mind. And, the packaging matters because people are more likely to buy into things that are bright and shiny. If Hot Dog Water were served in a plastic bottle with cut up pieces of hot dog instead of in an attractive glass bottle with a single hot dog, it likely would have been shunned outright.

"From the responses, I think people will actually go away and reconsider some of these other $80 bottles of water that will come out that are ‘raw’ or ‘smart waters,’ or anything that doesn’t have any substantial scientific backing but just a lot of pretty impressive marketing."

If you think you couldn't be fooled into drinking something as gross as Hot Dog Water, feelings of FOMO and YOLO had more than 60 people guzzling the processed meat water during the festival.

According to Marie Claire, other absurd health and wellness trends throughout history include using crocodile dung as an anti-aging cream and bathing in human blood to stay forever young. Even today people take placenta pills and attach leeches to their bodies in their search for the fountain of youth.

The lesson here? If it sounds too good to be true, and it's not backed by scientific evidence, it's likely a product designed to play on your insecurities. You're smarter than that. Don't drink the kool-aid, or in this case, the Hot Dog Water.